For girls, understanding a guy may need more than just experience.

You can date a few guys, but that still won’t help you understand them better.

To actually get to know a guy, you need to have fun, intellectual conversations with him and try to understand the way he thinks along the way.

[Read: 60 get to know you questions in a new romance]

But if you’re in a hurry to know everything there is about a guy and the way he thinks about you, love and his life, these facts about guys are all you need.

When it comes to the opposite sex, guys and girls think along similar lines about many things. But there are several differences too.

For girls, a pleasant looking guy with a lot of charm and a great personality would impress any girl in the very first conversation.

But for a guy, it’s quite different.

At first, it’s the appearance, and then it’s a whole series of stages that makes a guy take his time before falling in love with a girl even if he likes her at first sight.

Read stages of love for guys and how they really fall in love to know more about that.

30 facts about guys to understand them better

Try to understand these 30 facts about guys and relate it with the guy in your life or the guy you like.

And as long as you look for ways to make yourself more likeable using these 30 facts and tips, you’ll definitely be able to impress the guy you like and make him want you more. [Read: 20 circumstances when a guy may never ever like you back]

Make him feel lucky to date you when there are so many other guys who like you and he’ll love you more.

#2 Guys are attracted only by the physical appearances of a girl at first sight. But it isn’t always about a perfect ten body. It could be a girl’s cute smile, the way she flicks her hair or even they way she stares at him from across the room that draws him to her. [Read: How to get a guy to notice you and fall for you wherever you are]

#3 Guys do want to talk about their feelings too. Just because they don’t initiate heart to heart conversations doesn’t mean they don’t like talking about it. Just don’t make him feel threatened by your questions and he’ll definitely open up to you.

#4 It’s every guy’s fantasy to be desired by many girls at once. Almost all guys have fantasized about being mobbed by several attractive girls *in tiny bikinis on a beach* at least once in their lives. [Read: Top 10 sexual fantasies all guys love]

#5 Every guy will definitely take a peek at a girl’s cleavage no matter what he’s doing, when the girl’s not looking!

#8 Guys love girl on girl action. And most guys don’t think it’s cheating if they catch their girlfriend kissing another girl. On the contrary, they may actually be turned on by that!

#9 Guys love sex. But that doesn’t mean they’re always ready for it. Don’t push him against a wall and expect his package to get firm and ready in a second. Putting too much pressure on him may make him lose an erection. [Read: 20 ways to help keep a guy’s erection up for a long time]

#10 Guys hate asking for help, and will avoid taking any help until they feel they can’t do it by themselves.

#11 Guys feel powerful when they make a girl orgasm. The better you orgasm, the more he’ll feel proud of himself and appreciate you more.

#12 Guys love their girlfriends even if they don’t say it often. Guys aren’t always vocal about feelings. But your boyfriend may feel more comfortable letting you know he loves you through his actions than his words.

#13 Guys absolutely love a girl who seems cute and coy at first, but turns into a wildcat when she’s in bed. [Read: 25 ways to look cute and melt a guy’s heart]

#14 Guys are very competitive and suffer from performance anxiety every time they have to accept defeat, be it in sports or in bed.

#15 Guys take a commitment pretty seriously. What may seem like commitment phobia to you could just mean that the guy’s weighing his options very carefully before taking a plunge into a new relationship.

#16 Guys almost always end up straying into another girl’s arms when their psychological and emotional needs aren’t met by their girlfriend over a long period of time.

#17 Guys only pretend like they can’t hear you when they seem busy working or playing. It’s their way of getting out of chores or difficult conversations.

#18 Guys don’t like to be told that they’re not good at something, especially if it’s a guy thing. [Read: Ten things girls should never say to guys]

#19 Almost all guys think they’re really strong and powerful. They hate going to the doctor, and at times, a visit to the doc even makes them feel emasculated.

#20 Guys don’t get it when a girl says something but means something else. If you want your guy to understand what you say, say it straight.

#21 Of all the things men want in a relationship with a girl, respect is the biggest craving of all. Give a guy respect, and he’ll love you more. Take control of the relationship instead and he’ll shrivel into a shell.

#22 Men are easy to manipulate, but all guys hate being manipulated into doing something.

#23 For a guy, his father is his first role model and his behavior is almost always similar to his dad’s, unless he had a bad relationship with his father.

#24 Guys are more emotionally vulnerable, and heartbreaks affect guys a lot more than it affects girls!

#25 The adage is true. The way to a man’s heart is through his stomach. Learn to cook well, and he’ll be smitten by you before the end of the meal.

#27 If you confront your boyfriend’s friend and ask him if your boyfriend’s cheating on you, he will lie for his friend’s sake and cover up for him. Well, unless he cares about you a lot or has fallen for you. [Read: What should a guy do when he likes a friend’s girlfriend?]

#28 Guys love helping pretty girls who need help. It makes their day. After all, gentlemen love damsels in distress, don’t they? [Read: Why guys love girls who ask for help]

#29 A guy will definitely get turned on and stiff in his pants if an attractive girl brushes herself against him “accidentally.” [Read: 10 sneaky ways to seduce a guy who isn’t yours]

#30 Guys can be true romantics if the girl they like plays hard to get the right way.  [Read: The perfect way to play hard to get with a guy]

And now that you know these 30 facts about guys, use these tips in your own relationships with the guys around you, and they’ll definitely like you more and even fall for you! 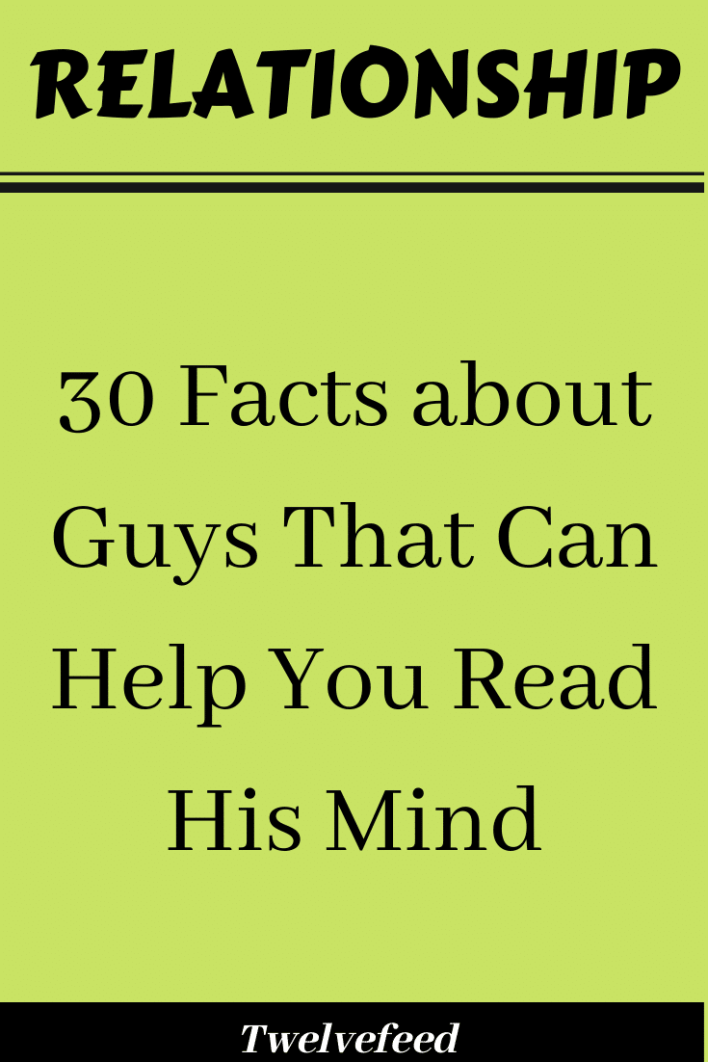 Different Ways to Say I Love You without Saying a Word