Out of personal experience and experimenting, I have come to a conclusion that sometimes it’s not worth your time and energy to get into a relationship with someone you’re dating. You need to be prepared to make a transition from dating to “in a relationship” because as much as you want to think that things will be the same or better, you end up expecting too much.

I have been dating Samuel for a few months now, so it was obvious for me that he was the “right person.” He was promising, he was funny, and he was everything I hoped for in a man, so obviously, my desired path was to move from dating to getting into a relationship with him. Why? I hoped that things would be smooth all the way through – isn’t that what most people dream of anyway?

Well, if you’re dating someone, I really hope for your sake that you’re lucky to have it all smooth and nice. However, I must stress that things are going to change and you will need to invest in your relationship. It’s a simple rule: if a lottery player wants to win the jackpot, he has to buy a lottery ticket.

That logic also applies to your transition from dating to a relationship. This process requires your devotion, effort, energy, collaboration, and sometimes, the ability to be your own psychiatrist, best friend, and fortune teller at the same time. Weird, huh? [Read: 10 signs you’re comfortably going from dating to “in a relationship”]

Unwanted situations during your transition to a relationship

You might think that the road from just dating to a relationship is really smooth because nothing really changes anyway, but that’s not entirely true. It’s going to be a bumpy ride with occasional halts in the form of confusions. So before you take the leap, here are the top five situations you will find yourselves getting into.

#1 Not so casual anymore. Back when you were just dating, it was perfectly fine to “play it by ear,” so to speak. You could go on a date today and not talk to each other the day after. The dating game is filled with these kinds of situations, where you’re free to do as you like as a single person, but you still secretly hope there’s someone who cares enough about you to be consistent.

It feels good to know that you can reach out to your partner, and they’ll reach right back out to you whenever you need them. But in some cases, the feeling that you always need to update your significant other can be suffocating, and to some, it feels like a lot more work than the casual thing you used to have going on. [Read: 16 signs you’re not ready for a serious relationship]

#2 Sexual intimacy as an obligation? When you’re dating, the thought of being sexually active doesn’t worry you much because you know that your relationship is not serious – you’re just dating. But when you’re in a relationship, a lot of people think sex becomes a priority because it somehow binds the two people together.

Honestly speaking, sex has nothing to do with being in a relationship. What matters is if you’re ready to be sexually intimate with your partner. Unfortunately, no one can tell you if having sex with someone is the right thing to do. That burden falls on you.

The only thing I will tell you is that when you transition from dating to a relationship, you might think that it’s finally the “right” time to have sex or you have to have sex. If you think that by having sex, you’re going to achieve something, you’ll be sorely disappointed. You should have sex only when it feels right for you. You are under no obligation to drop your pants or jump into bed with your partner, simply because you’re in a relationship with them.

#3 Meeting the parents. Somehow, and unfortunately, it becomes a norm to meet your partner’s parents when you’re in a relationship, but not when you’re just dating. A lot of people panic for no reason, to be honest – you’re just meeting their parents, not joining the army! While some partners will not force you to have dinner with their families, others will take it upon themselves to have you meet their parents for “further evaluation.”

Back when you were just dating, the only people involved were the two of you, and maybe a handful of close friends who know that you’re dating. But when parents get thrown into the mix, it suddenly becomes a family affair. You get friend requests from your significant other’s parents, you get invited to family events, and you get to meet extended family. It’s like you’ve automatically added a bunch of new people into your social network, simply because you dated one of their family members. [Read: 7 clear signs it’s time to meet the parents]

#4 Interests, goals, and the compromising they entail. This was something that bothered me when I transitioned from dating to a relationship. I used to be a freelance event organizer, and my partner was very okay with me traveling to places to organize events, and he was fine when I was in the company of strangers. He didn’t say a word if I didn’t answer his calls because I was busy working or I was fast asleep. But when we transitioned to a relationship, suddenly things became a little more serious.

Now my traveling started to annoy him because I didn’t give him enough attention. Suddenly, being with strangers made him so jealous that he’d want to be there with me, like a bodyguard. If I failed to answer his calls, he’d demand to know why!

Sometimes, no matter how cool your partner may have been about what you do, their true opinions on it and their true colors will show up only when you’re already in a relationship. Why? Because you’re already somewhat committed, and you wouldn’t break up with them over something as trivial as their petty jealousy or their indifference towards your job or their contempt for your pet cat, right? Sadly, the best foot forward phase ends when you get into a serious relationship. [Read: New relationship advice to have a perfect start to your romance]

#5 Suddenly people have a voice. When you’re just dating, everyone thinks that you’re not really serious yet because you aren’t official. But when you transition to an official relationship, suddenly everyone’s opinions have to matter. A ton of people will give their *sometimes unwarranted* two cents about your relationship.

Suddenly, your significant other’s job, income, family background, thoughts on marriage, and even their pet warrants some sort of scrutiny. While the people giving their opinion may just be looking out for you, it can still be pretty annoying. [Read: 13 signs your friends are ruining your relationship]

Dating around and looking for “the one” may seem like such a chore, but the transition from dating to being in a relationship can sometimes be just as daunting. My advice is to just take it slow, and give yourselves some time to adjust. 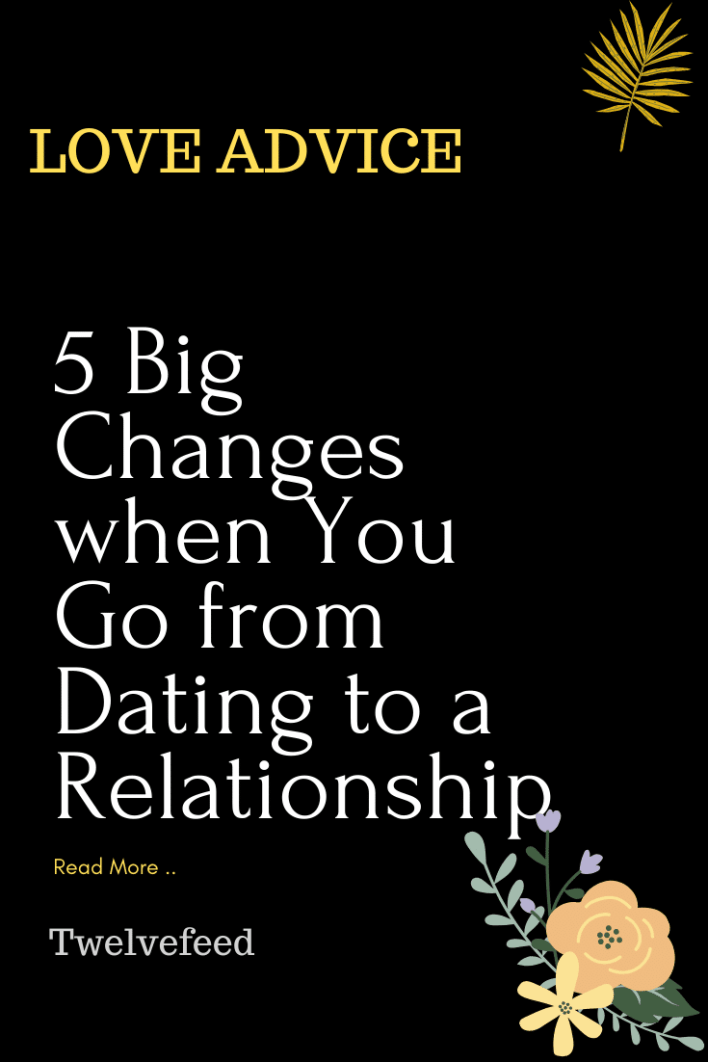 10 Compliments for Women that Will Definitely Backfire