We all want to believe in true love, but sometimes it gets tough! Many of us take solace in some of the most beautiful relationships the celebrity world has graced us with. Sadly, these are often characterized by being fickle, constantly surrounded by cheating scandals and drama – oh, so much drama.

It’s very important to remember these people aren’t just stars, they are humans. Living your life in the spotlight can’t be easy, especially when every move you make is scrutinized by thousands and thousands of people. Being able to keep a healthy, long-lasting relationship within this environment can’t be easy. Some celebrities somehow make it work, while others…not so much.

There’s no better time than the present to take a good look at both sides of the spectrum of A-list relationships. So, buckle up!

Britney Spears quickly went from being America’s sweetest pop star to a full-on celebrity disaster really quickly. We can’t really blame her for her much-publicized 2007 meltdown. It pretty much represented the very dark side of fame, especially when you start as young as Spears did (Mickey Mouse, anyone?).

One of the events that surely led to Britney’s fall from grace was her whirlwind marriage to long-time friend Jason Alexander. The two knew each other for years, but they were never romantically linked. Actually, Britney had just broken up with Justin Timberlake when the whole thing went down. The two got drunk and ended up getting married in Las Vegas… a marriage the lasted 55 hours.  That has to be some sort of record!

These two melt our hearts every time they go out together in public. Whether it’s Portia serving all sorts of looks on the runway or Ellen making us burst our seams with laughter, this pair is nothing short of absolutely iconic! The best part? They have been together for 15 years!

DeGeneres and De Rossi became an item in 2004, although Portia told Oprah herself she was infatuated with Ellen since 2000 but felt like she couldn’t tell her (because the world didn’t know about her sexual orientation). We couldn’t be happier that she eventually did, though! The two tied the knot four years after getting together, and their story is worthy of a Disney movie.

This one made headlines all around the world. That’s what happens when you’re a high-profile member of such a famous family! Because the Kardashians are true reality stars, we got to see the whole story of Kim and Kris’ relationship develop on screen, including their lavish wedding.

The pair were together for seven months before they got engaged in May 2011. There was so much glitz, glam, and publicity surrounding the upcoming wedding, no one paid too much attention to the actual relationship. When the marriage ended after only 72 days, we couldn’t help but wonder whether or not the whole thing was a scam. From what we got to see after the official announcement, it looked like the two simply weren’t compatible to begin with.

A lot of people still get surprised when they find out these two are married. Because of his iconic role as Borat, it’s understandable that we still become a bit bemused when we’re reminded Sacha is just an actor, laying it all out there for a role. But he is. He is also married to A-lister Isla Fischer, the redheaded beauty herself.

Just in case you’re wondering how deep their love is, after they met way back in 2002, Isla spent three years studying Judaism just so they could be wed.  They actually got engaged in 2004, after two years of dating, and finally made it down the aisle in a beautiful ceremony in 2010. They might have been married for 9 years, but they’ve been going strong for 17!

The celebrity world is full of surprises, and there are many A-listers out there who gave it a go with their relationship. We either never heard about it or it was so irrelevant –and, in this case, short– that we simply forgot along the way.

That’s the case with singer Demi Lovato and Miley Cyrus’ lesser-known brother, Trace Cyrus. When Demi was still in the early stages of her career as a Disney star, the two dated for a brief amount of time. Very brief, in fact. Reportedly, the pair were only together for a month before they called it quits, due to their busy schedules and constant traveling. Who knows, if things had turned out differently, perhaps Demi would now be calling Miley “sister”.

We first fell in love with Catherine when we saw her alongside Antonio Banderas in the smashing box office hit Zorro. She, in turn, fell in love with husband Michael Douglas when he found out they shared nearly the same birthday and told her he was going to be the father of her children.

He might be 25 years her senior (and that line might be a little too cheesy), but the truth is, they just work. The pair got married in 2000 and they’ve been together for over two decades, an impressive feat both inside and outside of the celebrity sphere. They’ve been through their fair share of rough patches (including Douglas’ throat cancer diagnosis and a very brief split it 2013), but the couple has managed to remain strong as partners.

These two made headlines when they started being spotted together on several occasions, looking cozier than just friends. Each made several appearances on the other’s Instagram, and while they never publicly confirmed or denied the relationship, they were doing more than enough to convince fans they were together.

RELATED: 10 Things We Know So Far About Justin Bieber And Hailey Baldwin’s Relationship

The whole thing seemed to fizzle out pretty quickly and didn’t last more than a month. Eventually, Sophia and Justin went on their separate ways, and not even the Instagram snaps remained. They each found love on their own terms, with Bieber now married to Hayley Baldwin, and Richie dating Kourtney Kardashian’s baby father, Scott Disick.

Elton John is a true musical icon and an inspiration for the gay community all around the world. His long-lasting relationship with former ad executive and filmmaker David Furnish, is simply inspirational, period. The two began dating in 1993, and they’ve been going strong ever since. That makes for 26 years together, with no signs of love dying down.

When it became legal in 2005 for them to enter a civil partnership, Elton wasted no time proposing to the love of his life. They then welcomed two sons together, in 2010 and 2013. When same-sex marriage was legalized in England and Wales in 2014, the two tied the knot in Windsor, on the 9th anniversary of their civil partnership.

Yet another one of Taylor Swift’s highly-publicized relationships, this little romance didn’t sit well with fans of the actor, and the two ended up calling it quits after only three months together. The two got together just a couple weeks after Taylor and Calvin Harris ended their own relationship.

The two were first linked together when a video showed them getting down and dirty on the dancefloor after the MET Gala in 2016. The following month, photos surfaced of the couple kissing, and a whirlwind romance began – but it didn’t last long. Reports on why the relationship ended are confusing, blaming either one or the other. Either way, for such a short-lived relationship, it sure made its fair share of headlines.

With 21 Academy Award nominations under her belt, Meryl Streep will always remain a force to be reckoned with and an inspiration for actors and actresses everywhere. Even though Streep is one of the most famous professionals in her field, she somehow managed to always keep a very simple and normal life outside of the spotlight.

The actress keeps her personal life very private, including her marriage to sculptor Don Gummer. The two tied the knot in 1978, which gives us a grand total of 41 years together! Yes, the two have been together for over four decades, and have four children together. Gummer has stood by Streep’s side ever since they became an item, and they’re sure to remain faithful to each other until the end. 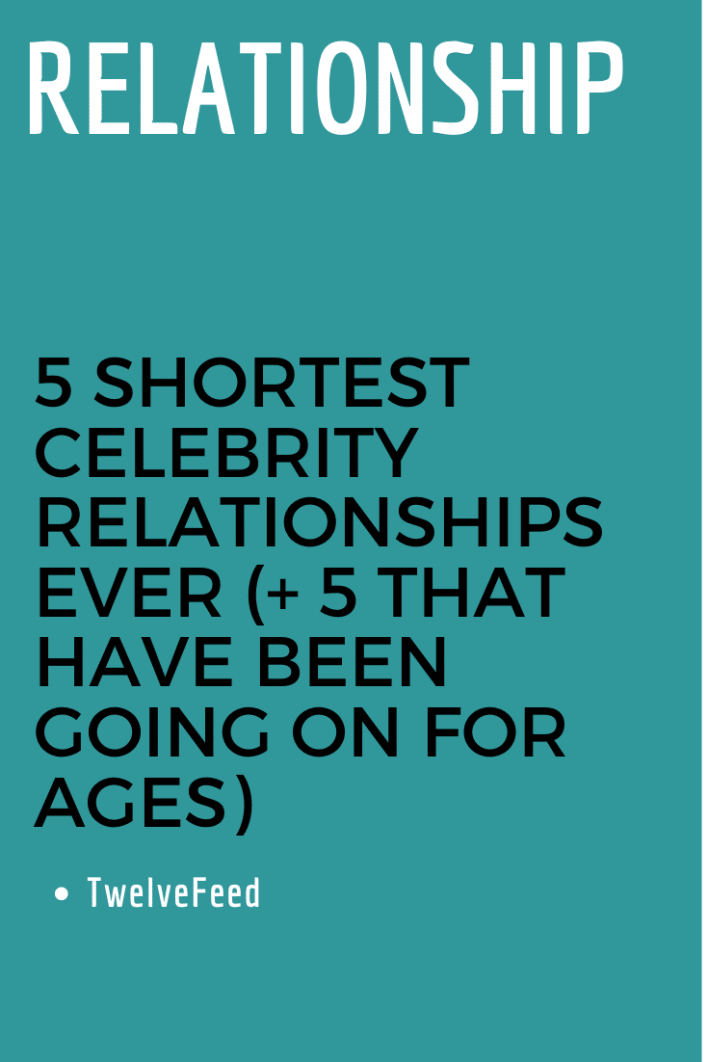 If Our Boyfriend Does These 20 Things, He's Looking For A Way Out