You’re having the perfect night planning for your Saturday activities when unexpectedly your friend (or sibling) suddenly asks you if you’re free that day.

You want to lie that you’re not, but then they don’t give you that time to react and just says that you tag along with their boyfriend or girlfriend and they won’t take an answer for a ‘no’.

So, you think of the ways to get out of it without hurting them.

But what if I tell you that you don’t have to worry about anything, because I’ve got your back. Here are 6 awesome ways to be the perfect third wheel:

You might already have an idea of who he/she is because of the conversations you had or had greeted him/her in certain occasions, but if you haven’t actually talked to the other person yet, you need to, ASAP. You have to work your way out of making sure your friend’s (or sibling’s) boyfriend/girlfriend will be comfortable enough having you.

2. Be their friend.
It’s only natural that you’re gonna be more comfortable talking to your friend (or sibling) than to the boy/girl he/she is dating but make sure that you don’t make the other person feel out of place and include him/her in every conversation. Create a good harmony and a healthy relationship with both of them. Not only does this makes you be a better friend but also be a thoughtful one to the other person.

3. Don’t make things awkward.
Instead of trying to look away when they are grabbing each other’s head and make out, you might as well get in the picture, literally, by taking a selfie while they are in the background. Don’t constantly remind them that you’re just a single loner tagging along with them. Have fun while you’re at it. Also, that’s what your main job really is, taking their pictures while they celebrate their love (even in the most awkward situation for you).

4. Know when to give them space.
Your friend (or sibling) won’t say it out loud to get out or take a walk, you have to realize this yourself. You need to see the subtle signs when they want to have an alone time together. You can try to head to the bar or roam around the city while you give them intimate moment, but don’t get too distracted and forget that you’re third-wheeling. You still have a job to do, they might want you to take a picture of them while they are doing a love shot.

5. Know your main purpose.
I have already said that your main job is being their photographer but that’s not all there is to be being the third wheel. Not only do you take their pictures ( even without them asking because that’s obvious they want you to) but also be their cover, caretaker and even sometimes bagger.

If they’re in a secret relationship, you’re the perfect cover for them. You have to make the best disguise that you three are just hanging out, doing friends’ stuff. Being the best caretaker on the other hand, means that you’re going to have to look out for them for the rest of the date. The bagger is the most difficult job of being a third wheel. It means that it’s your responsibility to hold the prized teddy bear they won at an arcade, their bags and even their popcorn (because their hands are too busy with each other).

6. Have fun.
Don’t mope around and wear a sad face just because you’re clearly single, instead enjoy going out on a date with them. Yes, you’re on a date (finally). Have fun conversing with them (but don’t try to talk to them too much and take away their alone time). Think of the free food you’re going to eat also and even the free ticket to that one costly movie you can’t watch because you’re too stingy.

Have fun hanging out with the couple and don’t be miserable about it. Don’t stress too much about it because you’re not a loser who can’t get a date but a good friend trying to live a double life (being single and in a third wheel relationship). 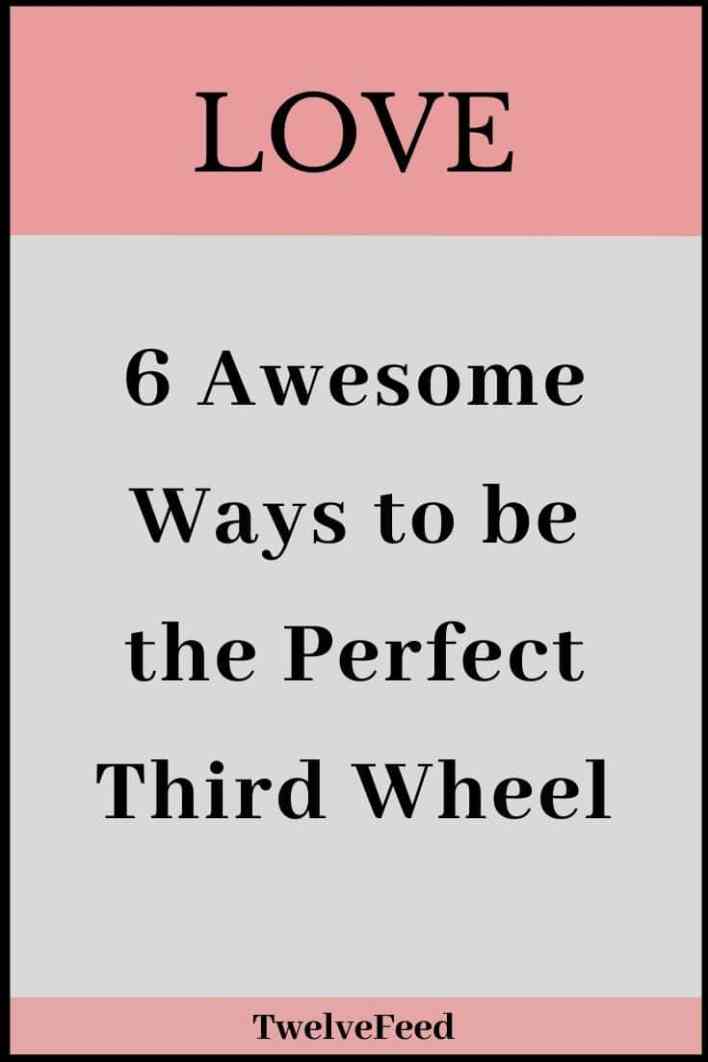 11 Inspiring Ways to be a Better Girlfriend

10 Surprising Benefits of being Single in College