The great, and sometimes horrible, thing about dating is that there are no rules. You can date a guy for three hours before you jump into a relationship. You can go through the courtship, meeting the parents, and a signed document of your intentions before being in a relationship. And you can also date him for a decade and still not be “official.” This is great for people who don’t want to be tied down by rules, but it’s a huge pain for those who are expecting a little more stability in the relationship.

The boon and bane of modern dating and “official relationships”

With Tinder just a click away, it is no problem to get a date these days. Plus we can always rely on our matchmaker friends to get us a date or two. Unfortunately, guys also know the ease with which they can date in the modern world. Just one little thing they don’t like about you can instantly get you from the “potential girlfriend” category to the “casual relationship only” category.

And this poses a huge problem for women who want something more than just a passing fling. We definitely want to know if we’ve been dumped into the “casual relationship only” category, but is it possible to really know for sure? [Read: 10 guys you should quit dating if you want real love]

Signs you won’t be his girlfriend

There’s no surefire way to know if you won’t be in a serious relationship with the guy you’re seeing. However, if you see any of these glaring signs, you can at least be pretty confident that he’ll never see you as anything more than just someone he happens to be dating.

#1 He is not consistent. Consistency is one of the top things you must look for in a guy. It doesn’t just make you feel at ease, but it gives you the feeling that they’re really interested in you. This doesn’t have to be limited to just texts and calls, but the plans they make just to be with you.

Do they want to see you regularly, or are there times when they disappear for a week at a time? If your guy is the latter, it could be possible that he has a girlfriend, other girls, or he could just be not that into you. Either way, no consistency means no potential for a serious relationship. [Read: Is he flirting like crazy one day, and going completely cold the next?]

#2 Meeting the parents and close friends is off-limits or has never been brought up. Let’s say you’ve been dating for a few months now, but you’ve never actually met his family and/or friends. It’s just always the two of you. Don’t you think that’s just a bit off, considering you should at least be at that stage where you’ve met his high school and college buddies?

Maybe the real reason why your guy never makes plans to introduce you to his family and friends is because he doesn’t have long-term plans to be with you. And don’t buy it if he says that his friends and/or family are just way too busy, and yet you always see Instagram photos of them casually hanging out.

#3 The guy you’re dating only remembers you when he wants to have sex. This is the most obvious red flag you have to watch out for. Unless you two have an understanding that your relationship is purely physical, then it is not acceptable that your guy only remembers to text or call when his body is in need of something.

#4 He doesn’t ask you questions about YOU. You’ve been going out for a few weeks now, but all he does is talk about himself, or if he does ask about you, he doesn’t ask any follow-up questions. It’s like he only asks for the sake of asking, and not because he wants to get to know the girl he’s dating.

One of the most obvious signs that a guy wants to be in a relationship with you is if he genuinely wants to know every little detail about you. If he can’t even bother asking about the littlest things about you, then it’s either he’s a narcissistic human being or a douche that has no plans whatsoever of being your boyfriend. Either way, it’s quite obvious that you’re better off without him. [Read: 15 surefire signs he likes being with you but isn’t into you]

Well, he’s obviously dating you just so he doesn’t stay single-single, and to feed his bodily and worldly needs. Stay away – no matter how hot he is, unless you two are on the same page. But girl, why date when you aren’t looking for a relationship? [Read: 13 clear giveaways to know if a guy’s a player or a gentleman]

#6 He veers away from the topic of commitment or labeling what you two have. MAJOR RED FLAG. We know how guys become possessive of girls they really, really like *or love*, so if the guy you’re dating refuses to be exclusive or to put a label on whatever it is you guys have, girl, it’s time to walk away.

This is one of those traps that so many women fall into. The guy refuses to outright say that he’s not looking for anything serious, so you sort of get that glimmer of hope that he might come around someday. The truth is, he’s keeping his intentions to himself because he still wants to have that hold on you.  [Read: 7 signs you’re definitely dating a player]

If a man wants to be with you, he will do everything to make that happen. Come to think of it, why invest so much time and energy on a man who doesn’t want you to be a part of his world for the long term?

If he just wants you now and can’t see you in his future, then there is just one way to deal with it – leave. I know it’s easier said than done, especially if you really like the guy, but you must learn not to sell yourself short.

The right man will come along, someone who will want you to be part of his world permanently. Just always remember to trust your gut when it tells you that you’re dating a frog instead of a prince. 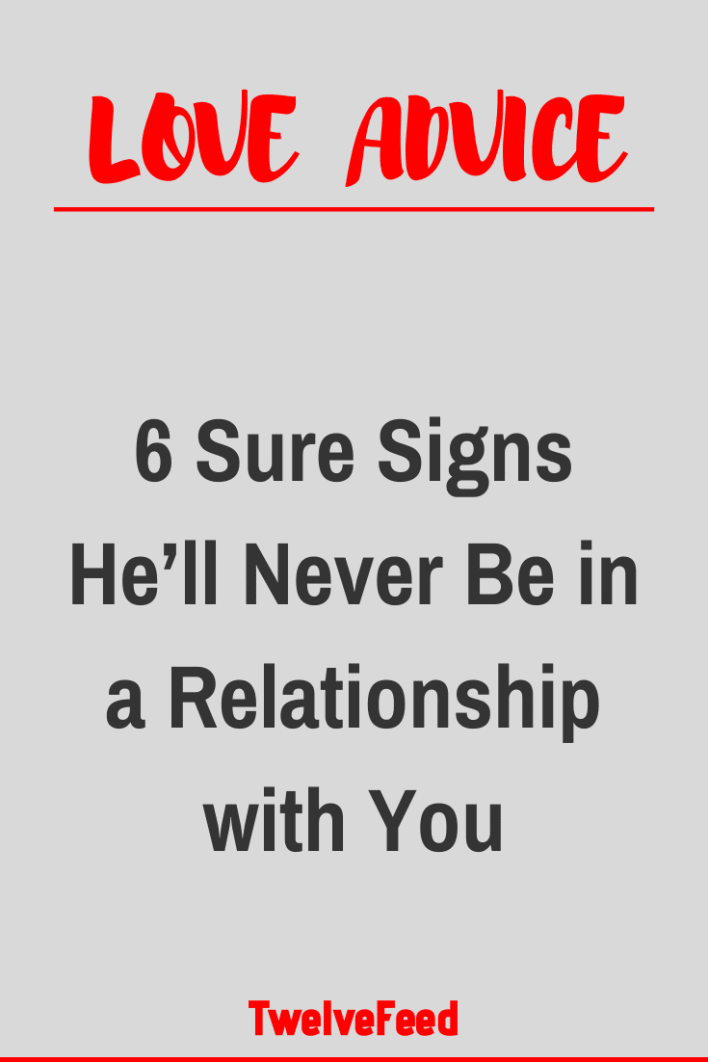 10 Questions You Need to Ask before Seeking a Divorce