Like most people who go through terrible breakups, I remember the 2018 brisk fall day like it was yesterday. Not only did it end my relationship with the person I thought I’d be spending the rest of my life with, it taught me a lot about myself and who I am in a relationship.

1. If your gut is telling you something is off, it probably is

You know how it goes. One night you’re on cloud nine professing your love via cheesy Instagram posts, and the next morning you’re texting him begging for one “good day” with no fighting.

In hindsight, I knew from the moment I had to give him my “two year” speech that it wouldn’t last. I knew without a shadow of a doubt that something was off the night he proposed on Miami Beach. At the time, I assumed this feeling stemmed from a gnarly sunburn or too much tequila, but trust me when I say my gut screamed from the rooftops that night.

My “two year” rule was simple. As a confident and strong woman, I expected a man to propose to me within two years of dating. In this case, he felt pressured. He didn’t want to lose me, but he didn’t want to keep me over a rule or a stipulation. Overall, he wasn’t ready, and sadly, when I look back, I wasn’t either.

Pro tip: Go for the partner that is consistent and makes your heart AND gut feel safe. Don’t settle for the up and down guy that makes you stress out more than work deadlines. Always having to second guess is exhausting, and you shouldn’t have to beg for one “good day” if you’re with the right person.

2. Your past and your upbringing is more important than you think

Imagine this scenario: A girl from an extremely conservative family who went through high school having never kissed a boy, had an 11 p.m. curfew, and didn’t know what weed was until an embarrassing age. A boy who lost his virginity at 13, had parents who condoned teen drinking, smoked weed with their kids, and gave them condoms before they could drive a car.

Now, the purpose of this is not to bash on any type of upbringing. Both he and I had wonderful, loving, and supportive families, but at the end of the day, we lived very different lives. Not only did these differences spark tons of issues around jealousy, trust, etc., they would someday dictate how we raised kids together.

3. Outsiders care about your relationship WAY less than you think

One of the hardest experiences of my life was the day I had to announce to my close family and friends that he had dumped me just months before our dream wedding. I was mortified, I was mad at myself, and I was nervous as to how people would react.

Looking back, I cared too much. My friends and family were amazing. They supported me, let me have my time to grovel, and weren’t pushy with my grieving process. Some of my social media acquaintances reached out and asked if something happened, not in a nosy way, but in a sweet way. For the most part overall, no one really noticed.

The world kept turning. The public shaming I expected didn’t happen, and two months after we broke up, I ran into his best friend, who was extremely kind and polite. My fear of his friends hating me and ousting me just didn’t happen, and I was always grateful for that.

Pro tip: Don’t feel pressured to appear a certain way to the world. Social media allows for people to show a side that they find most appealing, most confident, etc., but understand that it’s not always the case behind closed doors.

Full disclosure, my social media during that relationship was a lie. It wasn’t an accurate depiction of how I was feeling. But let me tell you, if people didn’t make a big deal that my seemingly perfect social media relationship ended, they won’t if yours does either. Tell who you feel needs to know and don’t worry about the rest. You don’t owe anyone anything.

This is easier said than done, I understand. I’m the youngest in my family, and both my older siblings found their wonderful spouses in their early 20s and have filled their lives with the most beautiful daughters.

From a young age (we’re talking 15ish), I started to feel the pressure to make choices about a career, to graduate college, to find a spouse, to have kids, to settle down, etc., not because my family members are terrible people, but because that’s what I saw from my two greatest role models.

So to combat this, I dated guy after guy, always looking for something serious. I specifically remember asking my first college boyfriend how many kids he wanted and where he’d want to live if we got married (after just a few weeks of dating). My 20s have consisted only of serious relationships until my fiancé dumped me.

As cliche as it sounds, the day he dumped me and took the ring back (still salty about that, TBH) completely changed my life.

The next few months, I learned more about who I was than I had in two decades. I went on dates just to get to know someone and not plan a future with them. I had fun. I joined Bumble, I traveled, I advanced in my career, I got two tattoos, I went on a seven-day cruise with my best friend, I tried new things, and I enjoyed life without giving myself too much pressure. And you know what? If he and I were married right now, I know I wouldn’t have done those things, and I’m so incredibly grateful.

Pro tip: Live your life. Make goals that don’t include a partner or long-term relationships. Make a list of things you’ve always wanted to try and try them. Go on dates with guys and redefine what you’re looking for. Focus on you, because in the words of the brilliant Demi Lovato, “Mine’s the only heart I’m gonna have for life.”

5. If you can help it, don’t face anything alone

Because I was always that girl who had boyfriend after boyfriend, I was never great about maintaining a boyfriend-friend balance. I would neglect a lot of my friendships and expected that to come to light when I went through the breakup. Boy, was I wrong.

Friends who I had ghosted (and had been less than great to) stepped up and helped me. They got me through it. From check-in texts to random visits and funny memes, just knowing I had a support system behind me helped more than I can ever express. In addition to my friends and family, I’ll never underestimate the power of therapy, whether you’ve just experienced a traumatic experience or not. Having someone to speak to, be open with, and cry with is unrivaled, and I can easily say it changed my life.

Pro tip: Especially with everything going on in these unprecedented times, be sure to reach out to your friends, whether you’re the one checking in or you’re the one that needs someone to talk to. People are busy and your friends are dealing with their own handful of stresses, but never underestimate how powerful a Facetime or girls’ night can be.

Last, but sure as hell not least, I decided to choose forgiveness. Of course, this went against my initial reaction, which included filing for legal action in getting repayment for the money my family had spent on the wedding.

But here’s the thing, getting even feels great temporarily; forgiveness feels great for life. I chose to forgive him, to respect him and our time together, and to look at the positives from what I learned and how he allowed me to transform and mature for the better. Keeping a glass half full attitude is hard when you want to steal their dog and burn their house down, but I’m glad I did it for me.

Pro tip: Make a list of everything good that came out of the relationship for you. Add reasons why you’re better off now that the relationship is over. (For example, he always said “seen” instead of “saw” and he had slept with the entirety of Southeast Michigan.)

After making this list, I may or may not have drunkenly texted him saying “thank you for dumping me.” But that’s a story for another time. 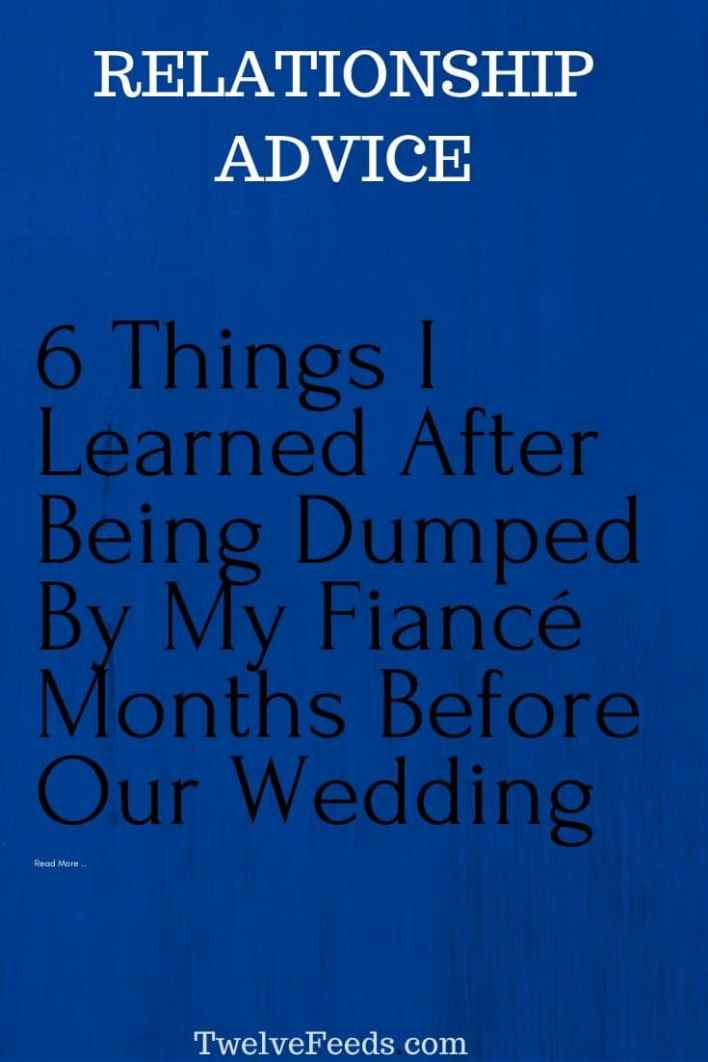 6 Things I Wish I Knew About Heartbreak