1. You can’t ignore the unacceptable things they do, simply because you want to be with them. You have to look at the whole package. If they’re sending cute texts and complimenting you and making you feel like the luckiest person in the world, that’s great. But if half the time, that isn’t the case, if they’re ignoring your messages and flirting with other people and making you feel like you’re worthless, you have to take that into consideration, too. You can’t focus on the good and ignore the bad. You have to be honest with yourself about how they’ve been treating you, not only on their good days, but on all of the days.

2. If they tell you they aren’t interested in a relationship, believe them. Don’t assume there is some secret meaning behind the words. And don’t take it as a challenge to get them to change their mind. Don’t pour all of your energy into convincing them you are worth the trouble. They’re doing you a favor by being honest with you about their intentions. The least you could do is believe them. Take their words at face value, even if you don’t want to believe them, even if it’s the last thing you want to hear.

3. The highs you get when they treat you right aren’t worth all the lows. You shouldn’t put up with months of mistreatment because you’re excited about the occasional week or two when things are going well with them. When you’re in the right relationship, your emotions won’t feel like they’re on a roller coaster. They’ll be stable. You’ll be happy and comfortable and relaxed the majority of the time. If you’re always flopping back and forth between being ecstatic and miserable, loving them and hating them, then they aren’t worth the trouble. Someone else can give you those same highs without so many lows.

4. Allowing someone else to determine your worth is draining. It’s not healthy to think highly of yourself on the days when you’re given attention and to think poorly of yourself on the days you’re being ignored. It’s not right to put your self-worth in the hands of someone else. You should determine your own worth. You should set your own standards. And you should never settle for someone who makes you wonder whether you’re valuable, because you are.

5. You didn’t do anything wrong. You shouldn’t blame yourself for falling for someone you didn’t end up officially dating. It happens. It’s not your fault for crushing on them and it’s not your fault they decided you wouldn’t work out together. Some people just don’t fit. It doesn’t mean you’re unlovable. It only means you’re meant to be loved by someone else.

6. You don’t have the power to control other people. You can do all the right things. You can be there for someone through it all. You can act like the perfect partner. But no matter well how you treat someone, they don’t owe you anything. You can’t control whether they want to be with you. You can’t force them to change their mind. You can only control your own actions. You can walk away when you aren’t being treated right. You don’t have to settle for getting strung along anymore. 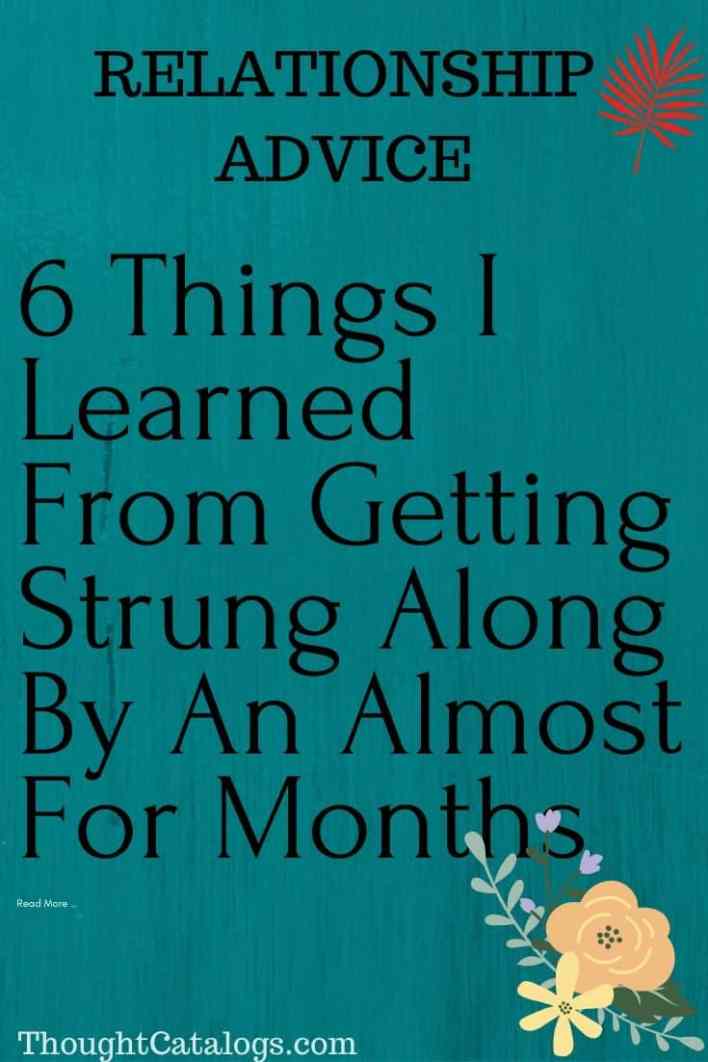