Gentlemen, it’s wonderful when you’re excited about a girl *or girls*. It’s also wonderful that you want them to know you really like them. But there are ways to go about doing so, and there are ways you will screw it up and scare them.

We all enjoy watching Lifetime movies and Dateline episodes, but it doesn’t mean we want to be in them! What I mean is that no girl wants to feel like they have a stalker, and although you guys might think you’re being romantic and sweet, you probably are coming across as scary and way too aggressive.

The only things we really want as far as being strong goes are your muscles and our coffee. But when it comes to the way you’re coming on to us, we’d appreciate a little more subtlety.

Moves that women find too aggressive

Don’t worry, it’s not too late to change the way you approach the woman of your dreams. Here are a couple of things you might be doing to drive her away with your strong aura.

#1 Calling too much. No one wants a helicopter parent, especially when the person being the helicopter isn’t their parent at all, but the guy that they like. Or are starting to like. If you want to turn away the girl you like really quickly, one way to do that is by calling her all the time.

It’s great that you want to let her know you are thinking about her, but calling here every hour during the day and leaving cheesy voicemails are not the way to win her over. I promise.

#2 Texting too much. Just like you can call too much, you can also text too much. Not everyone wants to text all day, everyday. You need to let your relationship build and grow, like a fern. You can’t bombard your crush every minute of the day, texting her and asking stupid questions.

Besides, if she has a day job that requires her to focus, she probably won’t be able to reply. And if she isn’t replying at all to any of the 100 texts you have been sending, take a hint. And a chill pill.

We want to be the ones that feel really pretty and sexy, we don’t want to feel like the one who’s constantly trying to come up with polite compliments to give you. Stop sending so many selfies of yourself during the day. It’s kind of weird.

#4 Over-compliment. As women, we love to be told how beautiful we are, and how sexy you think we are. But if you start telling the girl you like how gorgeous she is every single minute or hour of the day, you’ll end up sounding like a broken record, and more importantly, it’s going to sound like you’re just saying these things because you think it’s what she wants to hear… Which she does, just not all the time.

#5 Wanting to hang out all the time. As I’ve mentioned above, relationships are like a fern. You have to water it slowly, give it room to breathe and so forth, to let it grow into the beautiful plant that it is. When you start liking a girl, it’s great that you two want to hang out all the time, but you also want to make sure you don’t suffocate her and that you give each other space.

Don’t try to make up for lost time during the day because you two have jobs, but instead, plan to hang out. Just don’t hang out all the time, or don’t make her think you’re obsessed with her in the creepy kind of way by trying to fill up her schedule with your dates. It’s not a turn on.

#6 Talking about marriage. Sure, many girls probably have fantasized about getting married. But that doesn’t mean they want to, especially if they just started dating you. We all hear those stories about two people falling madly in love immediately and running off to Las Vegas to elope. But we also know what happened when Britney Spears did that.

Point being, don’t tell the girl you like that you want to marry her within a few weeks of knowing her unless she’s crazy like you, as that will only scare her away even more. You can think it, just don’t say it too soon.

#7 Showing up unexpectedly. This one should also be called stalking. If you start showing up at her office or apartment or friend’s house because that is where she told you she was going to be, that’s not cool.

It might be romantic once in a blue moon to surprise her at work with lunch, but make sure you don’t confuse sweet surprises with unexpectedly annoying surprises. Surprising her by literally showing up when she has already made plans will only end up making her think you’re a stalker with a track record. There is a fine line between being romantic and sweet, and being a psycho stalker. [Read: How to think like a woman and get the girl easily]

If you’ve ever had your friend tell you about how much they like *and sometimes even love* a girl or guy within days or weeks of meeting them, think back to what your initial thought was when they told you that. You probably thought they sounded insane, and told them to chill out.

You don’t want to be the guy that is known as the crazy one when she’s talking to her friends about you. You also don’t want to be the one that she goes “ugh” about when she sees a missed call and text message from you, either. Newsflash: “UGH!” is definitely not a code word for sexy, attractive, and relationship material.

Don’t mess up the possibility of having a great relationship by butchering it to death with your aggressive approach. Rome wasn’t built in a day. And neither should your relationship be. If you try to force her to love you by being too “in your face,” your budding romance is sure to crumble. 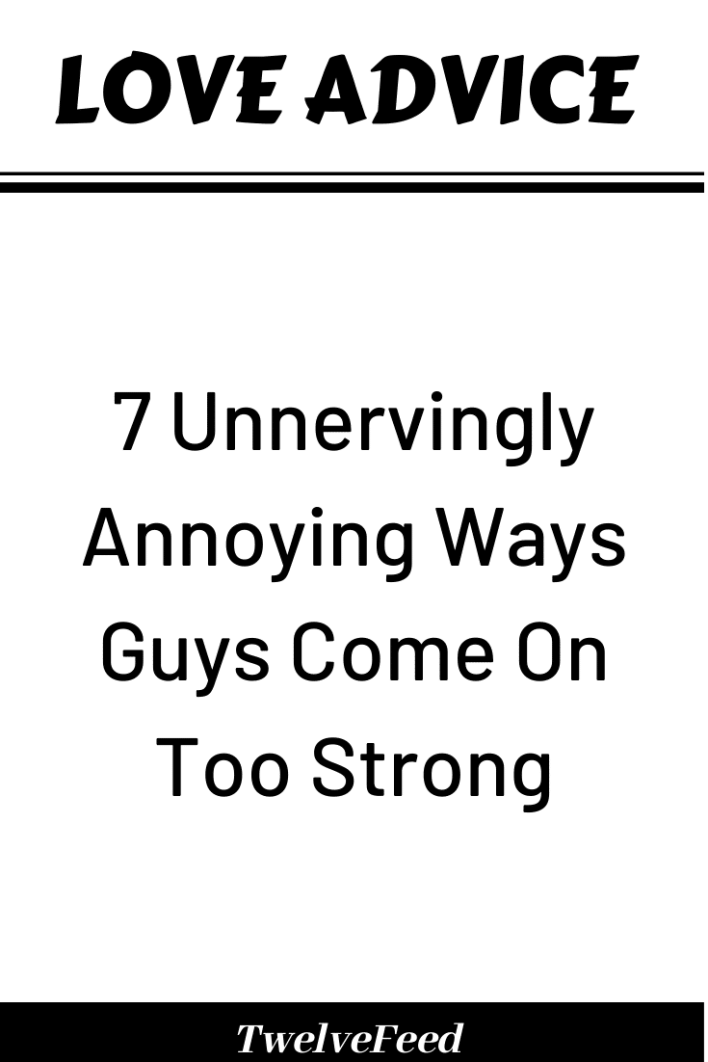 How You Handle Stress According To Your Zodiac Sign

How to Decode Cryptic Texts from the Guy You Like