When you’re starting a new relationship, it’s pretty normal to see everything about the other person with rose-colored glasses. During the first stages of a relationship, you likely feel excited and giddy. In this honeymoon phase, everything feels wonderful and the future is exciting and something to look forward to.

While this can be a great feeling, it can also mean it’s easy to ignore possible issues and warning signs. These twitterpated emotions make it hard to see red flags even when they should be obvious or other people are pointing them out to you. Being aware of common red flags that people often ignore in new relationships can help you keep your eyes open and make sure you’re investing in someone who is good for you.

Here are eight common red flags that many people ginger at the start of a relationship.

RELATED:20 Texts From Guys That Are Major Red Flags

8THEY TALK BADLY ABOUT ALL OF THEIR EXES

One big red flag is to listen to how your new significant other talks about their exes. There are some exes that probably were bad, especially if they were previously in abusive relationships. However, if the person you’re dating only has bad things to say about all of their exes, and their reasonings for hating them are shallow or not very grounded, this could be a huge red flag.

You want to be dating someone who is self-aware and who takes responsibility for their own flaws. If they are blaming their exes for all of their problems, this could mean they won’t take responsibility for when they mess up in your relationship.

7THEY WANT YOU TO TEXT AND TALK WITH THEM NEARLY CONSTANTLY

During a new relationship, it’s often normal to be talking a lot. You’re likely are texting and talking over the phone often as you get to know each other. While it’s normal to want to know everything about your new significant other, keep an eye out if they want to stay in touch excessively. If the person you’re dating gets frustrated with you when you can’t respond right away or when you’re busy doing something else, this is a red flag. This could definitely indicate that they are controlling and that they will expect all of your time and attention. It’s healthy to have other things and people in your life besides the person you’re dating, and they should respect that.

6THE WAY THEY TALK TO YOU IS CRITICAL OR NEGATIVE

When you’re dating someone at first, usually you’re both on your best behavior. With time, negative traits can come more to the forefront, but if someone is showing a mean side right away, this is a really bad sign.

RELATED: 20 Signs We’re Not Secure In Our Relationship

If they criticize everything you do or consistently have negative things to say, it’s time to turn around and run. You don’t want to be dating someone who makes you feel insecure or who thinks bad about you. This could also be an indication of someone who is controlling or even abusive. Emotional abuse is a serious problem, and this is an early sign of that.

Your friends and family don’t always know best and sometimes they could get the wrong idea about a person. But, in general, it’s a good idea to listen to the overall feelings other people in your life have about the person you’re dating.

If basically none of your family or friends like the new person in your life, maybe they aren’t great for you. In general, your family and friends want what’s best for you. And, since they aren’t in love and a little blinded by that, they might notice red flags and issues that you can’t see yourself.

4THEY DON’T TREAT OTHER PEOPLE AROUND THEM VERY WELL

Some people who have abusive personalities are really good at hiding that when they are trying to charm someone. Seeing how the person you’re dating treats other people is a good indication of their character. Notice how they treat their family and friends, and also pay attention to how they treat people like waiters and waitresses. If they treat people in retail badly, this could mean they think they are better than other people and don’t have a good heart. This is a sign you should dump them. Plus, even if they are nice to you, why would you want to be with someone who treats others badly?

3THEIR BEHAVIOR IS OBSESSIVE/THEY MOVE TO FAST

It can be difficult at the beginning of a relationship to notice the difference between those honeymoon phase feelings and someone who is obsessive in a bad way. When someone wants to move super fast, it could mean they have something to hide or are insecure about what they want.

RELATED: 10 Sure Ways To Improve Your Relationship Quickly

Also, obsessive behavior could lead to big problems down the line. If they are too intense about their feelings right away, this doesn’t necessarily mean it’s true love.

2THEY DON’T RESPECT YOUR BOUNDARIES

Boundaries are important. All relationships and all people have different boundaries, and it’s’ always important to respect them. If they continually disrespect or push against your boundaries, they likely aren’t a very safe person to be with.

Boundaries can be physical as well as emotional, and it’s essential to respect all kinds of boundaries. If you’re dating someone who tries to ignore or push when you say no, they don’t respect you and it’s time to leave.

1THEY ARE SHOWING CONTROLLING BEHAVIORS 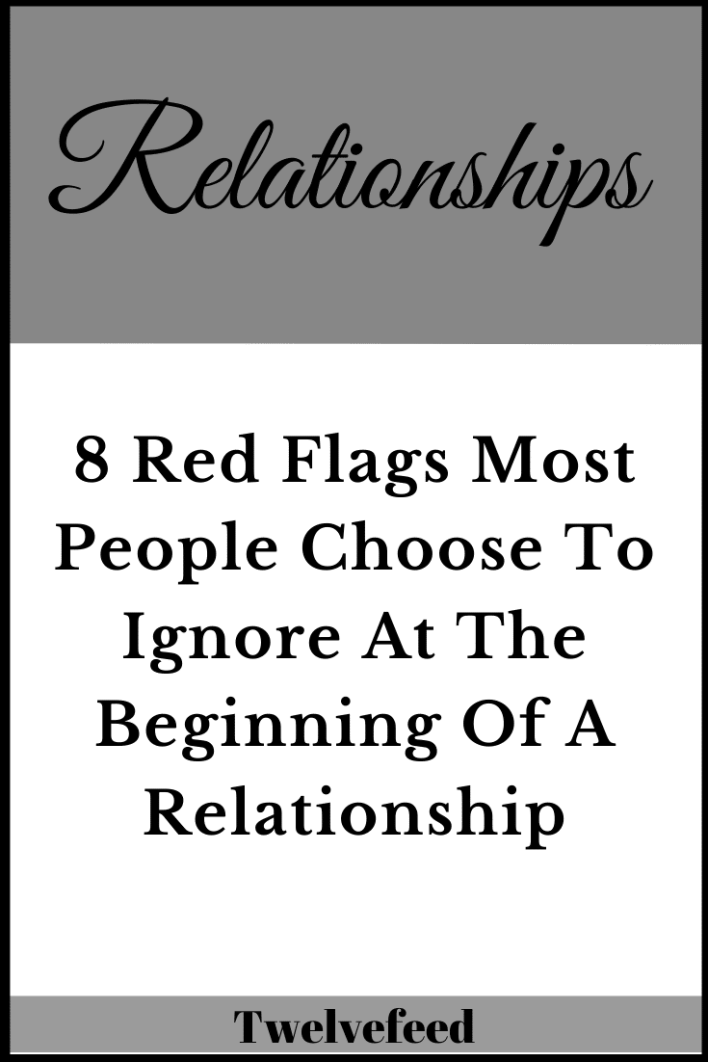 Celeb Couples Who Have Completely Become Relationship Goals To All