How many times does someone tell their partner of five years that they want to split up… and their partner truly had zero clue that a breakup was on the horizon? Breakups range from mutual and amicable to absolutely devastating, and even when two people get that they don’t belong together it can still be tough to make this massive change. It’s also hard for family and friends of the couple to get used to it.

Someone who is an ISTJ is a “Responsible Realist” and is “dependable” and loves to follow rules and order. When they want out of a relationship, they’re going to make lists of goals and plans.

ISTJs are “careful” and “logical” and people who are used to “managing details.” When they’re thinking about a breakup, they’ll seem to have this new energy and so many ideas for what they want to accomplish. It seems like they would want to create order in their life since once they are ready to tell their partner that the relationship is over, things will get a little bit messy.

7ENTJ: They Think Of An Ultimatum About A Relationship Milestone

Someone who is an ENTJ is a “Decisive Strategist” and since they’re about “long-term goals”, that would factor into how they act before breaking up with their partner. The official description says, “People with ENTJ preferences usually see the big picture and think strategically about the future” so this is how they would approach a breakup, too.

6ISFP: They’re Doing Too Much For Their Partner (And Losing Themselves In The Process)

“Versatile Supporter” is the description for ISFPs, and these are people who “enjoy providing practical help or service to others.”

When an ISFP wants out of a relationship, they’re going to basically do so much for their partner and put so much effort into the relationship that they totally lose themselves in the process. A lot of people do this and while they mean well, it doesn’t work out because it’s so key to look after yourself. An ISFP is a big helper and it sounds like someone with those tendencies might think that if they put more time and effort into the relationship, then things will be better then they are. Of course, it doesn’t work that way, and it’s probably true that the relationship is heading for the end.

When an ENTP or “Enterprising Explorer” wants out of a relationship, they’re going to start getting really, really social.

One of the personality traits of an ENTP is that they don’t like “isolation.” They also don’t like “focusing on personal problems.” Since those two things are true, then an ENTP would show that they want out of their relationship by going out with friends a lot and making sure that they’re staying social, busy, and out of their apartment a lot. ENTPS are also “independent” and it seems like they would become even more so while figuring out if they want to break up with their partner.

4INTP: They’re Having Deep Talks With Their Partner

An INTP or “Objective Analyst” wants out of a relationship when they keep having serious talks with their partner about how the relationship is doing. Are they feeling as much joy as they did during their first few dates and the first year that they were together? Or have things gone in the totally opposite direction and neither one is happy?

The fact that they’re having so many deep talks with their partner shows that they want to break up. Their partner will probably be able to tell since they’ll be talking about the relationship in such a serious manner. Since they’re an “analyst” they won’t be able to stop themselves from wanting to talk about the relationship before saying that they think the best thing is to break up.

3ESFJ: They’ll Be Extra Sweet And Make Sure Their Partner Is Okay Before Deciding To Break Up

An ESTJ is a “Supportive Contributor” who will be extra sweet toward their partner in order to make sure that they will be okay after they officially break up. It definitely seems like this is how they would approach a breakup because this is the official description about them: “People with preferences for ESFJ tend to be sociable and outgoing, understanding what others need and expressing appreciation for their contributions. They collect the necessary facts to help them make a decision and enjoy defining helpful procedures.”

ESFJs are “responsible” and “loyal” so they won’t take a breakup lightly. They will be super caring and sweet.

2ESTP: They’re Telling Everyone They Know About The Relationship Problem (And Asking For Advice)

It’s clear that ESTPs want out of a relationship when they start telling everyone that they know, from friends to coworkers to relatives, that there are some problems in their relationship. They’re saying this in order to ask for advice and because they really can’t help acting this way.

This is because someone who is an ESTP is called an “Energetic Problem Solver” so they’re going to see their troubled relationship as a problem that they can hopefully figure out and solve. Of course, it’s not that easy and they will probably realize that a breakup is the best thing to do but they will talk a lot about it beforehand.

1INFP: They’ll Try To Find The Love Again Before Making Their Choice

An INFP is a “Thoughtful Idealist” who “enjoy devising creative solutions to problems.” Of the “things that stress” them out, “decisions” is one of them.

Based on that, it seems like INTPs might have a hard time actually breaking up with their partner when they know that they’re ready to do so. When they want out of a relationship, they’re going to try to find the love again before making their choice. That could mean signing up for a relationship therapist, instituting more date nights, and/or chatting more about feelings and future plans and goals.

Since they’re an “idealist” they really hope that things will be good and they won’t have to actually break up with their partner. 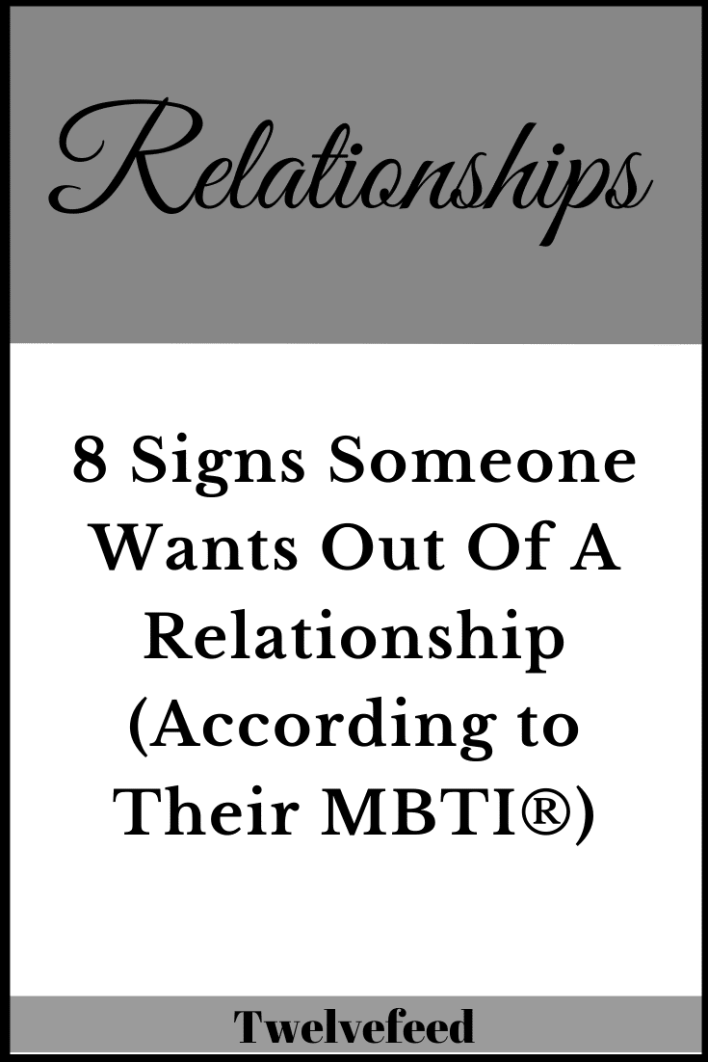 If He’s Doing Any Of These 25 Things, He’s Toxic