You broke up, you accepted that, you’re trying to move on—or so you say. But are your words saying one thing and your actions saying another? If so, don’t worry; you’re certainly not alone.

I think we’re all guilty of holding on to an ex for too long. Maybe it’s because you refuse to believe it, or maybe it’s just because you still think you should be together. Either way, it’s no good for either of you. When something ends, it should stay ended—for both of your sakes.

Most people may not even realize that this is their reality, insisting instead that they are “just friends” with their ex. While I fully believe people who break up can be just friends, there is a line between friendship and still dating, and finding where you are in relation to that line can be confusing. [Read: How to be friends with your ex without any complications]

I think I’m in this situation right now, actually. We decided to end things and yet absolutely nothing has changed. Even though we weren’t very serious and things didn’t go too far in the relationship, we still act like we did before and as if nothing has changed. I just can’t let him go.

For those of you who have recently had a relationship end and are curious if this is you, we’ve put together a list of signs that can tell you if you’re still dating your ex. Some of these signs may be obvious but overlooked, but others can be a little more difficult to see.

#1 You skipped the stage of being upset. For whatever reason, when you two broke up, there were a few tears, but nothing overwhelming. In fact, you went straight back to your happy self the next day. It may be that you took the “we can still be friends” lines wholeheartedly, and that settled your emotions a little.

Odds are, if you skipped the stage of being upset, it’s because you simply are in denial of the breakup. You’re holding on to the hope that you can be friends and by thinking that, you’re thinking that you two will just get back together. [Read: Do you still love your ex? You’re not alone]

#2 You still talk every day. How can you let go and move on if you’re still talking to that person every day? Do your conversations still consist of the same material? Then you’re probably still dating them. In order for you to move on, conversational contact needs to cease immediately.

#3 You still see them all the time. Umm, hello? If you guys are truly broken up, then there shouldn’t be any hanging out—at least not for the first couple of months. If you two are still engaging in all the same activities—and yes, I mean between the sheets—or even just going out on “dates,” then you are still dating. There is no argument against it; you’re still dating them and you just can’t let go. [Read: 10 signs you’re clearly still attached to your ex]

There’s a reason people who break up cut off all communication. It’s because they need time to let go and move on—something you can’t do if you’re still going on regular dates with your ex.

#4 You talk about future activities with them. Making plans and talking about the future are things that couples do. Even if you say you’re “broken up,” that’s certainly not the case if you’re planning dates, events, and even still talking about the future as if they’ll still be there. Couples who decide to call it quits first of all don’t talk *usually* and they certainly do not talk about having a future where they are regularly in each other’s lives. This is you holding on to false hope and it needs to end.

#5 You get outwardly angry if they make plans with another person. You’re broken up! You shouldn’t care if they’re going out on a date with someone else. Sure, you can still care, but you can’t get angry at them—unless you still feel like you’re dating your ex and can’t let go. Getting jealous and angry is not something you should do if you are truly broken up. [Read: 8 surefire ways to deal with your ex dating someone new]

#6 You still talk to their parents frequently. *Sigh*. Just don’t do this. Don’t keep frequent conversation up with their parents or any other family member for that matter. You can’t continue a close relationship with your ex’s parents if you’re broken up. It will inhibit your ability to let them go and honestly, it will seem as though you’re still with your ex—especially if your conversations are basically the same as they were before! And if their parents can’t even tell that you’re broken up, then you’re definitely guilty of still dating your ex.

Usually, when a couple breaks up, they tell their friends and family so people don’t go around asking about them. If people ask you about your ex and you talk as if you guys are perfectly fine and nothing is wrong, then you’re probably still dating them in your head.

Otherwise, all of the close people in your life would know. If you’re simply not telling them about the breakup or even lying about it in general, you need to move on because you just can’t let go of them. It’s over. Accept it and tell everyone the truth. Don’t hold on to this false hope of the two of you working things out. [Read: Is your ex still thinking of you? Signs to know for sure]

#8 In your mind, they’re still the one for you. When you think about the future, you still see them by your side. That’s how you know you’re still dating them and you can’t let them go. Despite everything you’re saying, you really still think they’re going to be the one that’s there until the end.

In your mind, you’re still with them and they are the one for you. That is the biggest sign that you’re still technically dating them and you just can’t let go. If you’re still planning your future around the idea that they will be there, then you’re just stuck on them. [Read: 16 signs your ex misses you and wants you back in their life]

The fact that you may still be dating an ex and not even know about it may alarm you a bit. But by using the signs above as a guideline, you’ll be able to tell if you’re one of the many who is still dating your ex and can’t let go. 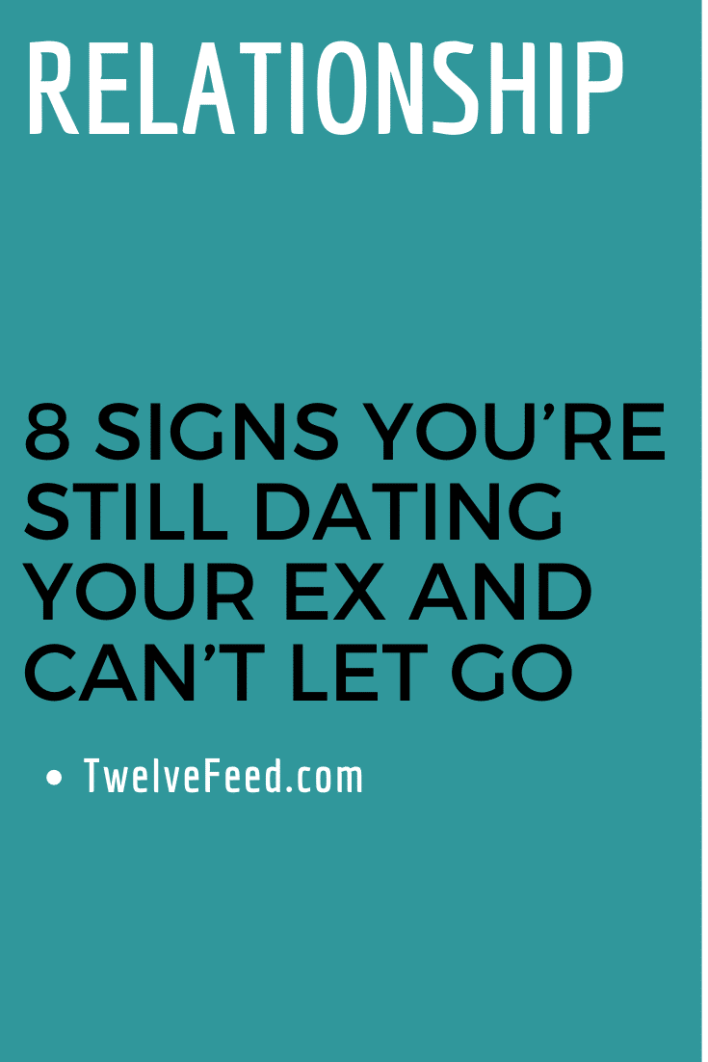 Relationship Fights – 6 Things You Should Never Ever Say

A Helpful Reflection: What Am I Doing With My Life?