Girls might be unpredictable sometimes but when it comes to making decisions, they will ponder on problems over and over again. She will choose to patch things up than break them, she will choose to forgive than stay angry and she will want to choose to understand even if you make her feel neglected.

But women have their limits too and their pride (she has thrown it away again and again but you just made her pick it up again). She will not stay still to receive the knives you throw at her. She will either fight back or leave.

A woman is like a volcano who is silent and calm for years but she will not erupt out of anywhere, there will be signs and warnings and you need to do something before it happens. Here are 9 reasons why girls break up with their boyfriends.

1. You fight too often.
The house no longer feels like a home but a supreme court. The shouting, the bickering, they are deafening. The arguments, the jealousies, they are so dangerous they turn love into hate. The words they throw at each other turn into knives, the after-fight drop of tears turns into a river and the warm summer air turns into cold air blowing.

These fights are so heavy and tiring to carry around that she wants to drop it already because men no longer want to share the burden and fix it together (maybe you never even did in the first place). She has gotten tired of fixing what you have broken, doing the things you have failed to finish, and the promises you have broken. It’s so exhausting she just wants to write him off her story and start a new chapter in her life without him.

2. He’s moody.
Nothing’s more annoying than a man you can’t figure out. A little mystery is what women need from time to time but a completely foggy image around him can give us serious headaches. Mysteries and surprises are when your relationship is quite on the edge, not the sudden mood swings that can throw women off their seats. Both girls and guys hate this kind of people so it’s just natural to let go of those who don’t know how to take care of themselves.

3. He doesn’t have time for her anymore (priorities have changed).
Girls know the exact day her boyfriend change her spot to the bottom of his priorities. It could be the day he canceled the date for “more” important schedules, or the forgotten anniversary, or even the time he might be physically there but his mind was too busy wandering off in another universe she couldn’t travel to. She feels like he no longer has her in his plans for the future so rather than staying in fear at the present, she’d rather go back to the past where he doesn’t exist.

4. He doesn’t take an interest in her life/conversations.
It could’ve been the time he didn’t ask when she was telling a story or the time he didn’t go to her dance performance when it all started. She feels like she’s not interesting anymore, not a bit funny, and worse, boring. He might not have even complimented her on several occasions. Communicating with each other is as important as taking notice on little things about her, and he failed to do this. The moment he stopped asking about her was the moment he stopped caring, that’s how it is for the girls.

5. He lets her decide on everything.
When you’re dancing in pairs, you have to be in sync but what if the woman is the one dragging the man around the ballroom hall? That’s no longer romantic to look at. He has failed to tell her about the list of things he hates and loves (which is important to the woman) and asks about her opinion too. He has put the burden on every important decision in the relationship and she got tired over time of doing it all on her own. Well, who wouldn’t get tired after walking around on one foot only, right?

6. She feels alone.
A girl will feel alone if her man makes her feel like she doesn’t matter anymore. When she doesn’t make him feel excited and in love anymore can break a woman’s heart and fall into a deep abyss. If she feels that the room is a bit bigger now than before and there is a wall between them, it might be time for her to leave the room. Men often fall into their comfort zone after getting into a relationship but women always want to try to do something new and fall in love with each other every day but if their man is too lazy to do these things with her, it will suffocate them over time and leave.

7. His friends are more important than her.
It’s okay to hang out with his friends once in a while, girls also do this but to be with them all the time leaving no time or place for her has affected the relationship. It makes women think that he can be happy even without her and that it made her feel less insignificant than his friends.

8. She feels worthless (she’s not being acknowledged).
The saying, “Action speaks louder than words” doesn’t always apply to every stage of the relationship. A woman leaves a man if he has failed to make her feel like a woman, if she felt unappreciated, neglected, and worse, unloved. Women like to talk, this is what they do to feel connected with the other person and they need to see he is listening to know he supports her, but if she can sense she is being taken for granted, she will not hesitate to leave him.

9. She likes someone else. Yikes.
It might not be infidelity or cheating but it is on its way there. Sometimes, people let go because it’s easier than to hold on and it might be true in this case. Being in a relationship with someone while being in love with someone else is a cruel thing to do to oneself and to another person.

“How strange it is that all we have been through together, we have become strangers again” – Unknown

A boyfriend-girlfriend relationship can be one of the sweetest things that can happen in our lives. But in order to keep it and fully enjoy it, we have to work harder to be truly responsible, honest, caring, and loving with our partners. 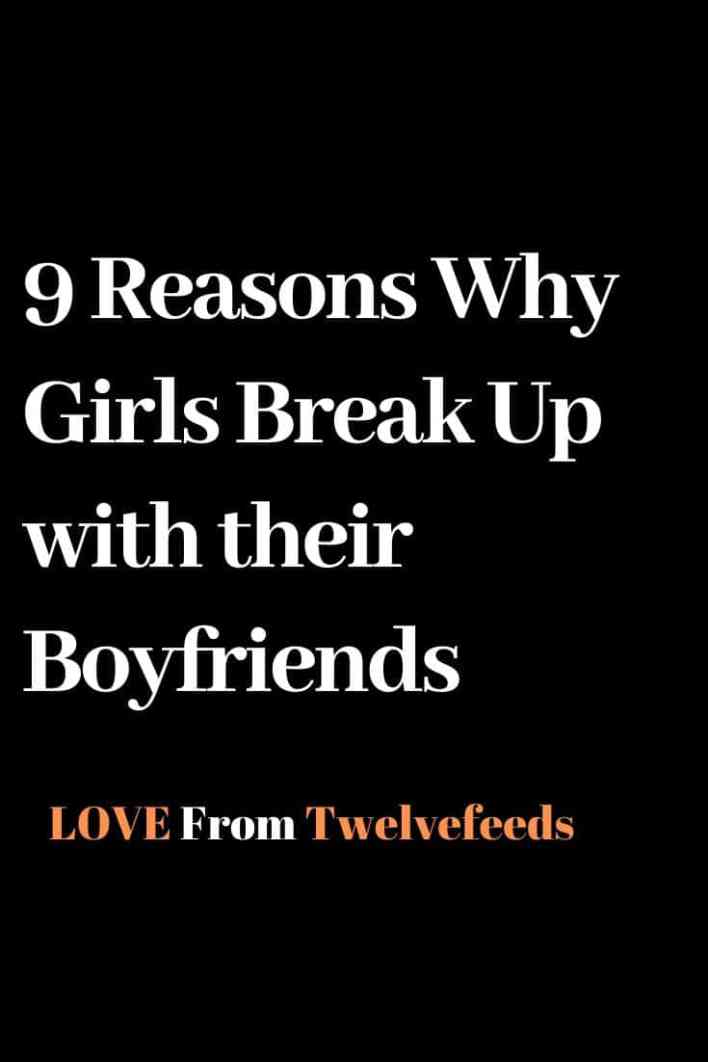 14 Signs Your Ex Still Loves You and Wants You Back

10 Inspiring Ways to be a Better Big Sister