Imagine finding the person meant for you but eventually losing them because you were unaware of how much you’ve been hurting them. Sometimes, even the sincerest of apologies won’t bring them back because it’s already too late – too late to fix what’s broken just because you were either too naïve or oblivious of the fact that you, the very person who promised to take care of their heart is the one breaking it.

If your love story is starting to fall to this tragic ending, you should do your part and be more observant and sensitive to the needs of your significant other and find out how your relationship is actually contributing to either their growth or their heartbreak.

So what’s your first move? Simply notice. Here are some signs you broke your partner’s heart and what to do about it.

1. They started spending less time with you.
Sometimes, other people cope with a broken heart by staying away from the person that caused it. You’ll know if you broke your partner’s heart because they will always find a reason to be with their friends or their family just to feel less hurt.

Probably it’s time you talked to them and know what’s really going on? Good communication can fix even the most complicated issues in a relationship.

2. They’re unusually quiet.
If you’re with someone who is usually loud and cheerful and they suddenly become this quiet and timid person, then something must have caused this dramatic change of behavior. Most people aren’t that expressive when they get hurt and would often resort to what they know is safest – silence.

Try to look back and think about what might have gone wrong. Do you think you said or did something insensitive? If they are still not ready to talk, respect their silence and wait for the right timing.

3. They no longer laugh at your jokes.
The way people respond to someone’s sense of humor says a lot about how they see the other person. In fact, people who laugh at even your lousiest quips are actually the ones who like you not just as a person but a potential partner – but what if you’re in a totally opposite situation with your now significant other?

Figuring out what went wrong and what you can do about it should be your first move. What’s best to do is to try and arrange a proper conversation and just let it all out.

4. Their eyes say it all.
The eyes being the windows to the soul can tell us a lot about a person’s state of mind and what they are feeling at the moment. Maybe your SO is giving you some sort of a signal or sending you a message that they’re hurt or heartbroken but just too afraid to tell you in words?

Some people don’t want to express their emotions because of the fear that it might lead to a breakup. Let your partner know that it’s okay to cry and it’s okay to express how they feel. Show them that you’re there to listen and to understand whatever it is that is bothering them.

5. They suddenly become distant and act detached.
If they seem to act distant and detached, you’d notice usual patterns from not even bothering to acknowledge your presence to just acting as if nothing is wrong until they finally stopped caring anymore.

If you notice these signs in your partner’s behavior, it’s actually best to give them time to find the interest to talk to you about what’s bothering them. However, if you know some ways to make them speak up without hindering them from taking refuge in their silence, then go for it. What’s important is you show them that you care and that their feelings matter to you.

6. You get cold responses.
How about getting the cold one-word text messages or even getting “seen-zoned” when you try to start a conversation? Or even when you’re together and all you get are nods and the standard Yes and No?  Even if you’re not the sensitive type, it’s impossible not to notice these signs.

If you know what you did to deserve their cold and indifferent responses, learn to apologize. If you don’t have any idea about what really happened, it won’t hurt to ask and if you’re really at fault, take anything they throw at you with a loving and an apologetic heart.

7. They stopped expressing how they feel.
During the honeymoon stage of every relationship, partners feel safe and confident to be themselves and to tell their significant other their life story: their experiences, what makes them happy, what grinds their gears, etc. However, there are times when they suddenly stop being open and would eventually clam up just because at some point in their relationship, they have felt hurt or insecure because of what their SO either did or did not do.

If you notice these signs, do something that would show them how important their thoughts are. Tell them that their feelings matter and you appreciate that openness and how they show their true self without the mask and the walls. Let them trust you again.

8. They’ve become overly emotional.
Most people who have been hurt by the love of their life sometimes don’t have the courage to express how they feel, thinking that it could stir a problem in the relationship. Instead, their feelings will manifest in the slightest triggers and in the most trivial reasons and it will just be a matter of time until they explode.

Don’t leave them feeling sad and alone while trying to hide the pain that you have caused. It’s important to acknowledge how they feel and why they felt that way.

9. They stopped talking to you altogether.
Perhaps the last and the final warning that your relationship is in for a fall is when the communication stops.

Do your part and show your willingness to make it work one more time. It’s not yet too late.

Keeping a good relationship takes more than love and commitment. One should also have the courage to face the bad parts, to be with your significant other in the darkest times – and to be thoughtful enough when it matters the most.

No love story is perfect but you have the ability to make something beautiful as long as you have a genuine appreciation and respect for each other’s feelings. 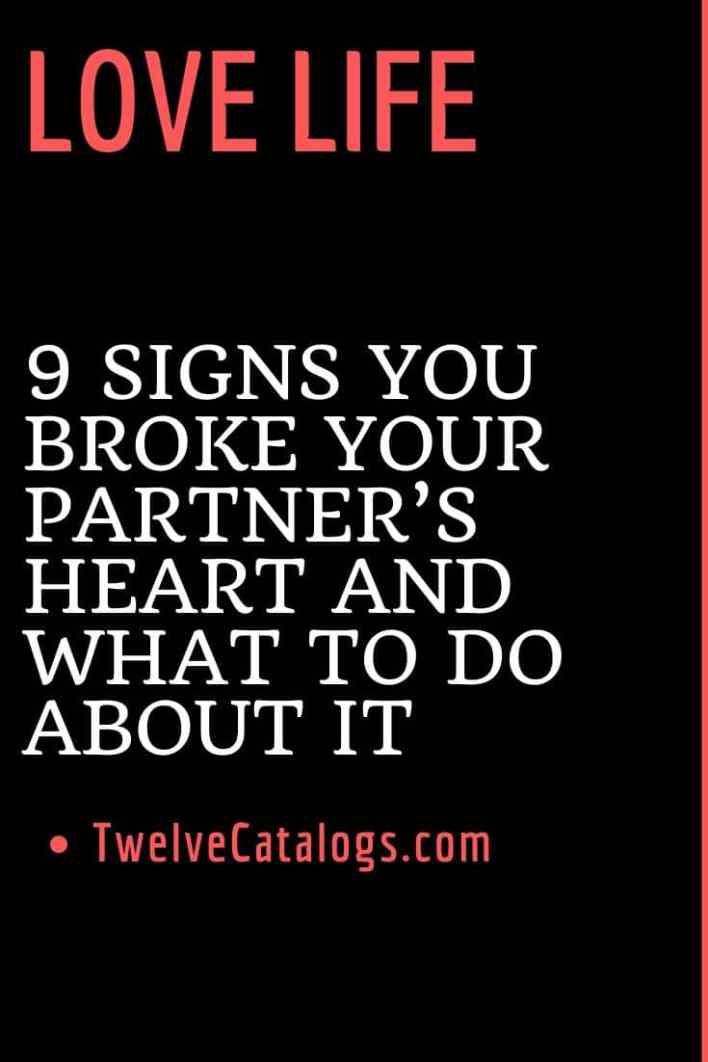 11 Ways to Overcome Insecurities in a Relationship