Dating is definitely not like it used to be. Guys don’t really have to put forth any effort into meeting a girl. Thanks to computers, they can immediately show their intentions with a click, a tap, a “like,” a “poke” or an instant message. Instant communication is awesome, but what happens when a total leech finds you online, and then stalks you on all your other social media accounts? I’ll tell you that nothing good ever happens, that’s for sure.

How to avoid online creeps

The world is full enough of creeps as it is, but somehow they all love going online! If you find yourself being the object of their misplaced desire, here’s what you can do.

#1 Less is more. We all love our selfies and showing off the goods, from time to time. Thanks to social media, we’re able to put our best assets on display for all our friends to see and envy, and to possibly even attract new friends. But oftentimes, less is more.

Even more unfortunately, many people think that sharing a couple of cleavage shots and the occasional bikini pic won’t invite a couple of creeps into their online social sphere. Wrong! To avoid having the online creeps come out at night, stop posting pictures of you with low-cut shirts and short skirts, stop with the pouty duck faces.

If you want to take a selfie, take one of you in a turtleneck from the Gap. Just get a big comfy oversized Gap turtleneck and take your pic from the neck up. Try it and say goodbye to the creepy men only looking at your chest.

#2 Privatize yourself. If you find yourself getting a new friend request from dudes that you might have anywhere from 1-5 friends in common, that doesn’t mean you have to add them. If you see that your “mutual friends” are all some of your attractive female friends, it’s pretty obvious this dude is a troll, and he’s just adding you, because in your little avatar photo or whatever profile pic you have up, your blonde hair looks ah-maze with that Valencia filter.

Let’s be serious here, he’s not looking at your hair in the pic, and he’s probably adding you because he can see down your shirt or he thinks you have some photos where he can. If you don’t want to get hit up by rando-types like this, make yourself harder to find. Privatize your photos, make yourself much harder to find via search, and change your settings so that your friends and social networks can’t see all your friends and contacts.

#3 Ignore. Silence goes a long way. If you don’t want to have any interaction with a creeper who messages you or tries to hit on you, then simply just ignore any and all things they send. If a guy sends you a message saying “hey, you’re cute,” then it’s fine to feel flattered! But if he sends you a sleazy list of all the nasty things he wants to do to you, back away and report the fool.

You don’t owe some random creep your appreciation, just because he gave you a compliment. You have a right to get creeped out by him, and you have every right to respond in any way you see fit.

#4 Play pretend. If you’ve ever seen the movie Home Alone, which I’m sure you have, then just pull a Kevin McCallister move, and pretend to be someone else when a stranger or online douchebag tries to hit on you. You could pretend to be your mother, your military father, or even your boyfriend.

This would involve you actually replying back to whatever nonsense they have sent you, but it would be something along the lines of how you’re just her mom checking all her Facebook messages for the day to make sure there are no red flags popping up, because just last week, you guys had to get the police involved because a guy messaged your daughter something along the lines saying “I wnt to hit u up grl!” and how you thought this was a real threat and possible danger to your daughter, and so you now have all the passwords for all her accounts, as per police orders.

You get the idea, right? Whoever you decide to be, be great. Be Kevin McCallister-great.

#5 Be direct and stern. A very simple way to let someone know you have no interest in talking to them is by simply telling them you’re not interested. You can be gentle at first, but in time, you’ll need to up the ante by giving them a big fat “NO!” If the creep continues to message you, it just shows that this person has no regard for your feelings, and must therefore be in your list of blocked users.

#6 Be creepy back to them. An eye for an eye. If a troll is on the prowl and trying to mack it to you, and you can’t seem to get rid of them, then start acting like how they are acting, except a little differently.

Whatever you do though, remember that a photo can tell a story on its own. You don’t need to utter a word, not one. Let him simmer on the social media presence you’ve now created. He’ll probably leave you alone after a few messages of disgusting photos. If he doesn’t, he’s what is wrong with the world, and the reason why we all can’t have nice things.

#7 Public Shaming. This one is a bit harsh, but I’ve seen it done over and over again, and as a bystander, it’s hilarious and amazing. As the creepy dude, it’s just plain embarrassing. For example, a girl friend of mine recently posted private messages from a guy that she didn’t know. And now this guy wishes he never knew who she was.

Long story short, this guy had been stalking and trolling her Facebook page, and started telling people around town that they were dating. But the world is actually not that big, and thanks to the internet, our networks are even more connected and little did he know that their networks were essentially 6 degrees of Kevin Bacon, and she found out about this ridiculousness through a friend of a friend.

This prompted her to reply to the creep she didn’t know, asking him why he was telling people they were dating when in fact they didn’t even know each other. To make sure the creep learned his lesson, she made sure to post screenshots of the messages to her Facebook page. Word on the social media vine is that he’s never been seen again.

#8 Be selective. Just as trolls find you, you also have the ability to find out about them. The great thing about online dating is that you are free to browse as you please, however often you want. You have the ability to accept or decline friend requests. It’s more than okay to be picky, when you are possibly picking a lover, so never settle for anything less than what you truly want out of love.

If you’re uncertain about someone, take a few minutes and do a Google search to see if you find anything resembling red flags. If you find a mug shot, you’ve found a red flag. I don’t care what it’s for. Do you really want your friends trying to search your boyfriend on Facebook, only to accidentally type his name into their Google search bar and find his mug shot? I don’t think so.

It doesn’t even have to be a mugshot, either. He could be affiliated with a gang of racist, misogynist, bigoted creeps, and that would be enough to make you swipe left.

#9 Auto-response. If the creepy guy just won’t leave you alone, then decide on one catch phrase or reply that you’ll send for every message you receive. For example, when people go on vacation from work, sometimes they set up an automated email response that might say something like “This message has been received. I am currently out of the office and traveling. Should this be an emergency, please call the main office at the following number.”

If the creepy guy keeps messaging you, figure out what you want your automated text response to be, and stick with it, no matter what. Eventually, he’ll probably grow tired of your generated robot reply, so make sure you come up with something creative.

A good place to start would be something along the lines of “I am currently traveling in space, and will not be replying to this message or any other message you send. Ever. If this is an emergency, please call 911 or your mother.”

The internet is a breeding ground for creeps with nothing better to do, and they hide under a veil of anonymity. Don’t fall victim to their creeptastic ways by heeding the above advice! 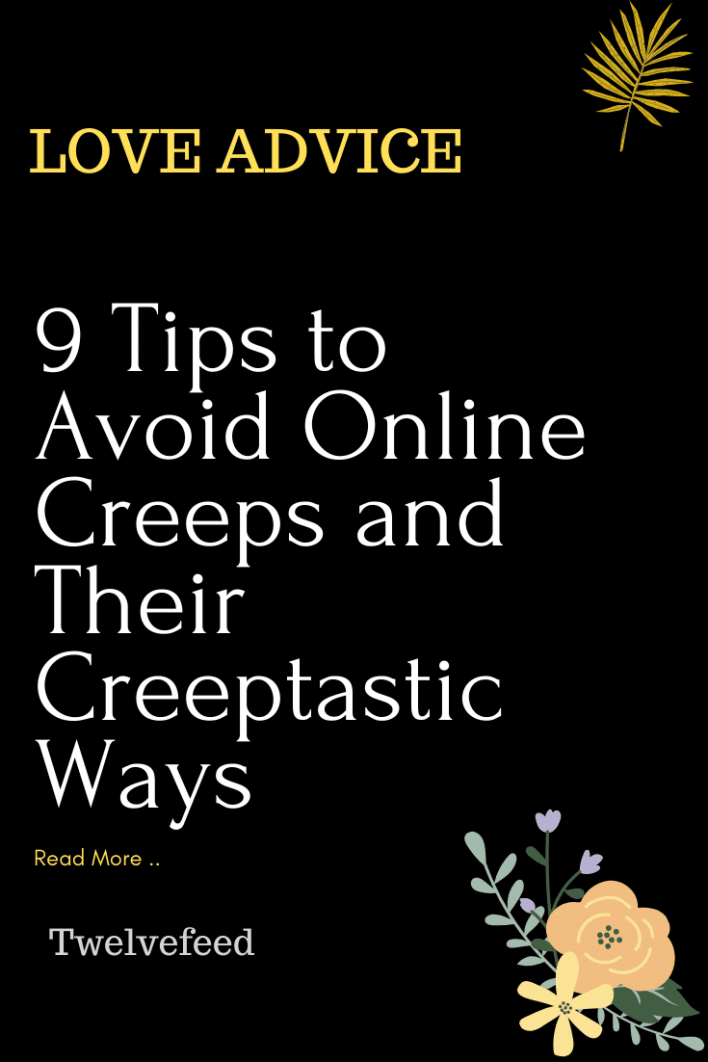 8 Ways to Confront a Cheater Who Plays the Victim Card

Pulling Out Is Completely Safe and Other Bad S*x Advice