The majority of women are unhappy with their breasts. According to the International Journal of Sexual Health, the vast majority of women aren’t satisfied with the way their boobs look and feel. Women can find many things to become obsessed with, and their body image is definitely no exception.

Big, medium, small, extra small… EXTRA big – the fact is this: men seem to love them all, so why don’t women? As children, we’re taught to love our bodies, no matter what the circumstance. So why are women so down on their two loveliest of assets?

Female portrayals in the media continue to tear down the self-esteem of the average woman. Impossible standards of women with itty-bitty waists and ginormous breasts are set, thanks to their prevalent presence in the media.

Trust me, there’s absolutely no reason to be down on your fantastic titties. No two boobs are the same… literally! Breasts are all built differently, and they’re all amazing. What you might think is the weirdest breast trait in the world is probably one of the most common. We’re looking at some up close and personal breast traits, and why you shouldn’t fret about your amazing rack!

Five fun facts about your breasts

Breasts do wonders for women’s curves, femininity, motherhood, and sexuality. So before we get into the nitty-gritty-titty truth about whether your boobs are “normal” or not, let’s delve into some fantastically fun facts about what’s hiding under your shirt!

#1 Your breasts can bring you to orgasm. One study suggests that breast and nipple play can get women highly aroused to the point of orgasm, or affectionately referred to as a “nipplegasm!” I’d love to see the girl who made that claim. Still, if that’s a true story, it just goes to show how powerful those breastly points are!

#2 Breast erections? Just like the penis, breasts swell up when aroused, and the nipples will become erect! Or hey, maybe it’s just cold out!

#4 Your boobs are the key to weight loss? Women who breastfeed their child for up to six months may actually end up losing weight!

#5 Setting world records. According to the Guinness Book of World Records, the world’s largest natural breasts belong to Annie Hawkins-Turner whose chest comes in at a whopping US bra size of 52I! Annie, despite getting taunted by strangers for her gigantic breasts, has used them to her advantage and now works as a fetish model and entrepreneur going under the pseudonym “Norma Stitz.” You go, Annie!

Help! My breasts are…

Women can obsess over the tiniest thing on their breasts and somehow convince themselves that they’ve been saddled with a freaky pair. Not true! Now that we’re a little more acquainted with our breasts and all of their fascinating facets, let’s get into the true facts that are hardly ever talked about!

Breasts are often shown as these perfectly round, full cups with proportional nipples. In reality, breasts are almost never round in shape. Because of gravity, natural and normal breasts will actual have a fuller bottom cup and more of a “slope” effect on top. Breasts come in all sorts of amazing shapes, from round, flat, fuller bottoms, to even massively pointed ones *think: Madonna bra!* and guess what? They’re all normal!

This is especially true of women who have just given birth, whose areolae can become incredibly dark while lactating or breastfeeding. While this usually goes away for new mothers, just know that it’s beyond normal for your areolae to be darker than your skin color.

#3 My nipples are too big, or too small. Who are you, the Goldilocks of nipples? Who says what diameters nipples should be? Whether your areolae is super wide, teeny tiny, inverted or your actually nipple is flat or protrudes far out, it’s all normal!

While it’s normal, if you feel self-conscious about the stretch marks on your body, various creams can be used to prevent or lessen their appearance. But why spend your precious time worrying about it when you should be focusing on getting busy with your lover?

#5 My breasts are sagging. The truth is that women who were blessed with large and lovely titties aren’t going to keep them in Pamela Anderson pristine condition. Natural, large breasts are going to sag – that’s gravity for you!

If your breasts are especially large, they may end up sagging whether you’re 14 or 40. Instead of fretting about the unchangeable status of your luscious, drooping breasts, work your gorgeous curves, and enjoy your fantastically large rack!

#6 I have nipple hairs. You know how men can get some coarse hairs around their nipples? Well, guess what? Women get that, too! Yeah, it sucks having *another* thing to tweeze and care for, but that’s life. If you think you have an abnormal set just because of a couple of hairs, then you’re totally mistaken.

If the hairs around your nipples bother you so much, simply tweeze them out. There is also the option of laser hair removal or electrolysis *never shave it, ladies!*, but that should only be considered for very extreme cases.

#7 My breasts are super squishy. Breast consistencies are all different. Your breast tissues may be firm and hard, or they may be squishy and tender. Both options are totally normal. Be sure to stay on top of your pap smear appointments, however, as certain types of breast tissues can make it harder to detect lumps!

#8 One breast is bigger than the other. Yours and everybody else’s. In fact, many medical studies indicate that the right side of your body is slightly larger than your left side, so your symmetry issues likely extend beyond your breasts, they’re just less noticeable.

Breasts are like sisters, not twins, meaning they’ll never look exactly the same! If one breast is noticeably larger than the other, simply buy a bra that fits your larger breast, and use a gel insert in the other cup. My last boyfriend’s ex-girlfriend had uneven breasts, and he’d told me he’d never cared, and it was all sexy to him. I’ve since met many women who have unevenly-sized breasts and were completely confident in their bodies, and you should be too!

Embrace your body! Alright, so you have a few blips here and there, but who doesn’t? Beauty standards should not be decided by the media, it should be decided by YOU! Don’t let anyone else tell you what true beauty means.

Big, small, hairy, bald, all bodies and all breasts are absolutely amazing and definitely something to be adored, not scorned, especially not by their owners! After all, if we were all the same, how boring would life be? 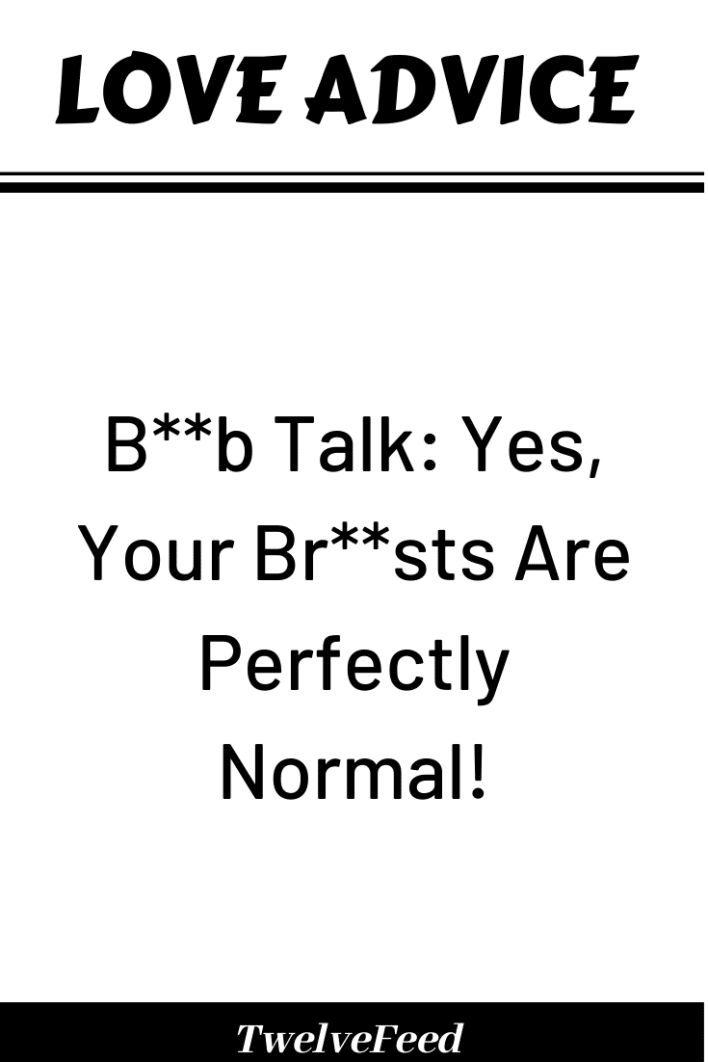 Still Living with Your Parents at 30: The New Normal?

How to Back Out of a Date Without Being Rude