There are many things we keep hidden during the beginning of a relationship. The problem is, these things we keep from our significant others are typically the things haunting the relationship later on. If you hide the crazy too long, and then let it all out at once, it is nothing but, well, crazy. And these deep questions to ask your boyfriend can help you avoid that.
Being yourself is key to any successful union, including being honest and asking uncomfortable questions. If you get to a point in your relationship where things are getting serious, proceed with caution. Those things that you think are not such a big deal become a major kink in the relationship chain if not addressed early on.

30 deep questions to ask your boyfriend
The problem in most relationships is that we are afraid to ask intimate questions upfront for fear we’ll make someone uncomfortable or send them a message that we are moving too quickly. When you don’t ask the important questions, you run the risk of falling in love with someone who isn’t right for you.

#1 Are there things you have done in your past I should know about? The last thing you want to do is to run into someone from their past to find out that they were the biggest player that ever lived, or that they spent time in “juvie.” Giving them the floor to make any confessions about their past ensures you never get blindsided.

#2 What type of guy were you before you met me?  Is he the serial monogamous, or the sleep with anything type of guy? You may have changed him, but it is nice to know who he was before you turned his eye.

#3 What are your old girlfriends like? Are you his “type”? Knowing what his other girlfriends were like might give you a perspective about what he looks for in a girl, and what it was about the other relationships that didn’t work, and this could help you avoid making the same mistakes.

#4 What broke up your previous relationships? Sometimes, there are deal breakers a guy won’t come right out and tell you about. By learning what broke up his old relationship, it provides you insight into whether he has been hurt, cheated on, or if there was something that simply wouldn’t do for a relationship to move forward.

#6 Who was the first girl to break your heart and how did she do it? We all have baggage in our past. Knowing what is in his issue suitcase helps you navigate difficult times with him, avoid triggers like trust problems, and even reassure him that you aren’t his ex, nor would you ever do what she did.

#7 What’s your five-year plan? Does his five-year plan involve a family and wife, or is it all about his career? Guys who have plans rarely veer from them, so knowing what his intentions are up front, is the best way to find out how you will fit into them. Or if you will at all.

#8 Do you like children, and do you want to have them? Women typically put off this question because we fear scaring the guy off and make them think our biological clock is ticking. The truth is that no relationship is going to be healthy if you want different things out of life and children are about the biggest change a relationship goes through.
There are some who absolutely can’t live with them and those who can’t live without. Just make sure you are on the same page before falling in love.

#9 What is your biggest pet peeve? Those little things we do to irritate each other at the start don’t seem that big, but after time, they become deal breakers. Find out what his biggest pet peeve is so you know if it is something inherent in you or something you are capable of avoiding.
#10 What is a relationship deal breaker to you? What is it that he simply can’t live with in a relationship?

#11 Do you think divorce is okay? When you get married no one ever thinks they will get divorced, but there are some with a greater commitment to seeing it through. While others think if it isn’t going so well, divorce is a way out. It is important you both are on the same level of marriage commitment.

#12 If you do have children, is it important what religion they are raised? Even if he doesn’t attend mass, the religion he raises his children may be very important to him. And, if you aren’t the same, that could pose some serious problems not just for you two, but your families as well.

#13 What are your political beliefs? Politics are something people avoid because it tells a lot about who someone is. If he is ultra-conservative and you are a bra-burning liberal, being together is going to be pretty difficult without strife. You just see the world through a very different lens.

#14 What do you think about prejudice? We all hide our prejudice when we start dating for fear of judgment, but if he has some serious prejudices against some group or religion, that is something you may want to know before you hear the ugly later on.

#15 Do you think family is important? How important is his family in his life? Is it your family first, or the peripheral family, that guide his decisions? 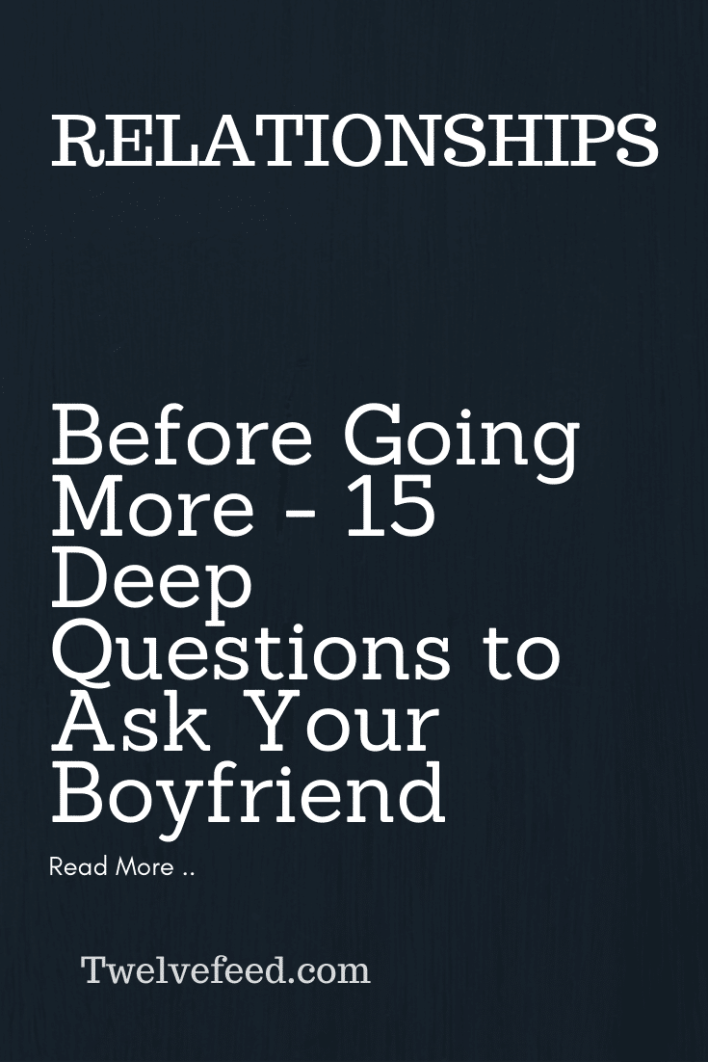 When a Female is Weeping - The Gent's Dos and Don'ts.

The Serious Face - 15 Points You Do that Hurt Her Feelings