Did you know that each of the Chinese Zodiac signs has a Western Zodiac equivalent? Both East and West Zodiac have 12 signs, but they have their own differences.

Jupiter has a lot to do with it. Jupiter takes twelve years to go through the Western Zodiac, spending around one year in each sign. As a general rule of thumb, it spends the Year of the Ox in Capricorn, the Year of the Snake in Taurus, the Year of the Rat in Sagittarius, and so on.

The Rat who won the race in the Chinese Zodiac is the equivalent to Sagittarius. Like Sagittarius, the Rat is adaptable and able to find the positive among the negatives. Jupiter is powerful in Sagittarius and the Rat is likewise considered a sign of luck in Chinese Astrology.

Like Capricorn, the Ox is down to earth, steady and organized. Both signs are highly industrious, able to focus on a task and see it through till the end. Both have strong earthy energy and both can be downright stubborn! Respect and power are important to these signs and both of them value all aspects of the material world.

Tigers are known for their rebellious streak and if Aquarius isn’t the sign of the rebel then I don’t know who is! Both of these signs are resistant to authority and prefer to follow the beat of their own drum. Their desire to stand out from the crowd and, above all, not to follow it makes them known for their courage. Both possess leadership skills, though both can be hard to get along with.

As the second home of Jupiter, the Rabbit is likewise considered to be a lucky sign. Dreamers and artists, Rabbits and Pisces have a strong imagination and appreciate aesthetic beauty. They have kind hearts and can both be very passionate about their views. Both of these signs can struggle with escapism as neither like conflict.

In the Chinese Zodiac, the Dragon is the most revered of all the signs, commanding respect and attention wherever they go. As the first sign of the Western Zodiac, Aries is just as strong-minded and respected. Aries is a sign of leadership, the go-getter who knows what they want and isn’t afraid to get it. The Dragon is highly independent. It is difficult telling either of these signs what to do!

Like Taurus, the Snake possesses a special sort of wisdom that helps them moved forward cautiously but cleverly in life. Both of these signs have the ability to withstand a lot and both enjoy the benefits of the material world. When challenges, both of them are fierce opponents! They are also highly sensual signs.

Plenty of mental energy with these two! The Horse is someone of great intelligence who thinks quickly and has oodles of curiosity. It’s the same with Gemini – a quick-thinker who is always looking for new adventures. Often, the Horse and Gemini will have multiple talents and skills in a variety of areas. Both of these signs are charming and know how to win you round. Both can struggle with commitment!

Like the Goat, the sign of Cancer is a sensitive and imaginative sign. In fact, both of these signs are the most artistic of their zodiacs! They are both extraordinarily talented and usually have a special gift for writing, painting, drawing and other forms of the arts. Because of their high sensitivity, both of these signs can be quite moody.

The Monkey is a highly sociable sign and also very intelligent. While they are a little more flexible than Leo, both of these signs know how to have fun and have a very bold streak. Both enjoy having an audience and being the center of attention. They can both be very persuasive, though in their own unique ways: the Monkey with words and Leo with action. Both can come across as a little arrogant at times, though their hearts are in the right place.

The responsible signs of each zodiac, both the Rooster and Virgo are deeply concerned with doing a good job and ensuring everything is running smoothly. The Rooster is a little more loud-mouthed than Virgo, who is more reserved, but at the core, both of them have the same aim: to get things done. Both are highly analytical. They can both be accused of interfering at times.

The ultimate defender of the underdog, the Dog is someone who believes in justice and fairness above all else. They are similar to their Western counterpart, Libra, who is represented by the scales of justice. Both of these signs seek companionship. Both of them will fight for a worthy cause and do anything to ensure justice is served. Both can be stubborn in their own way.

Like the Pig, Scorpio is passionate and secretive. Both of these signs enjoy carnal pleasures – the Pig enjoys a good romp in the hay while Scorpio is the sign of seduction! The primary difference between these two is that the Pig comes across as more jovial and less intense, while Scorpio’s intensity shines through. The Pig is also more naïve than Scorpio, but both of them have a dark edge that gives them the ability to delve deeply into themselves and others.

So there you have it, the Chinese Zodiac signs and their Western Equivalents! 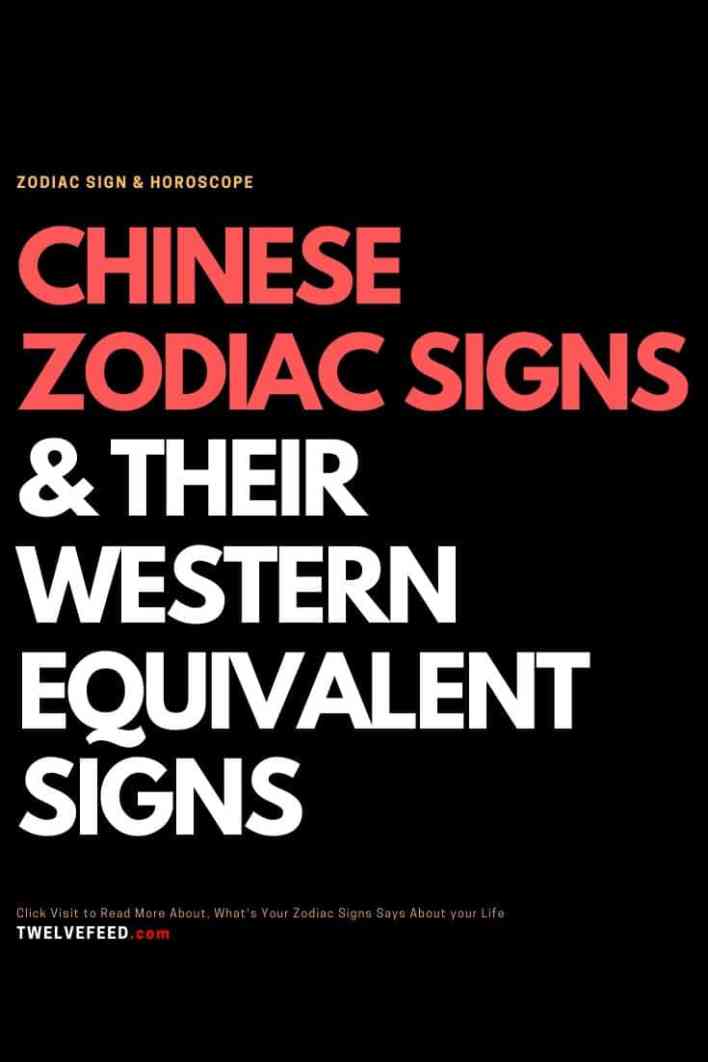 How To Keep The Social In Social Distance, Based On Your Rising Sign