There are a ton of guys out there who have never had a girlfriend. They walk around with all their friends who seem to be checking in with their lady friends, and are left to question why it’s not them.

Some may act like they don’t care or don’t even want a girlfriend. But the truth is, many guys who haven’t been lucky enough to score an awesome gal think that there’s something wrong with them. They sit there and wonder what they’re doing wrong.

Are you doing something wrong?

Recently, I woke up to some random guy sleeping on my couch. No worries! It was just my roommate’s friend, who needed a place to crash after a night out. But since I was up early and cooking breakfast, he roused himself, and we got acquainted really fast.

Now, despite the fact that I had never met this guy before, one of the first bits of information he divulged to me was that he’s never had a girlfriend. Just couldn’t find “the one.” And that got me thinking: why is it that some guys who seem to be perfectly fine, attractive, and successful have never had a girlfriend?

Being well over appropriate dating age, he was definitely one of the many men who questioned the reasons as to why. He even asked me what I thought about it. I didn’t know him well enough at the time to tell him why. But based on my first impression, I suspected a few reasons. [Read: The 10 biggest dating turn offs for women]

Why you’ve never had a girlfriend

While I can’t pinpoint the exact reason you’ve never had a girlfriend, I can certainly come up with a few reasons as to why something is off. Coming from a girl, here are the factors that may be inhibiting your girlfriend-catching skills.

It’s perfectly fine to have never had a girlfriend. Just don’t go around telling cute girls this, unless you’re purposely trying to evade their interest. A woman’s imagination is your worst enemy.

#2 No confidence. Confidence is huge when it comes to women finding someone attractive. And by telling me that you’ve never had a girlfriend and just “can’t figure out why,” I can tell right away that you’ve already lost confidence in your ability to get one, and that’s just not attractive. You need confidence to even ask a girl out in the first place. So pluck up the courage and try! Again and again, if necessary. [Read: 9 subtle differences between a confident and arrogant man]

#3 You give away too much information. Dear guy on couch, I really didn’t need to know your life story the first day I met you—and especially not at 7:30 in the morning, before I’d even had my morning tea. Women like mystery! By divulging your entire childhood and life problems right away, you take away the excitement of getting to know you.

These are really important factors that women want to know before making you their boyfriend. This is where you find similarities between the two of you. The other random information can wait until you’ve got her. [Read: 18 foolproof ways to make a girl fall in love with you even before you ask her out]

If she starts complaining or talking about another guy, don’t respond. Or better yet, tell her that he’s being an idiot and you would never treat a girl that way. This makes her start picturing you with a girlfriend, and how you would act as a boyfriend. A woman’s imagination can also be your best friend. [Read: How to avoid a girl’s friend zone and make her want you instead]

#7 You’re too picky. One problem you may have is being far too picky when it comes to the girls you want to date. You might have your standards set way too high and that’s why you can’t find “the one.” If you’re thinking that there’s someone out there who is 100% everything you want, then you should just give up.

That’s not real. There are SO many amazing women out there that you’re blind to, just because she might like oatmeal and you think it looks like vomit. Come on. Broaden your horizons, dude.

#8 You don’t date. How can you get a girlfriend if you don’t take a girl out on a date? If you think texting and Facebooking a woman is all you need to do to make yourself available, it’s obvious why you don’t have a girlfriend.

Dating is a crucial part of starting a relationship. It’s where the excitement is. It’s where the chemistry begins. You need to go on *actual, not cyber* dates with women.

#9 You are clueless when it comes to flirting. Flirting is a quick way to make a girl know you’re interested in her. If you can’t flirt, how is she ever going to know that you’re interested? It’s also a really fun way to build chemistry with someone. Practice makes perfect, so practice flirting! [Read: 12 essential flirting tips every guy needs to know]

#10 You can’t read signs. Maybe you just have no idea when a woman is interested in you and that inhibits your ability to ask her out and potentially make her your lady. Laughing a lot around you is definitely a sign she’s interested. You can also ask some close girl friends how you can tell if she has an interest in you. [Read: 12 signs she really likes you and wants you to ask her out]

#11 You blame women. “They’re all just crazy.” Ahem! Excuse me? No! Women are not the problem—particularly if you’re the one who hasn’t had a girlfriend, but they have had boyfriends before. If you start blaming women for your inability to pick up a girl, you will constantly hold resentment for them.

This will transfer from woman to woman and you will, subconsciously, be out of the game before it even starts. You’ll immediately have a mindset that says she won’t date you and that will change your personality and the way you treat her. Stop it! 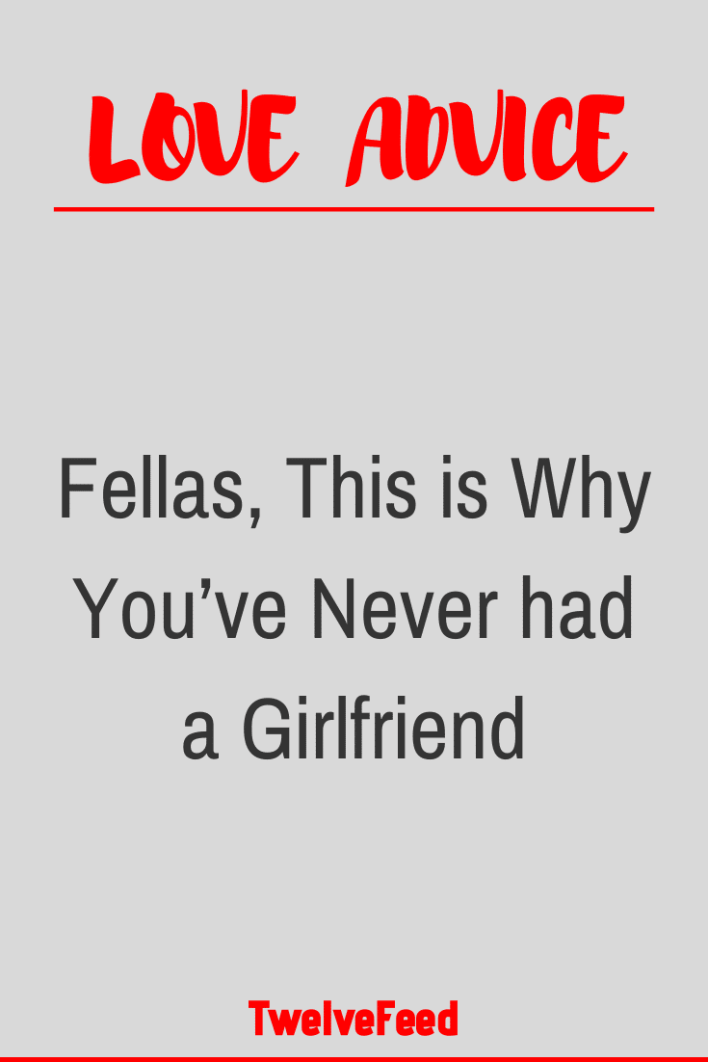 30 Would You Rather Questions that’ll Leave You Thinking