The Friend Zone sounds exactly like it is. When you start to like a friend, and they don’t reciprocate that feeling, you will be relegated to the Friend Zone. It is the area where friendship starts to get blurry. It’s where platonic happiness and camaraderie goes to die!

But don’t take it as a bad thing. The Friend Zone only seems bad when you think it’s your only option. You don’t have to be stuck in it if you don’t want to. You’re supposed to climb out of it and move on.

It’s not the worst thing that can happen, because a lot of people will support you in the aftermath. When someone puts you in the Friend Zone, your real friends start to rise to the occasion. You get all this support and a big chunk of society sympathizes with you. But what happens when you are on the other side of that relationship? What happens to the person who put someone in the Friend Zone?

They’ve been called many things – the best friend, the one, the love of your life – but whatever their role is in your life, when they decide to put you in the Friend Zone, they are immediately dubbed as Evil Incarnate or shady friends who use people.

A person who puts someone who likes them in the Friend Zone suddenly becomes the bad guy in the scenario, because they were honest enough to say no to something that they never wanted in the first place.

It’s a subjective situation in a sense that people have different reasons as to why they reject the affections of a friend. It doesn’t even happen to friends exclusively. When you meet someone new and they decide that they’d rather be your friend, they can still put you in the Friend Zone. [Read: Are you two just friends or more than friends already?]

Why do people get thrown into the Friend Zone?

Whenever Friendzoners give you a reason as to why they decided to consider you as just a friend, you don’t really believe them at first. People who get rejected tend to think that it’s all about them, and that they just didn’t live up to the standards of the person they like.

That’s why people who reject their friends become the villains. They’re doing what they want at the expense of someone else’s feelings. But have you ever really considered their feelings on the matter?

The Friendzoner had no idea what was coming. They weren’t prepared for the consequences that the actions of their friend would produce. The situation hits them out of nowhere. People then expect them to be the bigger person by entertaining the idea of being in a relationship with their friend, even if they don’t want to.

If you really want to understand where they’re coming from, here are some truths that can make you think twice about putting the person who rejected you in a bad light.

#1 They see you as an immediate family member. When two friends get really close, it’s only understandable that one or both will assume that they’ve passed all familial boundaries when it comes to their relationship. They really do see you as a brother or sister, and it would totally gross them out if they started to consider doing intimate things with you.

#2 They like someone else. It’s not your fault. It’s fate. Someone else took your place in their heart, and you just missed the mark when the opportunity was there. It’s not that you’re not enough. It’s just that they’ve found someone else to give their affection to.

#3 They don’t want a relationship with you. Just because you told someone that you like them, doesn’t mean that they’re automatically obligated to reciprocate the feeling. Your admission can surprise a friend, especially if they had no idea that you were harboring deeper feelings for them. You can either give them time to think about what they want to do or you can resolve yourself to the fact that it just won’t work for them.

When someone wants to put you in the Friend Zone, they will do it and half the time, it’s without any remorse. That’s just how life is.

How to stay in the Friend Zone

In order to dismiss the idea of a relationship between two friends, you need to prepare for it, before anything goes beyond your relationship as friends. If you don’t want to hurt your friend or end up being the person who dismisses them, here’s what you have to do:

#1 Limit your physical contact. You can hug a friend when you see them, and you can kiss their cheek when you leave. It’s an innocent act that has no bearing, unless they’re already in love with you. Physical contact can trigger the release of hormones that can trick a person into thinking that they’re in love. So, try not to watch a movie while cuddling your friend, or sleeping next to them when you’re crashing at each other’s places. [Read: 25 things that might make her desire you more]

#2 No pet names. Terms of endearment will just confuse your friend. Yes, you care, but you don’t need to verbalize it. This is especially important if you’re not naturally like that with your other friends.

#3 Try not to spend time alone together. If your other friends are not available, try to avoid spending time with your friend. You may think that it’s okay, because you’re not really doing anything intimate, but spending time together allows you to see each other explicitly. You find out so many lovable things about each other that you don’t realize that you’ve appreciated those things on another level, until it hits you that you want to be more than friends.

#4 Watch for the signs. A person in love is easy to spot. You can deny it all you want, but your instinct will tell you when someone likes you. They can deny it all they want, but the feeling is obvious once it’s there. If this happens, you can start to lessen the time you spend together, and minimize your conversations to the necessary exchanges until that feeling fades away. [Read: 18 signs your friend is starting to like you]

#5 Stop asking for love advice. When a friend sees you suffering, they will definitely want to save you from whatever trouble you’re in. When you ask for love advice, you’re also enumerating what you want out of your love life. When a friend who likes you hears that, they will immediately rise to the challenge by trying to provide your needs for you. If you must ask for advice on love, ask a person who’s already in a relationship.

#6 Say it out loud. Announce it to no one in particular. When you and your friend are talking, casually slip it in the conversation. Tell them that you would never in a million years consider dating a friend. That usually stops them in their tracks when feelings of a deeper relationship start to evolve in their minds. [Read: How to nicely reject someone who likes you]

Before you react and say that this sounds like bad advice, put yourself in the shoes of the person who’s likely to lose a friend because of this kind of misunderstanding. Have you ever been labeled a tease? Have you ever lost someone you love because you couldn’t love them the way they wanted you to? Have you ever wanted to keep being friends with someone who doesn’t want to anymore?

Pain goes both ways when two people are faced with the prospect of the Friend Zone. If you’re brave enough, go ahead and admit how you feel or reject the person who does like you. But if there’s a way to avoid hurting anyone, I’d take that opportunity any day and never feel bad about it.

If you’ve been rejected by someone you like, as much as it hurts you, try to see their point of view before you get out the pitchforks. And ask yourself this important question, do you really want to turn this sweet friend of yours into a villain just because you’re blinded by your own desires? 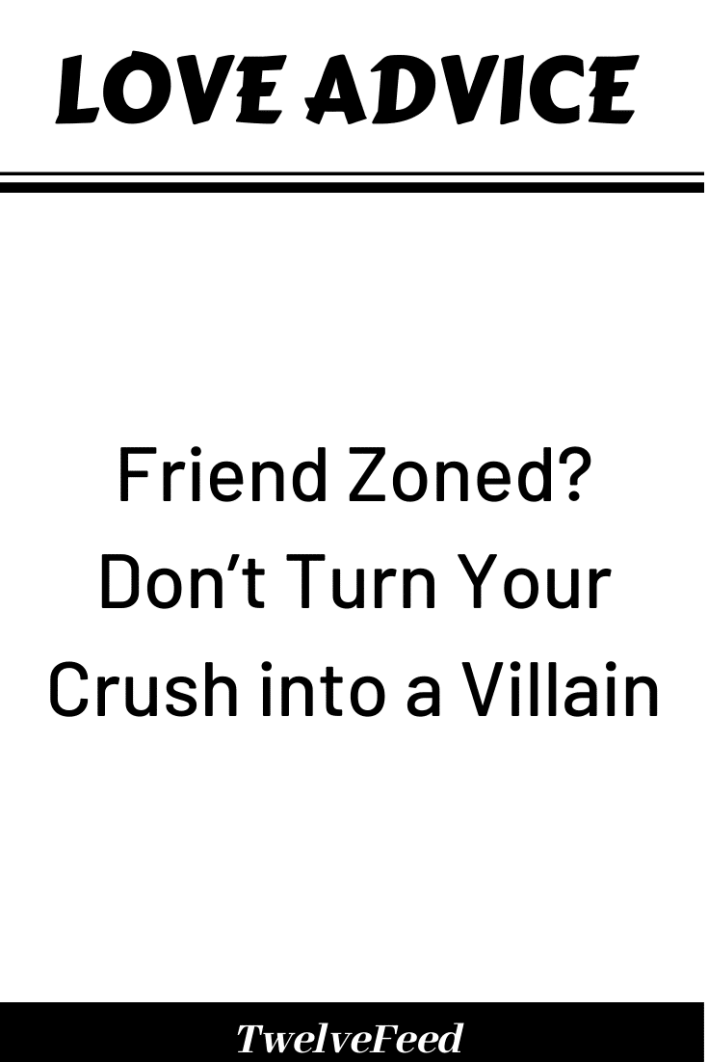 10 Signs The Honeymoon Stage of Your Relationship is Over