Ariana Grande has been making headlines a lot lately, and not just for the release of her hotly-anticipated new album. The actress-turned-singer split with rapper Mac Miller in May of this year, citing the relationship as “toxic”. While fans mourned the loss of a relationship they shipped, they had no idea that things were about to take a twist. According to various reports, Ariana is now engaged to Saturday Night Live star Pete Davidson, and the world is reeling. For those of you as confused as we are, we’ve broken the entire relationship down into bitesize chunks so you can get the scoop. Let’s take a look.

Ariana Grande first meets Pete Davidson as she appears as a special guest on an episode of Saturday Night Live.

Reports surface of Ariana’s split with Mac Miller after two years of dating, with one fan, later tweeting at the “Side to Side” singer to accuse her of leaving Miller for another man after he wrote a ten-song album about her. Ari clapped back, claiming that wasn’t the case and that the relationship was “toxic”.

Ariana attends a Saturday Night Live after-party, proving you can’t keep a girl down for long. She’s pictured later in the evening carrying a cloud shaped phone case that looks identical to the one that SNL star Pete Davidson has.

Ari’s fans go into a frenzy when the star posts an Instagram photo with a cloud emoji in the caption. Clouds have always been a firm fave of the singer, who used to post them frequently back in 2014. What does it all mean? We don’t have a clue, but clouds are a recurring theme here.

During an appearance on Complex’s Open Late Show, Pete confesses that he has split from his long-term partner, Cazzie David. Cazzie is the daughter of Larry David, aka, comedy royalty. Pete insists that they’re on good terms. Less than two weeks prior she had posted a photo on her Instagram account calling him her BFF. That’s her best friend forever for those of you not down with the lingo.

We told you clouds are a recurring theme. Pete Davidson posts a picture with his left hand covering his face. Eagle-eyed fans quickly notice that he has a cloud tattooed on his middle finger. The comic does have a host of strange tattoos though, so it could literally mean nothing, but this is the internet and we like to theorize.

By this point, fans are starting to get a little cray, especially when Bossip comes out with the first report that Ariana and Pete are seeing each other. By now, the pair has started liking and commenting on more of each other’s posts on Instagram, which we all know means one thing – true love 2018 style.

Pete is caught on camera by a fan hanging around Ariana and her entourage at the BMA’s. Not only that, but Getty Photos managed to snap a picture that clearly shows a cloud tattoo on Ariana’s finger, and the fans officially lose their minds. News outlets start blasting off with reports of the relationship, and Ari and Pete constantly appear in the comments sections on each other’s Instagram pages, with sickeningly cute quips.

Although the two didn’t officially announce their courtship, it became pretty obvious to anyone with a set of eyes and access to the internet.

Pete posts a photo of himself with his arm around the pint-sized singer as they both strike a pose dressed in full Hogwarts merch. The picture is captioned “The chamber of secrets has been opened”. Many assume that this is a tongue-in-cheek confirmation of their relationship.

Clearly, a man who likes his ink, Pete pays tribute to his new love by getting Ariana’s iconic bunny ears mask from the album Dangerous Woman tattooed on his neck, along with her initials on his thumb. Apparently, two matching clouds weren’t enough. Things muddle along nicely for the next few weeks in a Harry Potter, love-drunk blur with photos aplenty.

Reports circulate that the couple, who have been dating for less than a month, are engaged. They supposedly attended a party hosted by Robert Pattinson and told friends. Ari seems to confirm the news via replies to comments, tweets, and likes. In the next few days, Pete removes a tattoo that paid tribute to his ex-girlfriend Cazzie.

Pete posts a picture on Instagram that seems to confirm the engagement, showing both his and Ariana’s hands – clearly displaying a huge rock on her ring finger. He captions it “U know what you’d dream it be like? It’s better than that.”

Ariana shares an image from Spongebob Squarepants to her Instagram story. She captions the story, “Us in our new apartment with no furniture 1 speaker and red vines”, implying that she now has a new home and roommate. Fans assume that she has moved in with Davidson, although the couple has not confirmed this news. But in all fairness, after an engagement, it seems like a step that makes a lot of sense.

If you weren’t up to date on the relationship tea, then you are now. Do you think that it’s a match made in heaven or a match set for disaster? Let us know in the comments. 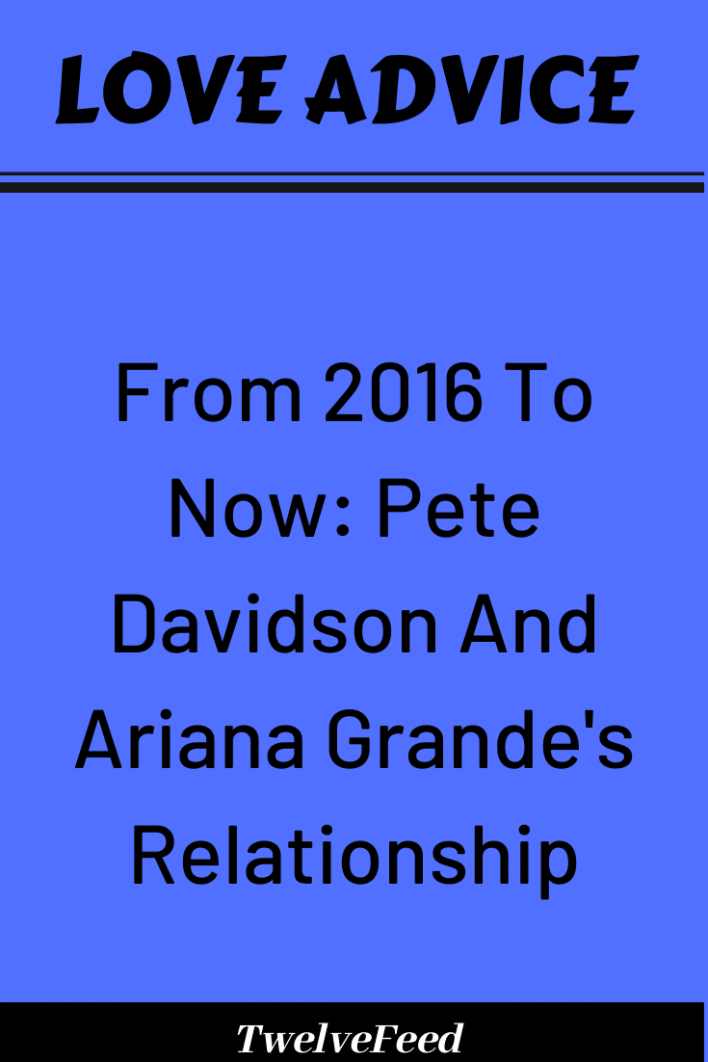 19 Signs Of A Strong Relationship That Will Last A Lifetime

If He Says Any Of These 18 Things During The Relationship, Run For The Hills