Everyone knows that the best way to communicate with someone is by being open and honest. Fat chance of that happening, if you’re planning on texting someone.

When we use emojis through text, we get a clearer picture of what a person is trying to say, or at least what they’re not saying. Does that even make sense?

Of course it doesn’t, because I don’t have any emojis on my laptop’s keyboard to get my point across. For moments like this, I prefer using the girl with her arm and palm up, which translates to “Whatever.”

Why people use emojis

Rather than torture people about the nuances of the text messages that you send, why not use an emoji to clarify your intent? With a smile, you can say “Hey, I am happy to talk to you.”

If you’re not, a smile can simply deflect any negative assumptions about your text saying, “I’m not in the mood to go out.”

Using emojis allows you to express yourself clearly, if not honestly. It can also be a way for you to make someone feel good or a way to tell someone that you’re feeling bad.

Of course, you can just describe how you’re feeling with words. But wouldn’t using emojis be the more efficient way to go about it? Unless you’re an avid fan of prose.

Still, there are other benefits to using emojis, and a lot of them have to do with couples. And isn’t that what you’re really here for?

Reasons why couples should use emojis more often

Aside from making the world a better and smiley-filled place, emojis have actually improved the relationship status of many couples. Here are a few emojis achieving that goal. [Read: Do you sext? Study reveals why you should start right away!]

#1 Eggplant emoji + cat emoji. A survey conducted by Match.com found that people who used emojis while texting had more sex than those who did not use any. It’s possible that expressing affection, even through text, makes couples more in tune with their sexuality. Being affectionate in person is a big marker for people who have a healthy amount of sex. Who knew texting could offer the same benefits?

#2 Couple emoji + pizza emoji. Aside from having more sex, couples who used emojis also went out on more dates. It is possible that the growing affection caused by using emojis urged couples to spend more time together personally. And it might be because it’s a bit classier to seduce your date in person, rather than sending them an eggplant and cat emoji.

#3 Ring emoji + bride emoji. Emoji users are also twice as likely to get married than their cold, emoji-less counterparts. Increased affection = increased possibility of a lifelong commitment. According to the survey, 62% of users wanted to get married someday, compared to the 30% who never typed a smiley face.

If these stats don’t convince you to use emojis more, we don’t know what will. Maybe finding an emoji-happy date may change your mind, especially if that person turns out to be the love of your life.

Emojis that couples should keep on their recents

Now that you know how emojis can work for you and your partner, here are some suggestions to keep the love flowing on your mobile phones.

For giving out compliments, or if you did something wrong.

Giving your partner compliments can significantly improve your connection to each other. Scientists even found that giving and receiving compliments boosts your individual and overall happiness. The best part is that you can never run out of compliments. [Read: 40 unbelievably cute things you can say to your crush]

#3 Trophy + girl/boy. “They should give you an award for Best Girl/Boyfriend.”

When you want to be cute, or if you did something wrong.

It’s good to send random messages that show your partner you’re thinking about them. You can even earn more brownie points by scoring high on being cute and affectionate. Remember, the goal is to make them smile. If it doesn’t work, just send them a monkey emoji. Works every time. [Read: 17 aww-so-sweet ways to say you’re sorry]

For planning out dates, or if you did something wrong.

Do this with caution, because a little misunderstanding can ruin a perfectly good date night. Your partner might be thinking you wanted to go to a nice, French restaurant, when what you really said was that you were going to watch the World Cup over chicken wings and a glass of beer.

Because you finally did something right. Or maybe you did something wrong, and a sext instead of actual sex is your punishment. [Read: 20 sexy text messages to start sexting dirty in no time]

Emojis you should never use

#1 Anything to do with a pig. For your safety.

#2 Bride and wedding ring. It might be better to express this in person.

#3 Weapons. Promote peace and love. And also, so you don’t give your partner any ideas.

Using emojis is a tried and true art. If it works for more than half of a varied sample size, it could work for you as well. [Read: 36 really sweet things to say to your boyfriend]

No matter what phone you’re using, there will always be a wide variety of emojis at your disposal. If you don’t have a smart phone *why?!*, you can make emoticons using symbols as well *good luck with that*.

Just remember that emojis may look adorable and cute, but they can help you send a more meaningful message whenever you’re away from your partner. Just ease up on the eggplant emojis, though, okay?

Try using different emoji combinations like the ones we mentioned above, so you and your partner have a lot more to talk about—and think about—when you’re apart. 😀 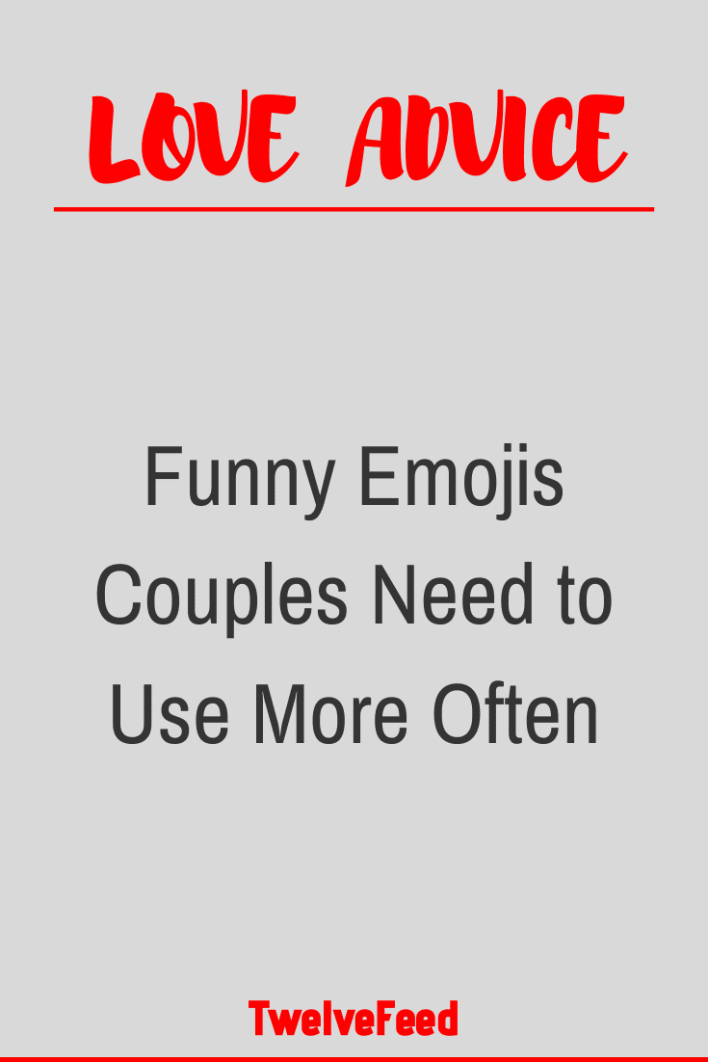