One of the biggest fears in the world of dating is the pain of ending a relationship.

It’s never easy to get over a break up or even move on.

Almost all the time, all the love you’ve built up over the duration of the relationship come crashing down on you in one instant when it all ends.

Getting over a breakup

If you really want to get over a breakup easily the next time you find yourself in a less than satisfactory relationship, then do yourself a favor and end the relationship before your partner decides to end it.

By being the first one to break up, you give yourself more power and control over the way the relationship ends.

[Read: How to fall out of love when you see no future]

Learning through an experience

I’ve always had a hard time ending a relationship.

In most of the relationships I’ve been through, I’ve tried to be the one who endures and waits for the partner to change for the better.

At times, I’ve known that a relationship was doomed to failure within the first couple of months. But I still held on, either until the girl dumps me, or until both of us just drift away from each other’s lives.

For most of my life, I thought I was doing the chivalrous thing.

I knew there was no ‘till death do us part’ in the dating world, but I liked clinging on to dear hope. It made me feel like I was giving it my all.

And when any of these bad relationships of mine did finally end, I was always devastated and took a long time to get over them. And what surprised me most was the ease with which my exes always got over me.

It was actually insulting and demeaning to see my exes hooking up with someone new in no time or plastering happy pictures on their facebook wall just a couple of weeks after our breakup, even as I was trying to persuade them into getting back with me. [Read: How to love again after being hurt]

I didn’t like the way most of my relationships were heading, and the damage it was doing to me.

I started dating someone again. But it was the same thing all over again. Both of us just wanted different things. Against my firm belief to never be the one to break up, I decided to end this relationship because, quite frankly, I sensed that there was no way the romance was going to last a lifetime. [Read: 7 secret signs of a bad relationship]

But as soon as I nervously ended the relationship, much to the shocked dismay of my girlfriend, I felt really good about myself. I was sad, but somehow I felt like I was on top of the world at the same time.

And by ending that all important relationship, I learnt an important lesson. Getting over a break up is really easy if you’re the first one to call the relationship off!

Why is it easier to get over a relationship by breaking up first?

#1 If you take the lead in ending a relationship, you’re mentally prepared for the inevitable ending even before the relationship is over. You know what you want and you’re completely sure of yourself.

#2 This is selfish, but watching your partner’s shocked response and behavior can help you overcome the heartbreak easily because you’re the one in complete control of the relationship at that point.

#4 Even if you regret your decision later, you can always console yourself saying it was you who called the relationship off because that’s what you wanted in the first place. [Read: Can you be friends with an ex after a breakup?]

Should you break up first just to get over your partner?

Let’s face it. If you are in a happy relationship, would you even think of breaking up? Of course not. But when you’re in a bad relationship that’s only draining you and making you feel weak, there’s no reason to stick around especially if you’ve tried your best to make it work already.

Breaking up first will definitely make it easier to deal with the heartbreak, but do it only if you see no future together. [Read: Dating facts that are worth knowing]

#1 Make a list of reasons. Be convinced about your decision. So you want to end the relationship, but why? Make a list of pros and cons and look through them every now and then. Sometimes, you need a piece of paper to convince you of a lost cause.

#2 Dealing with guilt. The only drawback of breaking up first is the guilt associated with it. When you end the relationship, you’re breaking someone’s heart. And when your new ex calls you over the phone crying hysterically, can you handle the guilt? [Read: Reasons behind why love hurts when it goes bad]

#3 Confusing emotions. Don’t end a relationship just to avoid going through a heartbreak. End the relationship only if you’re sure of what you want. If you break up for the wrong reasons, you’ll be left with a lot of confusing and conflicting emotions that can make you feel worse than any heartbreak. Should you stay? Should you go? Be sure of what you want.

Getting over a breakup may be easier if you’re the one who ends the relationship. But unless you’re certain about what your heart wants, you’ll end up feeling more messed in the head. [Read: Things you should do after a breakup to feel better]

The next time you find yourself in a relationship with no prospective happy ending, try to be the first one to walk out. You’ll understand how easy getting over a break up can be by being the first one to end the bad romance. 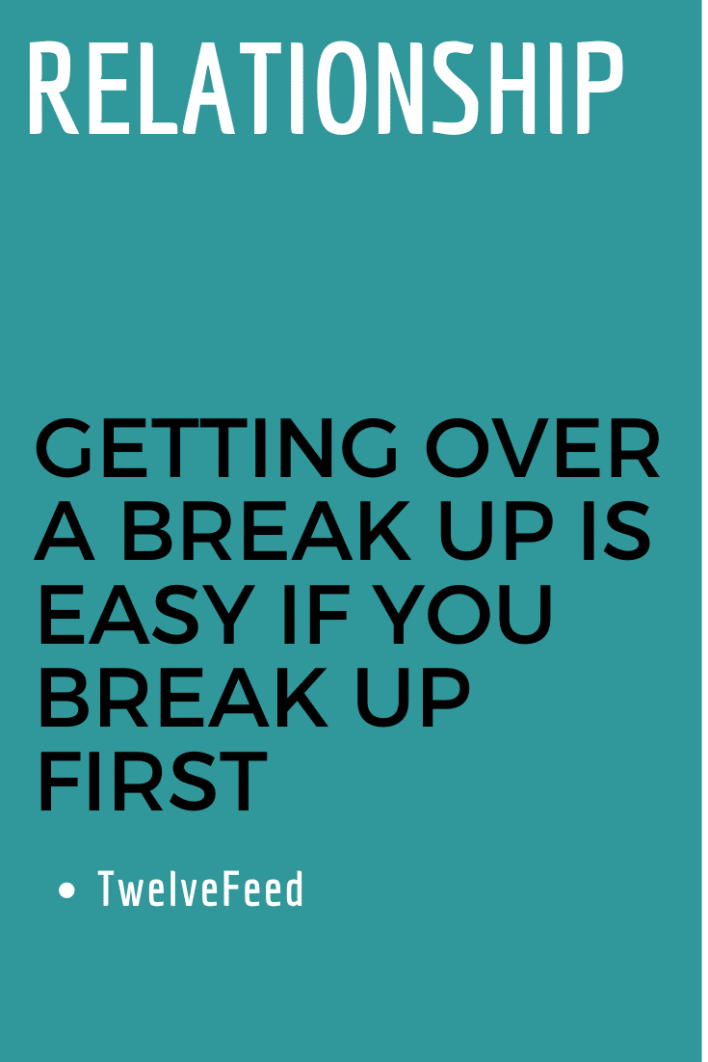 How to Love Someone without Smothering Them

The 4 zodiac signs that are the most intuitive