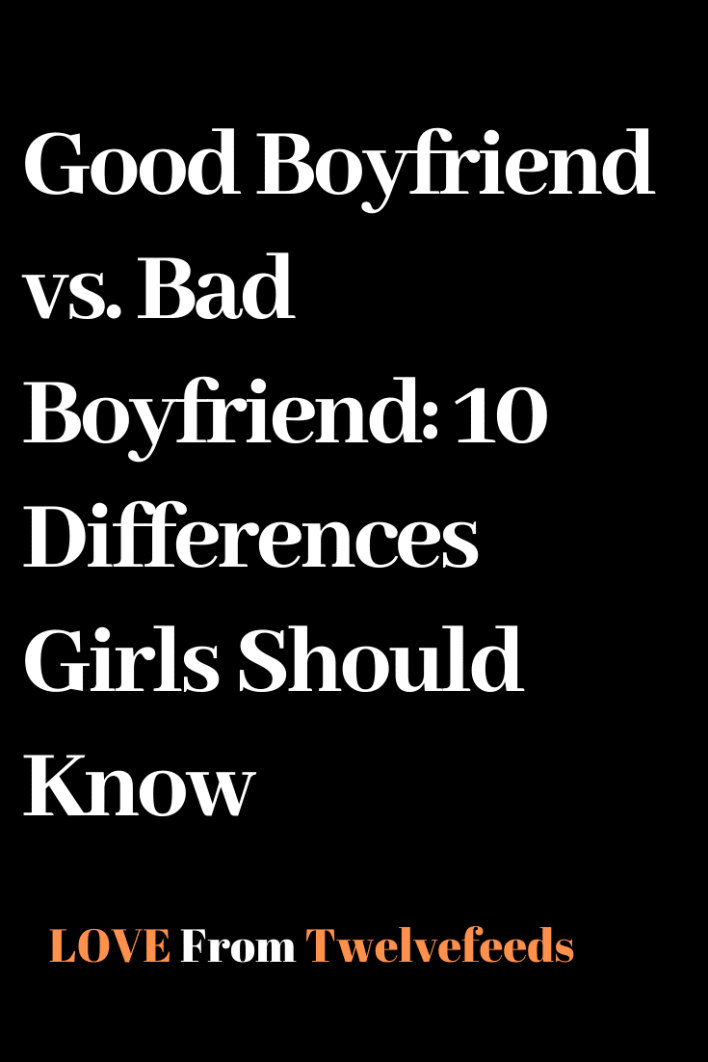 No relationship is perfect, that is a fact. Every relationship has its ups and downs, every person you will meet will have their own flaws. Every boyfriend that you will have will come with their own shortcomings but you will love him anyway. But when or where do we draw the line? To what extent do we tolerate mistakes?

Sometimes, a woman can be so full of love that she would be blinded by her partner’s good looks, charm, or promises. Then how does one determine between a good boyfriend and a bad boyfriend? Read down below to know the 10 differences every girl should know:

1. A good boyfriend knows your value; A bad boyfriend makes you feel worthless.
A good boyfriend knows how to value his girlfriend. He has respect for one’s time. It is understandable that people can be late because of unforeseen circumstances but when he is obviously making up excuses for his tardiness, then that is a red flag right there.

A good boyfriend knows how to manage his time. If that person is important to you, there is always time, the tricky part is how you manage it. There is no such thing as “too busy”.

A good boyfriend also knows how to balance between friends and his girlfriend. If he goes hanging out with his clique that he doesn’t have time for you anymore, then that is another flag right there for being a bad boyfriend.

A good boyfriend will never want to make you feel uncomfortable or harm you in any way. He will never encourage you to do any vices. He will always look out for you.

4. A good boyfriend is accepting; A bad boyfriend is not.
A good boyfriend accepts you for you who are. We are not perfect, each person has their own flaws, but instead of highlighting those flaws, a good boyfriend helps you overcome them. He doesn’t pressure you to change instead he only encourages change when you think that it would benefit yourself.

He appreciates and loves all your quirks and even in the moments when you’re annoying him, he accepts that too and sees it as something that makes you, you.

5. A good boyfriend is forgiving; A bad boyfriend is vengeful.
We all make mistakes, it is part of being human but a bad boyfriend will have a hard time forgiving you for the littlest things, for example, you forgot to call him back or text him as soon as you get home. If he snaps at you even after you apologized, that’s not a good sign.

In relationships, being forgiving is a virtue. Of course, there’s a limit on how forgiving we should be, but for small mistakes such as forgetting to attend his basketball practice, being forgiving goes a long way.

You will immediately know it if you have a bad boyfriend because your family is also a good source of judgement. They will see him differently from you. A good boyfriend goes all out to make your family feel that he can be trusted and there is no reason for them to worry about their daughter’s future.

Having someone to talk with and laugh with is important in a relationship, something you will never achieve with a bad boyfriend who does nothing but hurt you and make you cry.

8. A good boyfriend knows how to cherish you; A bad boyfriend is unfeeling.
Being materialistic in a relationship is never a good sign. A relationship built on materialistic things will never last, it’s just one of the laws of nature. A good boyfriend does not only know how to cherish you, he also does by doing simple things like calling you to say good morning, helping you out with chores, making coffee for you, or giving you a head massage when you’re stressed.

A bad boyfriend is unfeeling. He is emotionally and physically unavailable. He may fill that hole by showering you with chocolates or teddy bears, but that will never be enough.

9. A good boyfriend always has your back; A bad boyfriend is never there.
A committed relationship is two people going through thick and thin. A good boyfriend will always be there for you no matter what. If you fail your entrance exam to medical school, he will be there to wrap you in his arms and comfort you. Whenever you accidentally forget to bring important documents, he will go the extra mile to get it for you.

On the other hand, a bad boyfriend is rarely there for moments when you need him. And when he is there, he fails to connect with you and what you’re going through.

A good boyfriend will never do that, if he respects you and cherishes you, he will never fail to make it clear to you how much he loves you.

A relationship is a two-way street. A successful relationship always has the three C’s: communication, compromise, and commitment. Being a good or bad boyfriend is not a black and white thing, at the most it has its grey areas, and it now depends on you to determine which end of the spectrum your boyfriend is leaning to.

6 Effective Ways to Make Him Love You More

12 Ways to Revive a Dying Relationship