There’s nothing worse than a guy who loses interest in you. Did you really like him? Sure… maybe. I mean, even if you don’t like him, you can feel your ego being slowly squeezed. What makes it even worse, is that when you see him distancing himself from you, then you try harder. We’ve all been there. I’m actually an expert at doing this, especially in my early twenties.

When I would see a guy losing interest in me, I would try even harder, be more attentive, message them more, and hang on for dear life. That usually makes them run away from you even faster. I know what you’re thinking, and yes, this is my gift. But you don’t have to go through this. In fact, you can be the one to pull out before him.

How to know when he doesn’t like you anymore

Trust me, you don’t have to wait to be dumped. In fact, that’s one of the most humiliating things that you can do… wait around for a guy to end it with you. But sometimes it can be difficult to know if he doesn’t like you anymore. Here are some clear signs.

#1 He doesn’t reply to your texts. Classic sign that he doesn’t like you anymore. Okay, sure, maybe he’s working or has a football game. But if he isn’t replying to your texts for a couple of days, that’s not because his battery isn’t working.

I’ve had a couple guys try to ghost me via this method. The best thing you can do is stop texting him because you’re going to look desperate.

#2 Or, if he does, it’s one-worded replies. Or maybe he does reply to you because he feels somewhat guilty. He’s still an asshole, though, so don’t look at this with some hope. If he replies with “k,” “lol,” “yes,” or “no,” it’s best that you just put your phone down or open your Tinder account. Get someone new – someone fresh.

#3 He’s M.I.A. You were supposed to go for a movie last Friday, but he never messaged you. He was supposed to come over for cookies, but he didn’t show up either – he said he slept through his alarm. His alarm didn’t go off, or did his phone run out of battery? No. He’s trying to ghost you.

In fact, he’s probably happy there’s another guy, that way, he doesn’t have to man up and tell you he’s not interested in you.

#6 He doesn’t update you. When you have a relationship with someone, it’s normal to tell them about your day and what happened. However, if he stops telling you about his day and the updates going on in his life, you’re becoming less of an important figure in his life. I know it’s hard to accept, but that’s just the case.

#7 He spends more time on the phone when around you. If someone really finds you interesting, they’re not going to be spending time on their phone while around you.

If anything, their phone is tucked away in their pocket, and they’re fully invested in your time together. But if he’s swiping on Tinder and messaging his grandma, well, there ya go.

#9 He spends more and more time away from you. You used to hang out every Friday night watching movies at your house, but now he goes out with his other friends.

If he really wanted to spend time with you, he wouldn’t give up those moments with you. But he did, because he’s looking for someone else. 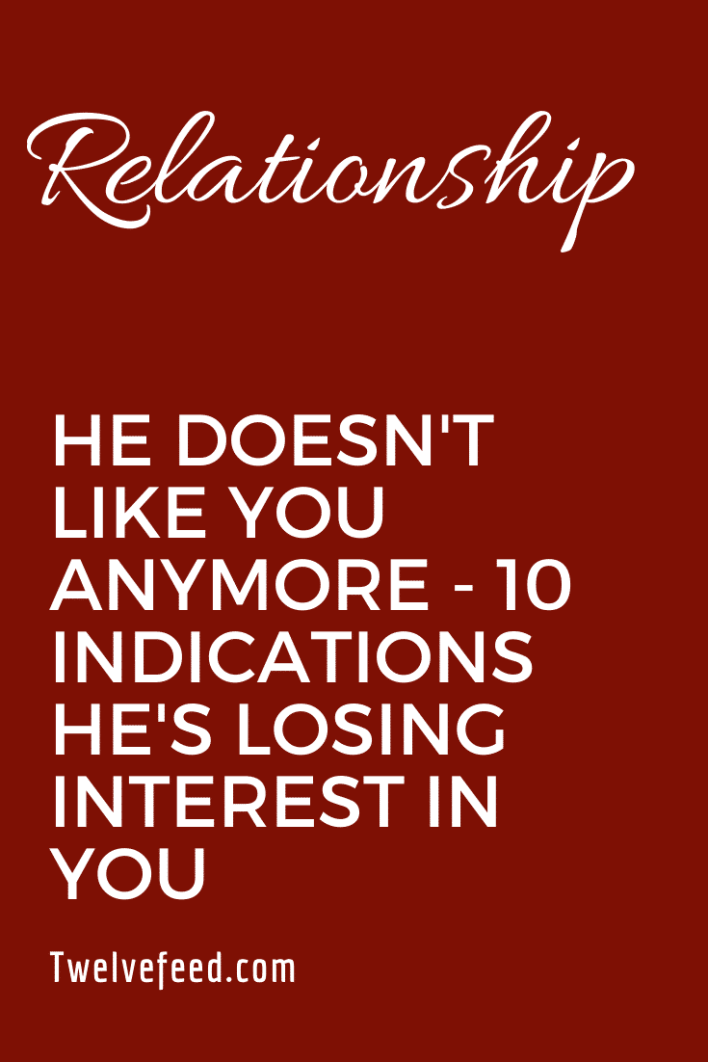