I was out with one of my friends recently, and she talked about some other woman and referred to her as one of those helicopter parents. Of course, being the stellar and totally on top of my kid parent that I am, I looked at her bewildered. I couldn’t imagine what a helicopter mom was until she defined it for me, and it was spot on.

Helicopter parents hover over their child, watching their every move, snooping on their most intimate conversations, and in everyone’s business, which includes every other kid who is in their kid’s life.

I don’t know if helicopter parents end up with better-behaved children, but what I will tell you, is that as a mom, they are no fun to deal with. They treat their children as if they are nothing but an extension of themselves and never give their kids allowance to make a mistake.

30 signs you deal with helicopter parents

Catching kids before they fall might be great if you talk about diving over the Grand Canyon lookout. But, if kids never fail or fall on their ass, they never learn boundaries, self-control, or how to gauge their own behavior.

So, if you are a helicopter parent who feels like you are on moral high-ground because you are so on top of your kids they can’t ever climb out of your controlling hole, guess what? Someday my kids, who aren’t being helicoptered, will be more well-adjusted, stable, and know how to handle their own shit without calling mommy.

It isn’t that I don’t care, it is just that I care enough to allow them to learn lessons while watching on the sidelines to help before they drown, not making sure they never learn to swim.

#1 They do their child’s homework. Homework is designed to give your children extra practice on their OWN. Helicopter parents don’t think that their kids should ever fly solo!

#2 They have all sorts of spying apps and read through their kids’ messages. I know my friends tell me I should watch my kids’ social media accounts, but the thing is, I trust them and talk to them about what is right and what isn’t, as well as what is dangerous. At some point, you need to have some faith that you raised your kids well enough to “get it.”

#3 Their kids aren’t ever at fault. I blame my children first, ask questions later!

#4 No one better dare reprimand their child. Go ahead and yell at my children. In fact, I encourage it. If they aren’t super fearful of me… it takes a village, right?

#5 They have no life of their own. Helicopter parents don’t go out, have friends, or really any lives of their own. They live vicariously through their children. Sounds fun, huh?

#6 Their job is pure promotion. They literally don’t have enough good things to say about their kids. I am not sure if they try to convince everyone around them that their kid is great or themselves. Either way, I let my kid’s behavior speak for itself.

#7 Everything they never achieved they make sure their kids do. All those failed dreams aren’t going to die with the helicopter parents, their kids are their second chance at greatness.

#8 Highly emotional if their kids get hurt, they fight their battles for them. In our home, you don’t come to me unless you are bleeding or bones are sticking through the skin. You learn to fight your own battles because I am not always going to be around to do so.

#9 They take everything way too seriously. So, your kid says “shit” for the first time, get over it!

#10 Everything is bullying, everything. If someone says they don’t like their child’s shoes, it involves a call to the school to put a stop to the bullying.

#11 They look down at any parent who isn’t “involved” enough. A helicopter parent thinks they care more because they smother more. Not the case… sorry.

#12 They give their child no privacy and cross the line way too often. They have no problem reading intimate conversations that weren’t meant for them while their children have no clue. In my book, if you want to find out what is going on with your child, how about you just ask them and trust they are honest people?

#13 Their children don’t have a clue how to wipe their own ass. Helicopter parents make breakfast, lunch, dinner, and every snack in between. How on earth will any adult raised by them do for themselves?

#14 Their children can’t ever do anything right. If it isn’t perfect, try, try, try, try again. And then… it still won’t be perfect ENOUGH.

#15 They are the ones in the front row every time, looking down their nose at the back row. Yep, a helicopter parent isn’t just there an hour before performance time, they already emailed the teacher to find out which side they need to sit on to get the best video shot. 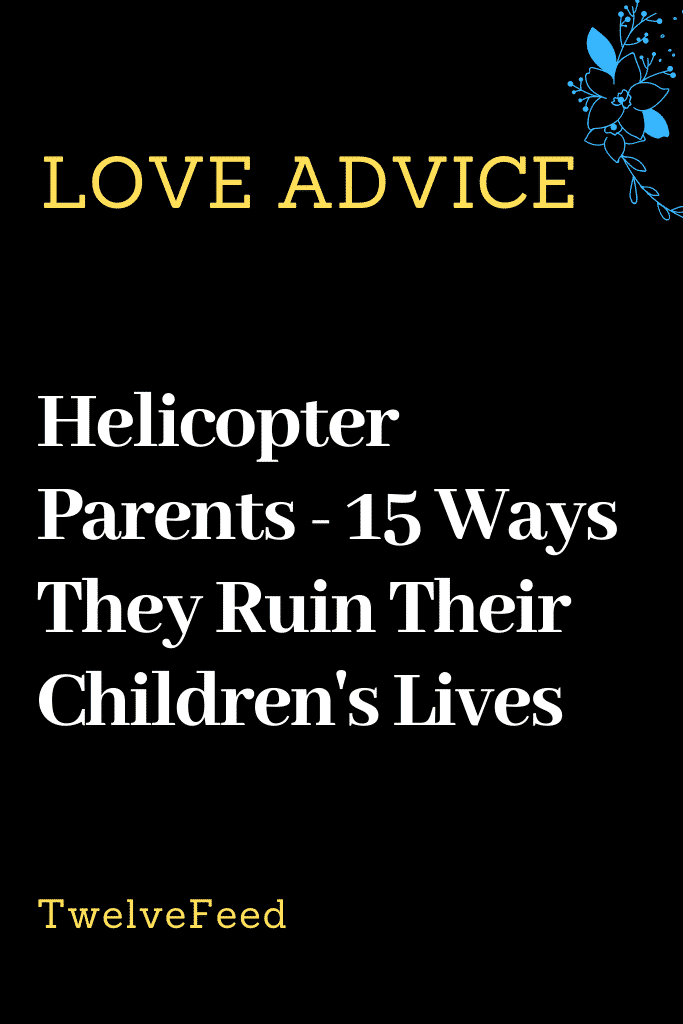 These 2022 Will Be The Worst Year For Zodiac Signs