Sure, it sounds cliché, but unless you were born in Transylvania and are Dracula’s illegitimate daughter, does anybody really like all that blood? See, here’s the thing about blood: It’s supposed to stay inside your body. Once it starts coming outside of your body, that’s a sign of trouble. The life is pouring out of you—not good. It would be much better if every month your body just spontaneously shed some fat. But keep the blood inside. It’s gross when it pours out of you like that.

There isn’t a girl on Earth who can quite convince herself to enjoy feeling like one of those giant inflatable Macy’s Day Parade balloons. Who wants to feel so bloated that it’s too much effort to turn around and look in the mirror to see if your ass looks fat? And does anybody really like to waddle? If guys want to “get swole,” that’s their business. But we ladies could really do without all the swelling, thank you very much. All that blood is bad enough already.

After gobbling down a half-dozen glazed donuts, what girl in her right mind wouldn’t wash it all down with a half-gallon of chocolate milk? That’s the only way to get the proper enzymes into your system that will allow you to digest the half-pizza you ate an hour ago and the half-pound of freshly ground almond butter you ate right out of the jar with your hands. The trick is to eat only half of everything.

Nothing quite makes a girl want to cry in her martini like walking around feeling that two explosives are strapped to her chest. If there were any justice in this society at all, it would give all adult women a week off every month just to stick her boobs in a tub of ice while eating an array of fine chocolates.

There you were, sitting in the bank applying for a car loan when the floodgates opened. According to the calendar, Aunt Flo wasn’t supposed to arrive until two days from now. But here she is and there you are, sitting in the loan officer’s room and feeling like there’s suddenly been a ten-car pileup between your legs. Don’t get me wrong—life holds many good surprises. But except for being stabbed in a dark alley, this is the worst kind of surprise.

When your panties and your sheets and your T-shirts and your sweatpants and your bath towels and even your favorite evening dress all look like they got involved in a violent spaghetti dinner, that’s when a smart girl starts seriously considering investing in all-maroon clothes, linens, and upholstery.

Yes, of course your white disco pants are adorable, as are the sheer white panties that lovingly cup your buttocks. What isn’t so adorable is getting your period on the dance floor and realizing you’d probably have to walk ten city blocks just to find a bodega to buy a spark plug to stop the flow. If we lived in a truly woman-friendly world, there’d be a little glass box on every street corner that you could break open with a little pink hammer to fetch a tampon during crises such as this.

We all poop—it’s even the title of an unreasonably popular children’s book. But we never poop as much as we do during our period. It’s like, you didn’t eat nearly enough food to poop that much, so where is all this poop coming from? The answer is easy—it’s coming straight from the Devil. It’s a little joke he plays on you every month.

Once a month it’s like a Giant Invisible Stapler descends from the clouds and put a big steel staple right between your hips. Or maybe it’s more like your crotch is being pinched in the claw of a twelve-foot lobster. Or like a giant cannon is shooting bowling balls at your abdomen. No wonder you feel like screaming, but please remember that you’re in church and that might not be such a great idea.

S+x is supposed to be an intimate and tender moment wherein two loving adults share one another’s bodies, preferably over wine and candles. It’s not supposed to look like an outtake from a slasher movie or one of the JAWS sequels. There are already enough bodily fluids involved in s+x; all that blood just seems like overkill. Nothing ruins the mood like suddenly feeling you need to be rushed to the hospital. 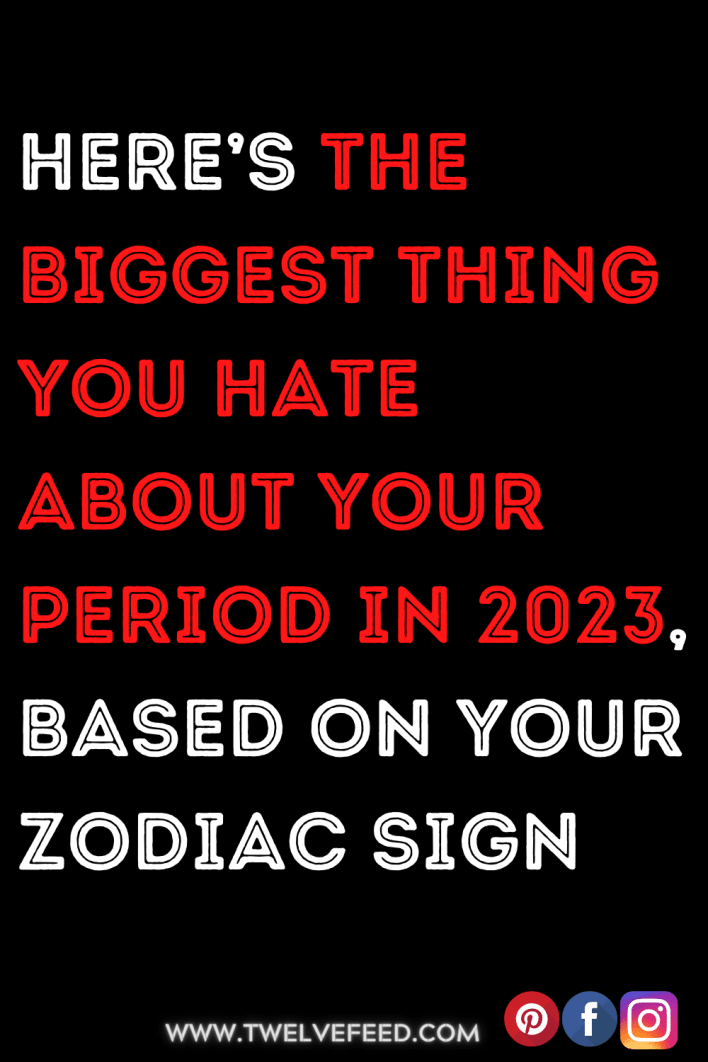 The 4 Zodiac Signs That Need To Reevaluate Their  Standards

The Worst Way Each Zodiac Tries (And Fails) To Flirt