Growing up, I was always the hopeless romantic who found herself constantly lost in a daydream. I was fascinated with the idea of being in love. Perhaps because I spent a great deal of my growing up years watching Disney movies. As I grew older, I found myself trapped in an ideal I made for myself. And that made it hard for me to see reality.

As much as I was in love with the concept of being in love, I realized how terrified I was of love. I remember my first crush on my classmate way back in kindergarten. It was a hopeless crush, doomed from the start because I was the quiet kid who rather would read a book during recess.

I remember only telling one friend, who also happened to be my seatmate. Before I knew it, everyone knew about my little crush, even my teacher. From then on, I became terrified of relationships.

Falling in love is a frightening place to be

When it came to relationships, the years were tough on me. But I was stubborn, as I had always been. I found myself refusing to give up on this ideal I held since I was just a child. Hopeless romantics, as I learned, find themselves struggling in today’s heartless hook-up culture. Everything comes so easy, even s*x. I was but a lost soul struggling to find my place in the world.

Being a hopeless romantic in a culture obsessed with hookups

What are the struggles of a hopeless romantic in today’s culture? Well, there are definitely quite a few.

#1 You constantly find yourself dating the wrong person. Remember the person introduced to you a few weeks ago? You initially found them to be very attractive, but he turned out to be a total jerk. As a hopeless romantic, finding love seems to be your ideal goal.

#2 Love is never like the movies. I grew up watching Disney movies. Perhaps one big mistake every hopeless romantic makes early in life. But hopeless romantics always hold some sort of an ideal, a dream to strive towards. Early on in life, I wanted my romance to be like the Disney movies, or even one of those cheesy romantic flicks that were a guilty pleasure of mine.

#3 Love becomes too much of an ideal and less of a reality. One of the most frustrating things about being a hopeless romantic is once you fall into a relationship, your ideals die altogether. While you tend to romanticize the situation you are in, you are blinded to the harsher truths of the relationship.

#4 They dread the thought of dating. The dating game is a hard game to play especially when you find yourself to be a hopeless romantic. These days, the rules of dating changed so much that it confuses me even to this day. What happens when the person you date turns hot and then cold suddenly, or disappears after just one date?

These days, more people want a no-strings-attached relationship than pursue a serious commitment. This conflicts with the hopeless romantic’s ideals who are all about serious relationships and commitment.

The modern dating world is harsh, and too often the hopeless romantic finds themselves to be an old soul in an ever-changing world.

#5 You feel you have so much love to give that it scares you. When hopeless romantics find themselves in a relationship, they’re the more affectionate one in the relationship.

#10 Hopeless romantics refuse to give up on love. If there is one thing that drives hopeless romantics to stand up and try again, it is the concept and the ideal of finding genuine and lasting love. 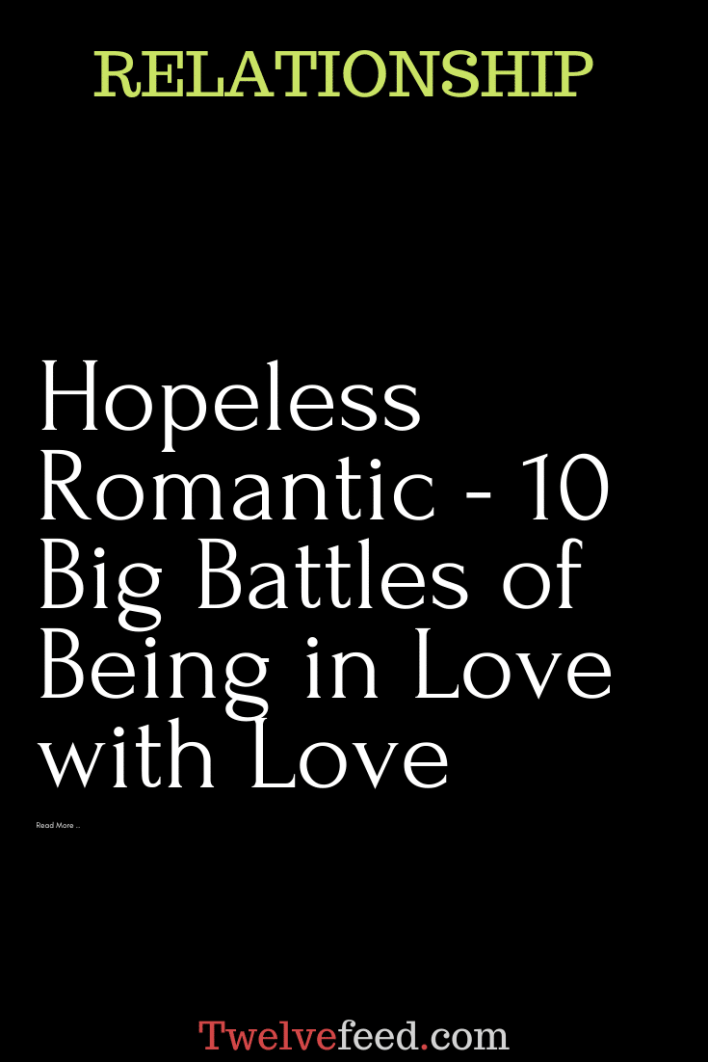 Fundamental White Lady - 20 Stereotyped Indicators You Simply Can Not Forget