Flowers and cards can say, “I’m sorry” but alone, they just don’t cut it when you are trying to give a sincere apology to the person you love.

When we honestly apologize to someone, it is because we want forgiveness.

We want to be let off the hook for whatever wrongdoing we’ve done, or hurt we’ve caused.

And you can’t always receive the forgiveness you seek when you simply flop down a bouquet with a generic thank-you card.

Apologies take effort, and you should take the time to formulate a genuine apology with the following eight steps.

The 8 essential steps of apologizing to a lover

#1 Find out what exactly happened. Don’t guess what the issue is, ask your boyfriend/girlfriend or spouse to clearly tell you what you said or did to hurt them.

#2 If you are at fault in the situation, then you should take responsibility for your actions.

Placing the blame elsewhere is immature and will set you back further, possibly risking your relationship.

#4 Say sorry sincerely. If you’re not genuine, the apology will definitely fail and you will be back to square one. [Read: Relationship arguments – The 23 dos and don’ts you always have to remember]

#5 Be grateful and thank the person for listening to you. Depending on what you’ve done, that could be more difficult than you understand.

#6 Don’t assume you will be excused, and instead ask for forgiveness.

#7 Remember to be patient. Sometimes, accepting an apology can take time, and your partner needs space to think about what comes next.

#8 Follow through on your word. If, in your apology, you agree to do something, or stop doing something, make sure you honor those promises.

Now, while these are the fundamental steps to creating a meaningful apology, you also need to take into consideration the differing degrees of an apology.

While a modest sorry might be acceptable if you forgot to call, that won’t fly if you’ve done something severely untrustworthy like break an important vow.

Depending on the amount of hurt you’ve caused, and the nature of the situation, you can apply the eight essential steps of apologizing to one of these three different degrees of apologies. [Read: The power of your words and how it can make or break your relationship]

The 3 differing degrees of apologies

The first degree of apology is for those small things that we could just let pass by without any apology at all.

But, if you truly love your partner, you will want to acknowledge even the smallest wrongdoing, and give a short but sweet apology to let them know you care. Your partner will be thankful that you are concerned with all of their wants and needs, and have taken the time to address why they are upset.

For example, my boyfriend’s work involves being contracted out to many different fundraising, and promotion events, that often run late into the night. I attend many of these events, but when I don’t, I simply ask him to send me a quick message so I know approximately what time he will be home.

If I don’t get a text, I wake up well into the night freaked out, worrying that something bad has happened. My anxiety is probably the result of losing too many people to road accidents, but it is still something I need his help with soothing, when he is going to be working late.

One night he forgot to text me, and I sat up until 3:30 am trying to contact him. His phone died, and he didn’t think to send a message from a friend’s phone. I was upset, all I needed was a quick update so I didn’t need to worry.

When he got home and I confronted him about the situation. He was defensive at first, and didn’t seem to think he had done anything wrong. After I explained where my anxiety came from, he offered the perfect simple apology.

He kissed my forehead, hugged me and said, “I’m sorry that I worried you. Next time if my battery dies I will borrow someone’s phone and let you know.”

Short and simple, and yet effective. If he had chosen to shrug it off instead of apologizing, I most likely would have harbored secret resentment over that. It was something little, yes, but it still mattered to me. [Read: 16 silly bad habits of yours that can ruin your relationship]

No one is perfect, and sometimes, even the most organized person can forget an important date, event, or responsibility.

I’m not a freak over birthdays but a nice good morning birthday kiss, and tea in bed would be nice. But this year, my boyfriend forgot, and all I got was a rushed goodbye kiss, and no mention to expect anything fun later that day.

Thanks to social media, my boyfriend realized his blunder mid-day and called me, and he promised to make it up to me. He organized a nice gesture apology in the form of a dozen heart balloons *I’m not really one for roses*, and a delicious birthday cake. [Read: 25 simple and really sweet romantic gestures for everyday life]

A good gesture apology doesn’t need to be too big, but it can’t be too small either. It should be just enough to let your partner know you are truly sorry.

The third degree of apology is for those of us that have really messed something up big time. This apology isn’t for forgetting to call, or mixing up a birthday. It is in response to something that could cause serious relationship turmoil.

The wholehearted apology is somewhat less concerned with what you do, or what gifts you bear, and more about what you say, and how you follow up.

Imagine you have done something you cannot take back, and many consider a deal breaker – you’ve cheated on your partner. [Read: How to get over big trust issues in your relationship]

No amounts of flowers or chocolates are going to offer your partner the apology they need if monogamy was something you promised each other in your relationship.

The wholehearted apology thus should begin with some deep reflection on why you are in this situation in the first place, and where to go next. Even if you’ve done something so big that it might mean the end of your relationship, you still need to offer a well thought-out, wholehearted apology.

You need to think of exactly what it is that you want to say, and how you want to say it. You need to be honest, and insightful. Don’t say things that are typical, and what your partner is expecting. Say the truth, even if it sucks. [Read: 18 critical signs of an unhealthy relationship]

Wholehearted apologies are the hardest, because sometimes, you won’t be forgiven. The best that you can do is to offer your sincere regret, uphold the promises you made after the apology, and try to learn from your mistakes.

While these essential steps, and different degrees of “I’m sorry” can help you out if you’ve made a mistake in love and need to apologize, they are not fail proof.

Not all things can be forgiven. If you’ve done something truly menacing or cruel that could likely have a lasting impact on a relationship, regardless if an apology is given or not, forgiveness might be hard to come by.

It’s best to steer clear of such a situation from the beginning, and instead be honest and trustworthy throughout your relationship. Then you won’t need to do so much apologizing. 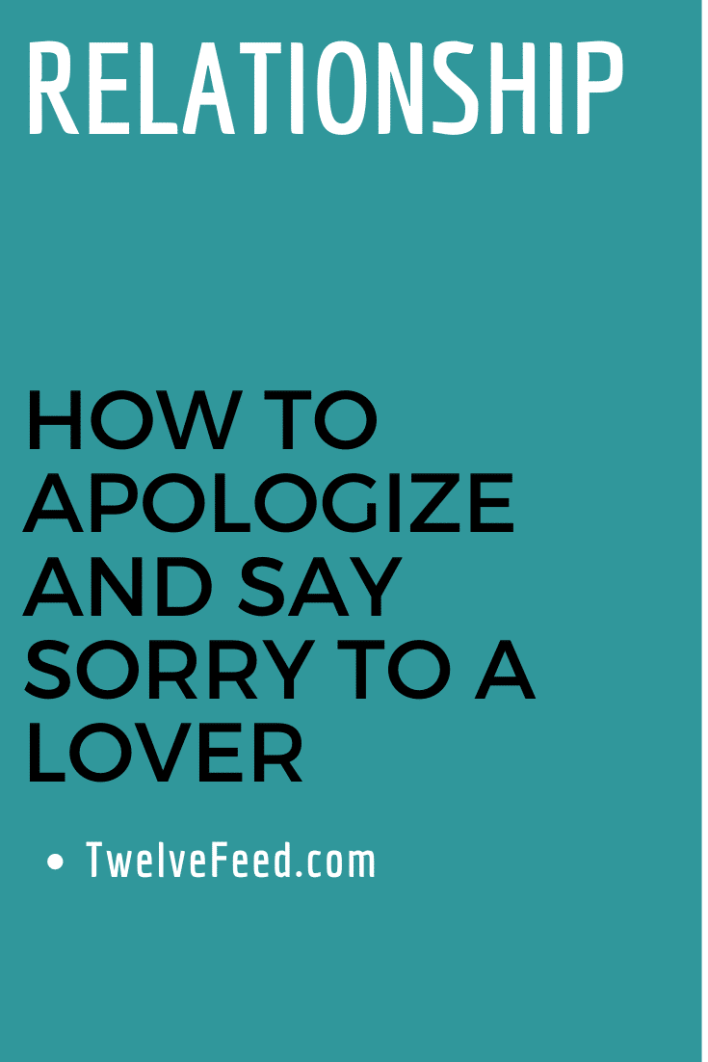 The 3 Stages to Embrace and Overcome Loneliness