It’s true that men aren’t as good at communicating as women. So it should be no surprise that communicating via text message is challenging. If you’re having a hard time understanding the texts your crush sends you, don’t worry. You don’t need to be a cryptologist to figure out what’s on his mind.

If you’ve recently started talking to a guy you have a crush on, you probably have also noticed how often you’ve been using your little fingers to rapidly type out text after text. Sure, you two may talk to each other on the phone or even meet up, but chances are, you’ve been texting each other way more.

But when you find yourself starting to constantly analyze every text message from your crush, you will find yourself feeling like a crazy person who’s obsessed with his latest reply. It’s time to stop feeling crazy, and time to start understanding what those typed out words really mean.

What do guys mean when they’re texting you?

Back in the day of phone calls, it was easier to decipher what a guy is saying based on what he says and the way he says it. These days, all you have to work with are a bunch of words and emojis on a screen. Here’s the real deal on what he’s actually trying to say.

#1 One-word answers. If you send a long paragraph-type text, only to receive a very short one-word reply back, don’t panic. This does not necessarily mean your crush isn’t into you. Some guys just don’t like texting. If he sends a one-word reply, it can mean he’s busy, or maybe he doesn’t feel like texting at the moment, or it could even be both. Try again at a later time, and see how it goes.

If he’s consistent with his monosyllabic responses, he’s probably not into you, and doesn’t know how to tell you. He’s just being polite by responding. If you’re the one to always initiate the conversation, and he has never sent out anything longer than the average Tweet, then he’s probably trying to hint at the fact that he’s not interested in you.

Just remember, he might end up saving what you sent him. Ask yourself if you’re okay with your crush having a sexy photo or video of you on his phone. You don’t really want to end up with a sex tape like Paris Hilton or Kim Kardashian, do you?

#3 “Good morning” and “good night” texts. It’s nice to wake up in the morning to see your crush has texted you “good morning!” If you are receiving messages from him first thing when you wake up or right before you go to bed, it’s safe to say your crush has a crush on you as well. It means you are the first thing on his mind when he wakes up, and last thing on his mind before he goes to sleep.

#4 White noise. If all you ever hear is white noise, take this as a huge hint that he doesn’t like you. If you’re not getting any replies back, stop texting him immediately. Seriously.

By not replying to your text messages, the only crushing that is happening, is the crushing blow to your heart and ego. Besides, why would you want to text someone who doesn’t even bother to reply? If a guy is really into you, he’ll text you back. Even if he’s busy or not into texting or can’t operate a mobile phone for the life of him, he will definitely find some way of contacting you if he likes you.

#5 “Sorry, can’t make it” texts. Life happens, and it can get in the way of plans. If your crush sends you a last-minute text bailing on the plans you two had, giving no explanation may be annoying, but it’s also not the end of the world. This situation can mean a couple of things.

Not offering an explanation means either he’s too busy to explain why. Perhaps whatever came up is very personal, and he’s not ready to tell you about it, or it means he let his nerves get the best of him, so he bailed.

Don’t assume the worst has happened. If he cancels on you last minute, wait and see if he initiates rescheduling another time to hang out. If he reaches out to reschedule, that’s wonderful. If not, take the silence as a hint. When a guy wants to see you, he will.

Something about the wink face makes you feel all giddy inside. If your crush sends you the wink face, he’s definitely flirting with you. He wants you know he’s crushing just as hard on you as you are on him.

#7 “LOL.” If your crush replies “LOL” to everything you text him, I assure you he’s not actually laughing out loud every single time. You may very well be a funny, witty text messaging machine, and there are probably times when he does actually laugh out loud. But every time is not one of them.

For example, if you send a long, somewhat serious text message, only to get a reply of “LOL,” then it’s time to figure out what the heck is going on. If he’s always replying the same thing, this means he’s just replying for the sake of replying, or it means he’s not taking the time to even read the messages you’re sending, or it means he’s an idiot.

If he’s not actually trying to engage in the conversation with you, take the hint. Then you will be the one doing all the LOLs when you laugh at the fact you ever had a crush on this dude in the first place.

A final note on decrypting his texts

Having a crush on a guy is exciting and exhausting. It leaves you feeling giddy and excited, with butterflies fluttering in your stomach. It also leaves you constantly wondering what he’s up to, what he’s doing, if he likes you, and everything else in between, taking up all your energy.

When you have a crush on a guy, you want to be in contact with him all the time. You want to feel like you’re a part of his life, and you want him to be a part of yours. Which is why being able to text back and forth with your crush and having normal conversations, seems rather simple.

But for some reason, it’s completely the opposite. And because it’s not simple, we find ourselves exasperating all of our energy, staring at the same text messages over and over again, trying to make sense of it. We end up treating his vague, cryptic text messages as if it’s our very own Da Vinci Code just waiting to be solved.

But the reality is, these text messages should be taken for exactly what they are. The most difficult thing to understand is that your crush and his text messages aren’t complicated at all.

Stop overanalyzing all the vague *or seemingly vague* text messages your crush sends you, and start accepting them for exactly what they say! 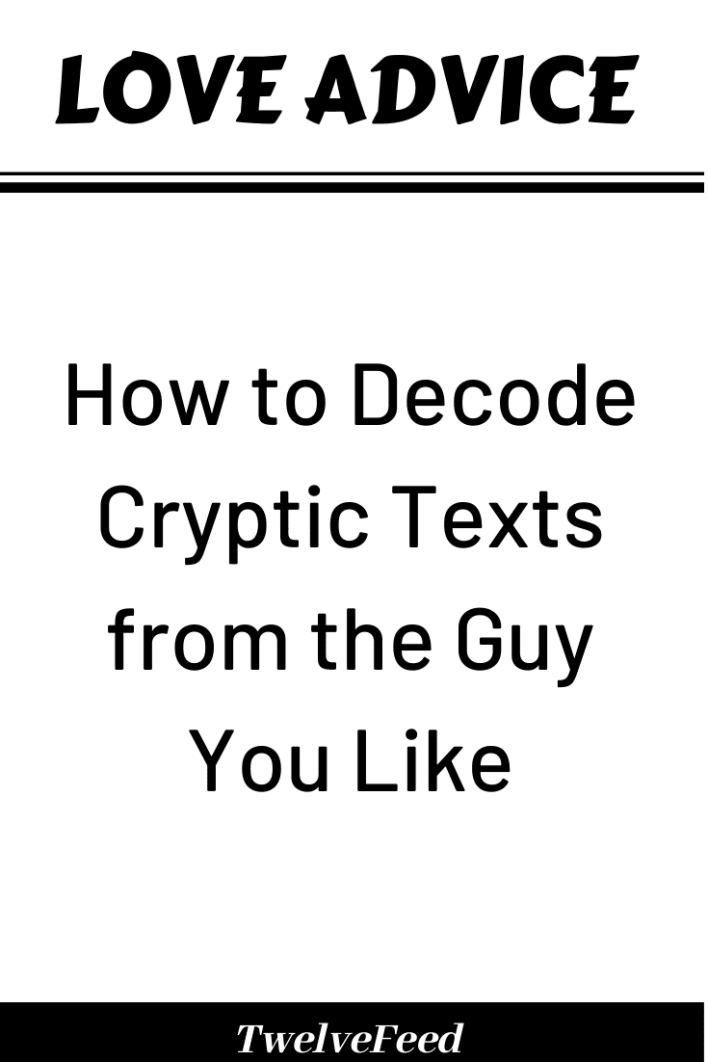 Growing Together if You Started Your Relationship Young