Having fictional character crushes is a rite of passage for many of us. Whether you’re a boy or a girl, you probably had your first one before you reached the age of ten *and you probably have one right now too!*.

The most popular one to date is Christian Grey, preceded by Edward Cullen. And aside from them, there are thousands of others who’ve made millions of girls and guys swoon at the idea of an idea of a person.

Crushing on a fictional character is not a bad thing though. You can’t help but be impressed by an amazing person who may or may not exist for real, regardless of them being vampires or werewolves.

They may seem like the ultimate dream and are way beyond our reach, but the writers and artists who created your crushes probably based their personalities or a combination of it from real people, don’t you think?

So, as crazy as the idea may seem, it’s not too hard to believe that you can find that person in real life. It’d be hard to find someone who’s supernatural, of course, but we’re talking about personalities here, not superpowers.

If you’re looking for that, we might still be able to help you. [Read: 20 fictional ideal personality traits that are based off real life]

Why you’re crushing on a fictional character

Even though it’s just a passing phase for many, there are those who have fallen completely in love with their fictional crushes.

It might seem funny to most people, but having a serious crush on someone who doesn’t exist is perfectly normal. Why do you think so many people are head over heels for their celebrity crushes? Their personas aren’t even real, most of the time.

The most basic reason why you’re crushing hard on a fictional character is because they embody the traits you hope your future partner might have.

Obviously, the first thing people notice is a character’s appearance. Written or not, when an author portrays their character as the most attractive person on the planet, you see it as truth.

Money is a deciding factor for crushes as well. See dashing billionaire, vampire with a cache of hidden investments and celebrities who have high talent fees, and you know what I’m talking about.

Other than that, their charm can be a huge motivator too. Whether they are rich or not isn’t even an issue. Even their morals aren’t that big of a deal. See Draco Malfoy, Christian Grey and Loki.

With faces like those, who wouldn’t? But the main thing is that these people are just pieces of a bigger puzzle that is the world.

With or without superpowers, they are all working with the same things we are on a daily basis. They embody attraction, power, charisma and attitude – all of which you can find in the boy who might be sitting next to you. [Read: 12 Prince Charming traits that make all girls swoon]

Fictional characters you like and what it means in real life

It all depends on what you see in your current fictional crush. Are you attracted to their appearance? Their personality? Their money? Their Chitauri Scepter?

Whatever it is that gives you butterflies in your stomach, we have the answer to your search for this elusive being in real life.

Whether they were born rich or not, this type of motivator is fleeting. What you’re really looking for is a man who can give you financial stability. Look for a guy who has the potential to provide a good life for you. If you feel that you deserve an extravagant way of life, it’s not a man’s job to do that for you. It’s yours.

If you are easily impressed by men who can stop bullets with their pecs or fly you to the moon and back *hopefully, in a space suit*, you are probably attracted to the idea of a man’s strength. You want to be protected and cared for. A man like that is easy to find. He’s the guy who would do anything for you and care for you whenever you need him. If anything else, caring more about you than he does himself is the best superpower. [Read: 25 signs and qualities that make for a great real life boyfriend]

If you look at most people’s fictional crushes, you will see that most of them have the ability to melt you right on the spot. This superpower is called sex appeal. If a guy is confident enough to pull it off, you can have your own boy next door with a mischievous glint in his eye.

Confidence is the key to having that sort of effect on women. You can easily find a guy like that because you can feel his intensity when he looks at you with want and need. [Read: 10 really easy ways to increase your sex appeal in no time]

If you can’t get over how your fictional crush looks, then you are in for a treat. You are most likely attracted to their overall physique, which is made up of different enticing qualities. It’s almost impossible for you to find a man that looks exactly like a novel graphic or a celebrity, but you can always find one who has the same attractive qualities, albeit in smaller amounts. Just remember, physical appearances don’t amount to much. Having a type is a much better way to go about it.

Seeing or reading about your crush vanquish monsters or put a culprit behind bars can be really hot. It’s the equivalent of a lion killing a gazelle for his mate – and er, other mates – which shows you that you’re simply reacting to a primal need for an alpha male.

This means that you want a man who is dominant and has the necessary qualities that make up an assertive partner. Not only that, you want someone who can protect you and keep the baddies away. To find a man like this in real life, you need to look at how he treats you and how much he values you. Check to see if he’s protective of you, but not in a suffocating way. [Read: 30 characteristics in a man that make him a real alpha]

And the number one requirement? The ability to push your romantic boundaries. Villain or no, fictional crushes are usually those who spout out killer lines and can take you to uncharted places that have fairy mood lighting and bamboo fountain sounds in the background. That is easily remediable in real life.

Just get your partner to book a place at a really cute spa and don’t forget to tell them to amp up the romance once in a while. It never hurts to ask and if they’re not willing to try – even with budget-friendly options – then they may not be your guy. [Read: 25 really romantic ideas to make your date melt!]

But how do you find him?

These are just a few things that make up your fictional character crush. In real life, you’ll have to deal with the good and the bad parts of everyone you meet.

Putting all your attention on a crush who does not exist can be a good distraction until you find the one you’re destined to be with.

If you really want someone who is knowledgeable about the universe your crush lives in, just go to your local fan club or find someone who can relate to you online. *But be extra careful and safe around strangers!*

But until that time comes, it’s okay to dream about someone like your fictional crush. But just don’t let it consume you.

One day, you will find someone who will make all your dreams come true without needing a chiseled jaw and sparkling igneous/sedimentary/metamorphic skin.

[Read: 12 bad girl traits every guy wants to see in his girl] 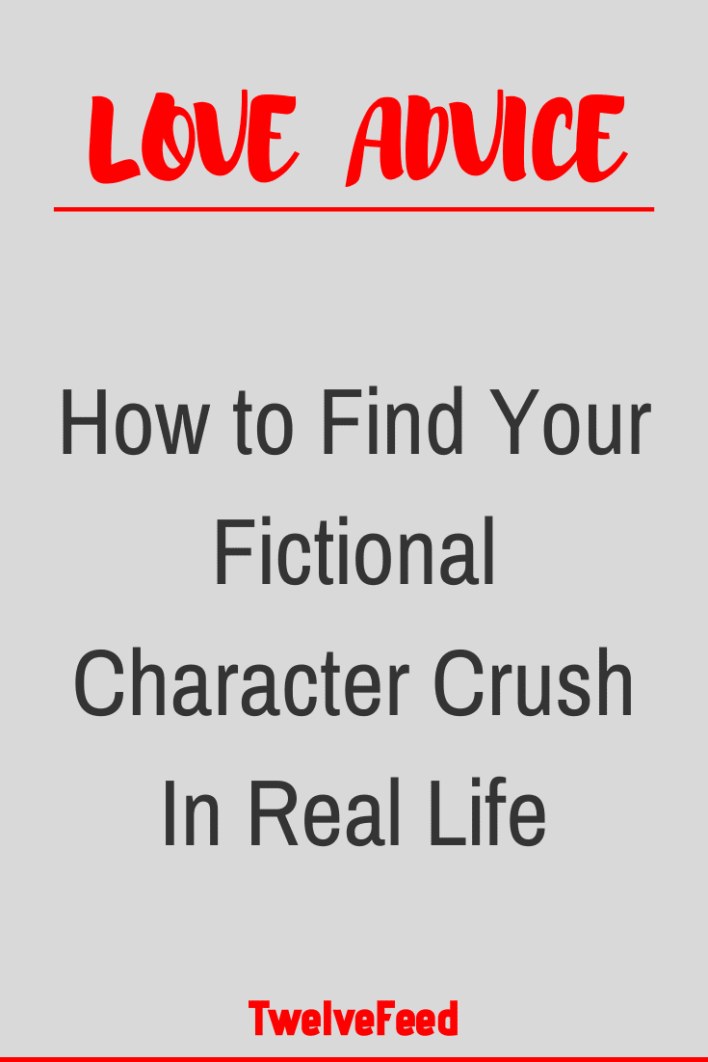 10 Things We Do in Relationships We End Up Regretting

16 Easy Ways To Respect Yourself In a Relationship