There are many ways to ask a guy out.

But to ensure that it works on a guy, you have to remember to never make it obvious that you have a huge crush on him.

Let a guy know that you’re interested in him.

But don’t let him know you need him. Not at least until he starts reciprocating your move.

A guy may want to ask you out, but when he realizes that you like him a lot more than he likes you, he’d start to take it easy just to see what you’d do about it.

And that’s something you should never forget.

How to get a guy to ask you out

There are two things a girl has to do to wow a guy and get him to ask her out.

You have to drop a few signs.

And you have to become desirable in his eyes.

The little signs that matter

Drop a few signs so he starts to look at you as a dating potential.

Sometimes, a guy may assume you’d never be interested in being anything more than friends with him.

To help him see the dating side in you, here are a few tips you could use.

#1 Get your friend to call you both a couple

When you’re having a fun chat with the guy you like, ask a trusted girl friend to join both of you in the conversation. It would be preferable if there are other friends around too. And out of the blue, let your trusted friend comment to no one in particular in the group and say something like, “these two make a cute couple, don’t they?”

It’s an awkward statement, and one that’ll definitely lead to a few laughs around the group. But all said and done, no matter how embarrassed you pretend to be or how he behaves, the thought will still linger in his head.

#2 Using a friend to tease him

Now don’t use all these strategies all the time. Just use a few that you’re comfortable with.

The next time you’re having a conversation with this guy, tell your friend beforehand to butt into the conversation. Ask your friend to tell the guy that it’s so obvious he likes you, and ask him when he’s ever going work up his courage to ask you out?! Of course, she has to make it seem like a joke, and yet, pose it as a serious question.

It’s straightforward and easy, and yet, you didn’t really ask him out yourself. If he does like you, he’ll use this opportunity to ask you out himself.

#3 Invite him to join you

If you’ve made any plans with your friends for the weekend, casually bring the subject up when you’re hanging out with him and invite him to come out with all of you. Tell him it’ll be fun to hang out together and check out a new place. It’s nowhere close to a proposal, but it’s still a step closer to making him like you.

Ask him what he does over the weekend. And when he does tell you what he does on the weekend, fake a happy surprise and tell him you like doing that too! If you’re not sure of his weekend activity, you could just tell him that you’ve always wanted to try that.

This only works if both of you share a few common interests. You obviously can’t stretch a lie here, so be careful when it comes to sharing activities over the weekend.

If he is interested in you, he may invite you to join him on his weekend activity. And who knows, it may just lead to something more romantic.

#5 Let him know your routine

If a guy has to ask you out, he has to miss you now and then. Do you live nearby? Then this would be the perfect way to get to spend more together time with him. During one of your conversations, let him know what you do every evening after work or college, especially if you have a neighborhood café where you like relaxing after the regular 9 to 5, or hit a particular gym every day.

If he lives nearby, there’s a good chance he may have some time on his hands and he may even look forward to spending time with you. If you drop a hint and let him know about your routine, he may even end up bumping into you on a regular basis. And almost all the time, love emerges with more together time, doesn’t it?

#6 Get him to drive you nearby

Stepping out of office to run an errand after work? Try bumping into him on your way out and ask him to come along with you or drive you nearby to help you out. And after finishing up your errand, ask him out for coffee. Insist and tell him it’s the least you can do for helping you out. And once you’re out there on a *date* with him, make him see your good side and be awed by you.

#7 Play the damsel in distress

Ask him for help. This is a trick that always works. Guys just can’t help themselves when a pretty girl asks for a bit of help. Ask him if he can fix your wooden window panels or some other thing you can think of. If he does like you back, he’ll use any excuse to be with you. And after he’s done helping you, thank him with your sweetest smile and reward him with coffee or a homemade lunch.

This is a dirty move, but hey, if it’s a great way to get him into your place, what’s wrong with it, right? When you’re in a conversation with him at the end of the day or when you’re out with him, pretend like you have a terrible headache or use the evergreen stomach cramp excuse.

He’ll ask you if you need help getting home, and of course, you should indulge his request. And once he takes you home, invite him in and change into your cute-n-revealing pj’s and let him see how beautiful you look. Don’t wear anything sexy or he’ll just call your bluff! He can hang out a while and leave after a conversation to give you company.

#9 Let him know you’re looking out

Let him know that you’re looking out and ready for a relationship. Once you’ve warmed him up with lots of together time and happy conversations, if there’s ever a chance of being together, he should know that you’re available for him if he musters the courage to ask you out.

Most of the time, a guy may like you too, but may be scared to pop the question. By dropping a few hints about waiting to meet the one and flaunting your single status at the same time, he may eventually work his courage up to ask you out.

Getting a guy to ask you out

These are all great ways to build more intimacy and create a stronger relationship between both of you. But you have to remember that you also need to constantly create the right sexual tension between the both of you so either of you don’t fall into the dreaded friend zone.

Give these moves a try if you’re trying to figure how to get a guy to ask you out. Almost all the time, this should bring both of you close enough to do the trick. But read how to ask a guy out the classy way for a few more sexy and classy ideas 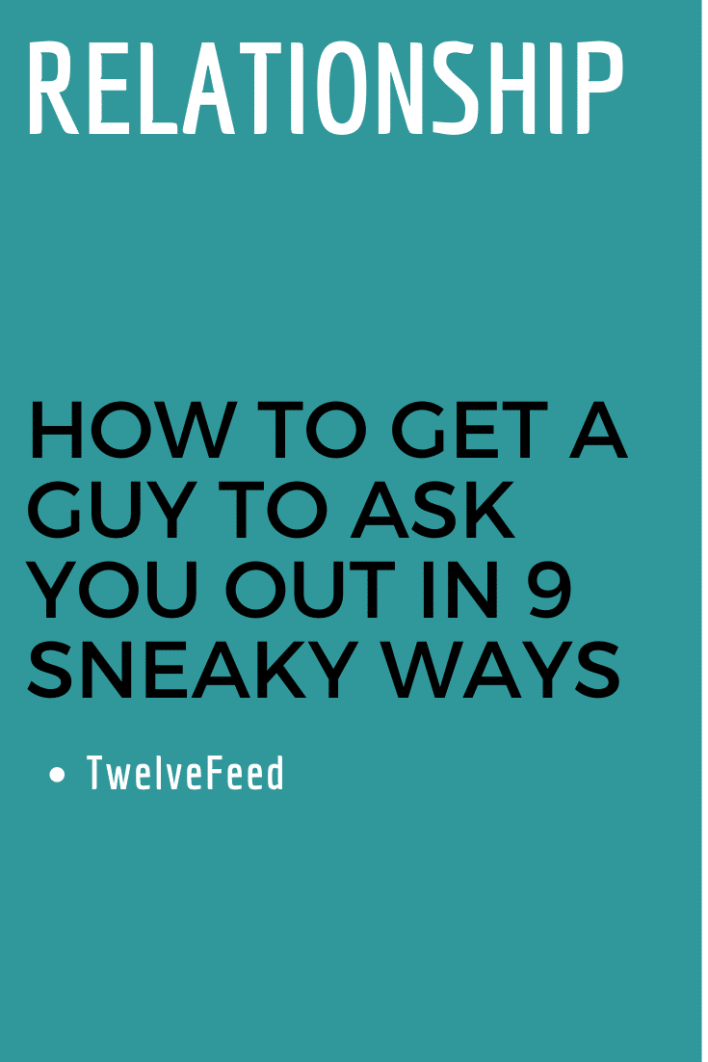 How to React to a Confession without Losing Your Cool