He’s a great guy, and you really like him. The only problem is, he has MAJOR commitment and trust issues. All his previous relationships have ended tragically, and the last one seems to have really ruined it for him.

Maybe she was his first love, but they broke up because they grew up and wanted different things. Maybe she was the woman of his dreams who made their relationship a nightmare by cheating on him. Maybe she was simply a great person, and the fact that things didn’t work out took its toll on him.

All those issues have caused him to be very closed off and afraid of taking your relationship a step further, and it’s breaking your heart because you believe there’s something really special about this guy.

Now this flirtationship or relationship can go two ways: You either give up and bid him good riddance, or see if you can help him get over his past for good, so he can focus on dating you instead. [Read: 13 secret signs you boyfriend’s not over his ex]

How to help a guy get over his ex

Follow the tips below to be the girl who will make him finally get over his ex and look forward to a future with you.

#1 Give it time. Anything worth having is worth waiting for. If you really care about the guy and he just broke up with a girl *even if you’re mad at that girl for hurting him*, allow him time to mourn and be sad about it.

A broken heart, as you may also have experienced yourself, will take time to heal. For some, it may take a very long time. Don’t be too available for him at this time because he may just see you as a rebound—and you wouldn’t like how that would play out. [Read: 15 rebound relationship signs to watch out for]

#2 Be a friend and offer support. First of all, be a good friend to him. It’s normal to feel down and lonely after a breakup, and you should understand that. If you rush head-on into a relationship, it might just backfire on you because of all the issues he has yet to resolve on his own.

For now, it’s best to show him that you care enough to listen to him, and offer your support. This will make him feel valued and see you as the one who was there for him at his lowest. Even if things don’t work out the way you want it to right now because he’s not ready, you’ve already got your foot in the door by being an important person in his life. [Read: Whoa there! 8 signs you’re trying too hard to impress him]

#3 Now, the tricky part: avoiding the friend zone. Once you start spending time with him by going to basketball games together or hanging out while shopping, you know you have his attention. But is it the kind of attention you want?

This is the tricky part: be careful not to be “one of the guys” or you might just be that—his friend. Make an effort to look good, be sexy, exude confidence, and make every other guy notice you. Make him see you as a potential partner by hanging out like friends while also hinting that you’re subtly trying to attract him. [Read: 8 things to do if you’re treated like one of the guys]

#4 Get to know each other. Although you can’t force a relationship on him, this time is ideal for you two to just get to know each other without any pressure. Go out and do the things that you like doing together, and just enjoy each other’s company. Make it fun, light, and give him a breath of fresh air from all the drama that he had to deal with.

As mentioned earlier, it’s crucial for you to subtly make him see you as more than a friend, but don’t try to come on too strong or you’ll scare him away! [Read: The 8 easiest ways to make a guy head over heels crazy about you]

#5 Be careful of triggers. Triggers can come in many ways: the scent of perfume, a movie, a dress, a restaurant. These triggers are reminders of his ex and the times they spent with each other, which may just open up the wounds that you are trying to heal with him. Even if he may be good at hiding it, if he is still raw from the breakup, he will have a harder time moving on if he sees his ex at every turn.

If he mentioned that his ex used to love shopping at Forever 21, avoid passing by this store. If you know his ex’s favorite food is sushi, skip the sushi bar dinners. Encourage him to try new things and to go to places that you know he has never been before with his ex. From here, you can start erasing his memories with his ex and replace it with new ones with you. [Read: 13 oh-so-awesome ways to impress a guy you’re falling for]

#6 Let him experience his newfound freedom. If he was in his last relationship for a very long time, he may want to experience things he wasn’t able to while he was with his ex. This could include nights out with the boys, traveling alone to distant locations, or even spending an entire week at home with his gaming console. Let him be. Be cool and supportive enough to understand that he needs a break and plenty of other diversions.

The last thing he needs right now is someone who will tie him down again after his last relationship didn’t work out. Letting him enjoy things he never got to do while in his previous relationship is a healthy way for him to move on. As you know, enjoying the single life for a bit will always be healthier than jumping from one relationship to the next. [Read: How to flirt with a guy and make him like you, without really flirting at all]

#7 Engage in physical activities together. Whether you work out or have sex, the important thing is he gets his body working, so his mind doesn’t dwell on the past. Physical activities can serve as an outlet for his frustration, and it allows him to let go of all those pent up feelings. Although the former option is better and less complicated, you can also consider hooking up with him and giving him a dose of mind-blowing sex that may just be what he needs to forget about his ex. [Read: 6 easy ways to kiss a guy accidentally and get away with it]

If not, you can always encourage him to stop moping around in his house and hit the gym together. And don’t forget to give him a good view of your best assets! [Read: How to attract men in a way they can’t resist]

#8 Boost his self-esteem. His last relationship may leave him with less confidence. He may feel worthless, and he may think that he is never going to have someone as great as his ex. Build him up by complimenting him.

Start with little things like his tie or his haircut, then move on to complimenting how well he manages his time or how great he is with pets. Make him see himself in a better light by giving him support and attention, as well as by expressing your appreciation for the little things he does for you. Give him your full attention to show him that someone as awesome as you sees him in a positive light.

#9 Let him get closure. Oftentimes, a person cannot get over the ex because there is still no closure. If this is the case with the guy you’re going out with, it may be a good idea to help him reach closure. If he feels like he needs to meet his ex to return her things or to just talk, let him. It may be scary for him and for you, but this may just be what he needs to see that his ex is not really worth dwelling on anymore.

By letting him get closure, he is putting an end to that chapter of his life and paving the road to a future without his ex, and maybe, just maybe, with you this time. [Read: How to text flirt and warm your way into his heart and pants]

#10 Be worth it. You may have helped him get over his ex and now he’s totally all over you—but you’re just playing with him all along. If you’re just after fun and games with this guy, please spare him! Getting over someone only to be burned again is every person’s relationship nightmare. Taking another risk after being hurt before also takes a lot of courage, so make it worth the risks he’s taking to be with you. [Read: 30 subtle, obvious and overly sexual flirting moves that guys love]

There is no tried and tested remedy that will make him get over his ex at the drop of a hat. However, by being there for him, you’re showing him that life can be great even if his ex isn’t in the picture anymore. It may take him some time to get his ex out of his mind long enough to see that you two have potential, but by being patient and giving him time and support *without being a doormat!*, you’ll see that your efforts can pay off.

Getting over someone does not happen overnight, so give it time. Give him the space that he needs to finally get over his ex and, if you guys are truly meant for each other, you will be able to pick things up again once he’s healed and ready. 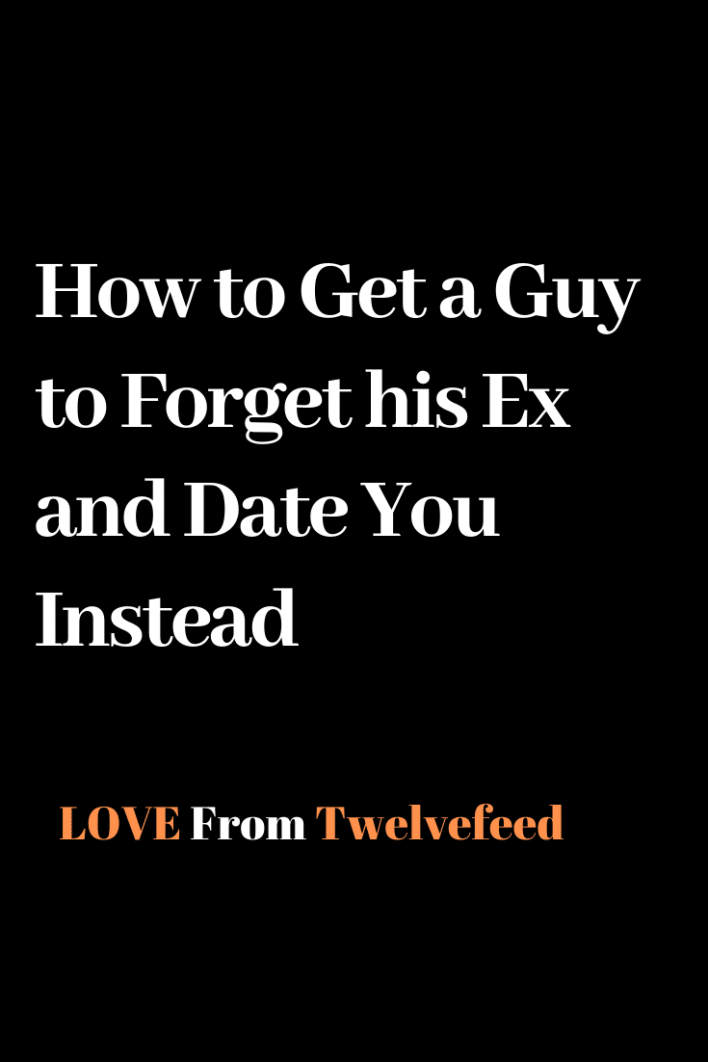 Online Flirting – Are You Cheating without Realizing It?

20 Breakup Songs You Can Use to Break Up with Somebody