Men and women think along the same lines when it comes to many things.

But marriage is not one of them.

Well, at least in most cases.

For most women, marriage comes naturally when they meet the man of their dreams.

For most men, marriage comes naturally only when they feel like getting married.

This little difference in the way both sexes think can at times cause more than just a few misunderstandings.

How to get him to propose to you

If you want to get him to propose to you, talk about it!

It really is the easiest way forward.

After all, both of you have been dating each other for a while, haven’t you?

In a good relationship, both partners have to learn to communicate their wants and desires with each other without really holding back.

Is he ready for marriage in the first place?

If you don’t want to put any pressure on him and want to understand what he may be thinking, here are a few things to watch out for.

#1 Men have to be mentally ready. Your man has to be mentally prepared to propose and move into the next stage of his life. No one can make up his mind for him, not you or anyone else. It’s a thought that’ll strike him just like a bolt of lightening when he least expects it, and just like that, he’ll be ready to get married.

#2 Men wait for the right time. Men have a right time for everything in their life, at least most well organized men do. During one of your weekend conversations with him, find out what his goals in life are. Once you hear his dreams, it’ll help you understand his priorities and realize when his right time to get married is.

#3 He learns from his friends. Men think they can never be manipulated. But in reality, they’re constantly manipulated by people in their lives, discreetly or otherwise. Take a good look at his friends. Are they married? Do you know their opinions on marriage? If all his friends are single, big chances are, he won’t be ready for marriage too. He may love you, but he may not be ready just yet to love you as a wife.

Things to remember if you want him to propose to you

Just like that fabled phrase, you can lead a horse to water, but you can’t make it drink. If he’s not ready, he’s not. Here are a few things you should keep in mind while trying to subtly convince him to go down on one knee.

#1 Don’t change yourself. Don’t withhold something just to punish him. You’d be behaving like a child. Really, do you want him to propose to you happily or do you want to arm twist him, gag him and shove marital bliss down his throat?

#2 Avoid giving ultimatums. It’ll never work. On the other hand, it might just backfire and force him to harden his stance on not getting married just yet.

#3 Don’t panic. When it happens, it will. If he feels like he’s ready to propose marriage to you, he will.

#4 Tell him how you feel. If you can’t stop panicking, tell your boyfriend how you really feel. Tell him you’re really happy with him and your life, but are afraid of the future because you have no idea what could happen. Additionally, tell him that your life seems too good to be true, like a happy bubble that may burst anytime. If he has any sense, he’ll know it’s time for him to make some assurances to you.

#5 The last resort. Don’t hide your emotions or play with words. Tell him exactly how you feel. Tell him you feel like the relationship is not moving forward. No guy who really loves you would make you feel like you’re hanging by a thread all the time. And if he really does love you, he won’t be upset to hear that. Instead, he’ll say something that makes you feel better.

#6 If he gets upset. If he retaliates badly, it only means he’s just not ready to commit no matter what you or anyone else says. A guy may truly love you, but he may not be interested in marriage. Can you deal with that? If you can’t handle that, and are really serious about getting married soon, it’s probably time to ask yourself if you’re with the right guy for you.

Tips to get him to propose to you

Here are a few subtle moves to help him see that a life with you as a wife can only make life a lot better and happier for him. You can’t buckle his knees for him, but you can definitely help him see that you’re the perfect wife he could ask for with these tips.

# Be the perfect girlfriend for your boyfriend. Let him realize that he’s got all he needs in a perfect wife in you.

# Take your boyfriend out with your married friends. Spend holidays or go out occasionally with a few of your happily married friends. Let him see how happy marital life can be so he’ll realize that he has nothing to fear.

# He has to like your family, and you definitely have to like his. Take time to know his family and get along with them. Likewise, he has to know your family and feel comfortably happy around them.

# Make long term plans together. Talk about buying a house, a pet, or investing together. While this may not make him go on one knee, it’ll at least reveal his acceptance of seeing both of you as a couple for years and decades.

# Don’t get too comfortable. Don’t settle into the serious boyfriend-girlfriend lifestyle and ignore your friends and your own life. Have your own life and your own ambitions so he knows you can live without him. It’s a subtle way of letting him know that you don’t need him to live your life. Men always like to feel like they’re being depended on, which makes them feel more in control of the relationship and the direction it takes.

# Have your own friends of both sexes. Always make him feel secure, but drop a few hints about all the other guys who are vying for your attention. Guys have a tendency of taking things for granted easily. By letting him know that there are a hundred other guys who would be happy to take his place, you’re letting him know that as much as you love him and care for him, you’re still not a pushover. A guy will realize your value only when he feels like you’re a prize that’s being fought over.

# Look after him. Make him a better man. Let him genuinely see that he’s helpless without you and your advice. As manly as men may seem, they always need a shoulder to lean on now and then. He’ll truly understand how much he needs you in his life when you support him and stand up for him.

Things you need to remember

If you’re wondering how to get him to propose to you soon, here are a few things you need to remember. After all, you are an individual, not just his arm candy.

# Your boyfriend doesn’t own you or control you. He is no one to make you feel ecstatic or down in the dumps by the way he behaves. If you really want him to propose to you, tell him straight that you’d like the relationship to take the next step. You’re both equal partners in a relationship, after all. And you definitely have a right to your own happiness and your future together with him.

# He may be using you. Your boyfriend may have unrealistic expectations. Is he really happy with you or could he just be using you to bide his time? If he gets upset while talking about the future of the relationship, think twice about whether you should still stay in love with him.

# Listen to his explanations. Don’t argue with each other. Instead, try to understand each other’s perspective. Your man may have his reasons for putting the talk on marriage on hold for his own reasons. Understand his perspectives and voice your concerns. If true love exists, true love will triumph without any hitches.

Use these tips on how to get him to propose to help him realize how important you are in his life and to understand that commitment and marriage is only the next happy step in love. 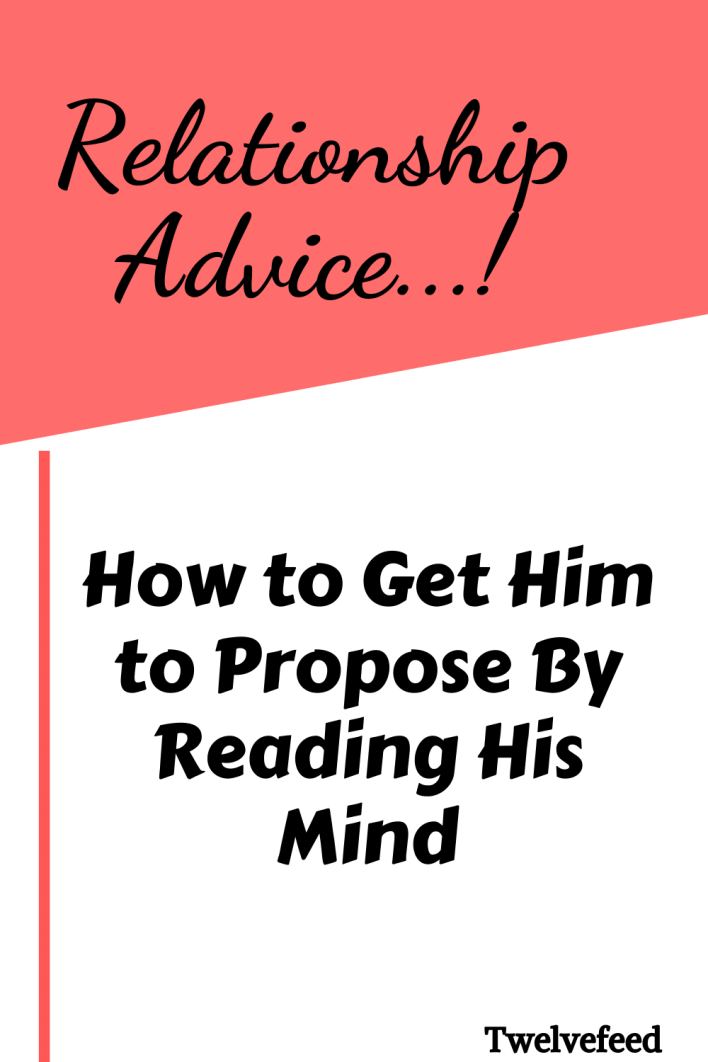 10 Deadly Phrases You Must Never Say to Your Girlfriend