Every now and then, there may come a time when you get pissed off with a guy. You may like him, you may be dating him, or you may have broken up with him. But at the bottom of it all, you may want his attention or you may want to prove your worth to him. And when you’re upset with a guy or just crying out for his attention and want to know how to make a guy jealous, there are a few ways to pierce his heart and make him sit up and take notice of you.

And it all comes down to this.

For a guy to take notice of you, you need to become desirable in his eyes.

[Read: How to increase your sex appeal]

Better yet, you need to make him feel like you’re unattainable. And the only way to do all this is by understanding how to make a guy jealous.

How to make a guy jealous

Jealousy induces desire and attraction, and it also makes a guy want you more.

[Read: Why men prefer a girl who plays hard to get]

If a guy likes you and sees you flirting with another guy, his jealously will make him desire you more and try harder to please you. But then, there is a thin line between making him love you more and making him hate you for the way you treat him.

There are many ways to make a guy jealous. Some are cute, but most of them are just wicked.

Depending on your relationship status with the guy, here are a few things you can do to make him jealous and take notice of you.

DATING A GUY WHO’S NOT ASKING YOU OUT

Are you dating a guy who’s not really asking you out or even bothered to find little ways and romantic gestures to please you? Perhaps, in all probability, he’s just having a fling or looking at you only as a pastime. [Read: 16 do’s and don’ts to make your boyfriend want you more than ever]

Use these tips on making a guy jealous if you feel like your relationship has no life or if you feel unwanted by your new boyfriend. If you want the magic of romance and chase in the relationship or if you want him to get more sexually attracted to you, you need to let him see that other guys treat you better, and that you’re getting a lot of attention from other guys too.

#1 Have a great life without him. If he cancels a date or makes any last minute plans, tell him you’re busy and hang out with your own friends. And when he calls you while you’re out with your own friends, don’t hang up after saying goodbye. Instead leave the phone on the table and let him overhear your fun conversations and bristle with rage for not being able to have a fun time with you.

#2 Speak highly of your ex. Bring some competition into the air by letting him know how great your ex was and how well he treated you so you can set a benchmark for him to beat. [Read: Tips to talk about past relationships the right way]

#3 Compliment other guys. If your guy doesn’t treat you well, compliment any guy friend for the smallest of gestures and talk about how sweet he is with your boyfriend. Your boyfriend will want the same attention too.

#5 Flirt on facebook. Getting a lot of attention on facebook from other guys could make your new boyfriend realize how desirable and wanted you are by everyone else.

#6 Ignore his calls now and then. Pretend like you’re busy and make him miss you. But look gorgeous every time you see him. He’ll be too mesmerized to stay angry, and yet, he’ll crave for you. [Read: Why do guys hate talking over the phone?]

#7 Let him know you’re getting attention. If another guy asks you out or flirts with you, let your new man know all about it. It’ll make him jealous, and it’ll also make him work hard to woo you and make you fall in love with him first. [Read: How to get any guy’s attention in no time]

DATING A GUY WHO’S TAKEN YOU FOR GRANTED

If your boyfriend only answers in monosyllables or treats you like a guy friend, or even if he has started to ignore you recently, here are a few things you can do to make him jealous and miss your presence.

#2 Appear mysterious. Don’t reveal too much about your plans to your boyfriend. Be vague in your answers and avoid having long conversations with him until he takes an interest in spending time with you.

#3 Hog the attention. Have a lot of fun with other guys, especially when you see your boyfriend walking towards you from a distance. And even if he comes close, just wave out to him and have a fun time with your own friends. If he can’t give you preferential treatment, why should you?!

HOW TO MAKE A GUY JEALOUS AND GET EVEN WITH HIM

Now these are wicked moves, and you really should use them only if you want to get back at a guy for what he’s done to you.

If a guy’s hurt you and you want vengeance, or if you want to mess a guy’s mind for cheating on you and walking all over you, here are a few things you could do to piss him off to no end. [Read: Things to know if you’re jealous of your ex]

#1 Make him compete for your attention. Date other guys and let him know what you’re doing. And if asks, tell him the other guy’s just a friend.

#2 Don’t worry about getting caught. Let him spot you with another guy, when you’ve told him that you’re busy at work. And pretend like he’s the one making a big deal out of a little thing.

#3 Cozy up with another alpha male. Get close to the guy your boyfriend feels insecure about and flirt with him subtly, especially when your boyfriend’s around.

#5 Flaunt a hickey. If you’ve just broken up with your boyfriend, hook up with someone and let your new ex see your hickey. [Read: How to hook up with a guy and do it the right way]

#6 Sleep with his friend. If you’ve broken up with your boyfriend, the best way to get back at him is by sleeping with his friend, preferably his best friend who’s a better guy.

#7 Sleep with the enemy. If you want to get even with your ex boyfriend, sleep with the one guy he hates. There’s no bigger way to make him furious.

PRECAUTIONS AND DANGERS OF MAKING A GUY JEALOUS

Let’s face it, all these ways to make a guy jealous may seem fascinating and fun to read. And the best part, it works really well too. But making someone jealous comes at a price. And at most times, the more you try to make someone jealous, the more it may backfire on you. Here are a few things to keep in mind before you try these moves.

#1 He may give up and avoid you completely. Jealously is almost always a positive sign in love, but pushing the odds can turn all that love he has for you into hate. [Read: 10 annoying girlfriend habits guys hate]

#2 He may retaliate with his own moves or criticize you publicly.

#3 He may see through your game and realize what you’re up to.

#4 He may even take to competitive flirting or plot ways to get even with you.

#5 The tables may turn and you may end up being the loser. And you’d feel even more jealous and miserable if your ploy fails its purpose.

#6 It may lead to complications and you could end up losing your relationship and a few friends too. [Read: Ways to deal with a complicated relationship]

#7 You may end up in pain or resent the whole game halfway. You’d end up angry and confused.

#8 You may become obsessive, possessive and destructive in your pursuit to win this game of jealousy.

#9 You may get what you want. He could end up stalking you or becoming obsessive and violent.

#10 You may lose focus of what you want. If you truly believe the relationship has no future, it’s better to just let go and work on healing your scars instead of plotting revenge all the time, while living in a toxic relationship that could make both of you miserable and angry.

It’s never a bad thing to make a guy jealous, as long as it serves its purpose. All said and done, the fact that one of you can get jealous proves just one thing, that there’s love in the air. [Read: How to deal with jealousy in a relationship]

Use these tips on how to make a guy jealous only to win back his affection and interest. But as soon as things get better, stop making him jealous and work on ways to better the relationship instead. 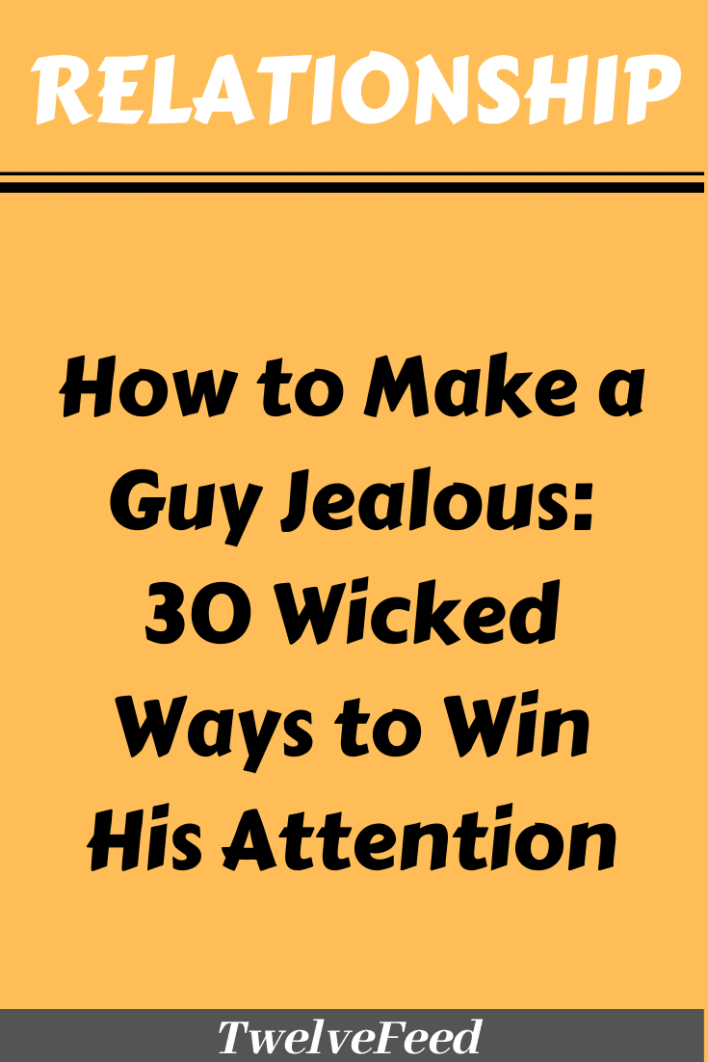 Does Your Wife Want to Sleep With Another Man?

How to Make Your Boyfriend Want You More Than Ever