Do you think your boyfriend could love you more?

Or perhaps, love you better?

Most of the time, girls just learn to accept their boyfriend for who they are.

Even though their boyfriends are nothing like the man of their dreams.

And over time, these girls compromise on their own wants and wait for their boyfriend to show the smallest romantic gesture to feel better about the relationship.

Seriously, don’t be that girl.

How to make your boyfriend want you

Every guy has the potential to be the perfect boyfriend, just as soon as he learns to follow the rules.

And it all starts with these 10 tips on how to make your boyfriend want you more and 6 more tips on things you should avoid doing to be wanted by your boyfriend.

All of us take relationships for granted eventually, even if we don’t intend to at the beginning.

But can you really blame yourself or your partner, when either of you don’t remind each other about it?

If you want to have a happy relationship and a boyfriend who appreciates you, don’t compromise on your wants and desires in the relationship just to make your boyfriend feel happy. He’ll start to accept you for who you are, instead of realizing how understanding, accommodating and genuinely nice you actually are.

Sacrificing your happiness for someone is a good sign, but only if it’s mutual. There’s a thin red line between sacrificing and suffering in a relationship.

Understand these tips on making your boyfriend want you and use them. You’ll see the difference in no time.

#1 Look good in his arms. Let’s talk about pleasing your man with appearances first. Guys are shallow, and the physical appearance of their girlfriend plays a big part in his ego and his desire to be with you. Look sexy and have eyes turn towards you when you’re in his arms. If his friends think you’re hot stuff, he’ll desire you and want to be with you more. And he’ll never want to let go of you.

#3 Spend time with your own friends. Make your own plans now and then. Go out with your own friends and feel good about yourself, be it in having a good conversation or attracting the attention of another cute guy. Believe in yourself, and remember that you’re still hot stuff. And the best part, he’ll miss you more when you aren’t available at his beck and call.

#4 Have your own life. Your boyfriend is only a part of your life, not all of it. If you’re always with him or he finds you available all the time, he’ll only take you for granted.

#5 Be a wildcat with fiery passion. Try new things in bed. If you want to know how to make your boyfriend want you sexually, don’t be predictable in bed. Try new things and don’t let bedtime get boring. Enjoy sex and take pride in your passion and interest in exploring sex.

#6 Be a smart girl. Be aware of the world around you, be it on the news or in current affairs. Men always think they’re more intelligent and aware. Prove him wrong, he’ll worship you and take you more seriously.

#7 Play hard to get when he takes you easy. Don’t let your boyfriend ever take you for granted. If you ever feel like he’s taking you lightly, put him in place. It’ll scare him, true, but it’ll also make him realize that you’re not someone to be taken for granted.

#8 Display PDA. Men love it when their girl shows her appreciation in public. It makes them feel desired and lucky. Wrap your arm around him or place your hand on his cheek in appreciation when he’s being nice. He’ll be a lot nicer and he’ll be happy to have a girlfriend like you.

#10 Follow your own dreams. Be passionate about life and your own ambitions. Your boyfriend will never respect you or desire you if all you do is sit wide eyed and stare when he talks about his ambitions and dreams, and have nothing to share in return.

#1 Don’t be too easy to get. Don’t be available for him anytime he calls you. Don’t change your plans just to be with him. Let him know that you have a life too, and he needs to take you more seriously if he wants you by his side.

#2 Don’t be a pushover. If he changes plans in the last minute and leaves you in the middle of a date to hang out with his friends, or cancels a date for silly reasons, don’t accept such behavior. If he walks away, call another cute guy and hang out with him just to get back at your boyfriend. It’s the only way he’ll learn.

#3 Don’t be eager to please him. Pleasing each other should be mutual. If you find that you’re the only one indulging in sweet gestures while he just behaves like a slob, put an end to it and make him work for your attention all over again.

#4 Don’t be the first one to make up all the time. This is especially important if it’s not your own fault. If your boyfriend’s taking you for granted, and you find yourself being the one who has to make up all the time, ignore him for a while or give him a cold shoulder. If he really cares, he’ll swallow his pride and come back crawling.

#5 Don’t be clingy and needy. Show off your independence even if you’re just idle and sitting at home. Appear like you’re a girl who can sort her own affairs. He should know that spending even a few minutes with you is a privilege!

If you want to know how to make your boyfriend want you more, sexually or otherwise, just follow these 16 tips. And always remember to have self respect. After all, you are awesome! 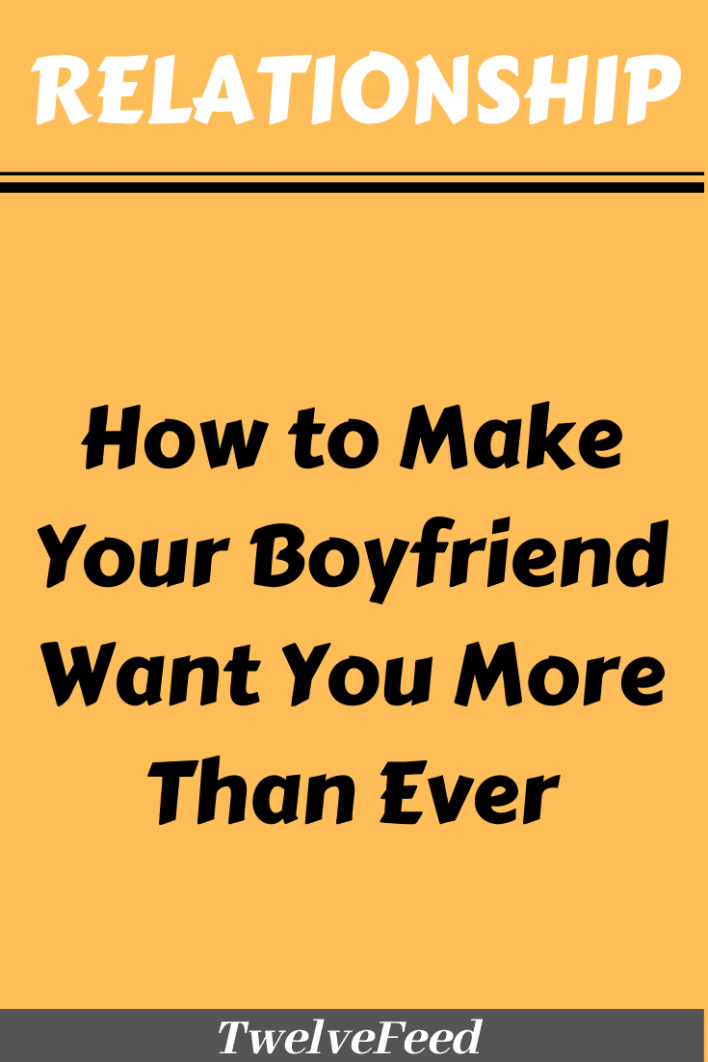 How to Make a Guy Jealous: 30 Wicked Ways to Win His Attention

25 Tips on How to Make Your Boyfriend Happy Every Day

2023 Love Horoscope: How To Win The Heart , Knowing, According To His Zodiac Sign
10 hours ago