There’s a simple difference between love and infatuation.

True love is like a big pot of water that’s been put to boil over a fire. It takes time to warm up, and once it’s warm, it stays warm for a long, long time.

And infatuation, on the other hand, is like a flash of water on a hot pan. It’s eye catchy, sizzles in a flash, creates a big scene, and vanishes before you know it!

If you actually want to stop feeling ignored by someone, you really need to understand this difference between love and infatuation.

And you need to realize that when you’re being ignored by someone you really like or love, you’re not dealing with love, but a state of infatuation *unless you’re talking about a long-term partner*.

You may truly be in love with this person, but if they ever showed any interest in you, it was probably only a state of infatuation for that person.

[Read: Is is infatuation or limerence? Understanding limerence better]

How to stop feeling ignored by someone you like

Are you being ignored by someone you really like? At the beginning, did it feel like this guy or girl really liked you, and seemed really interested in staying in touch with you? And now, are you the only one who’s feeling hurt because, for some reason you can’t comprehend, this person you care so much for, just doesn’t care about you at all?

Do they take several hours to respond to a text you sent them *even if they would respond almost immediately when they seemed interested in you before*? Let’s face it, this sucks, and worse, it’s just plain hurtful because you feel so helpless about it.

We’ve all been there, being ignored by someone we really cared for. And even if we talk about it with this person and try to understand why they’re drifting away so effortlessly, their lack of enthusiasm in having that conversation with you only leaves you teary eyed and humiliated. [Confession: I miss him so much but he doesn’t miss me at all!]

The question hurts more than the answer!

The truth is, more than anything else, you want to know why you’re being ignored. It eats you from within. You just can’t understand why this person stopped talking to you or chatting with you, and you want an answer.

It isn’t the fact that this person doesn’t care about you anymore that bothers you. In all probability, that hurtful truth has already sunk in and you’ve accepted it grudgingly. What really pricks you and leaves you tossing and turning in bed during those darkest hours of the night is WHY?! [Read: Why you should never make someone a priority when you’re only an option in their life!]

The truth – Why aren’t they making the effort if they care?

If someone really likes you, they’ll make the time and take the effort to stay in touch with you. Really, it’s that simple.

And however you look at it, or whatever excuses and reasons you try to conjure in your head, it all leads to the one simple idea that you’ve been trying to ignore all along. And that’s the fact that this person you like so much is ignoring you.

You can hate me for being blunt about it, but the sooner you admit it, the sooner you’re going to stop looking for silly excuses to defend this person’s behavior.

I admit, there could be a few scenarios where a person you really like *and they seem to have really liked you too* could be ignoring you because they have no choice. Perhaps, they’re already in another relationship, or maybe they’re moving away, or well, they’re suffering from a terminal illness and they don’t want to drag you down into a world of pain and misery. But really, the chances of that happening are very, very slim.

The reason won’t change your life

The first thing you need to do is leave the mess with whatever dignity you have left. After all, the harder you try to hold them close, the further they’re going to push you away. You know that already, don’t you?

Can you feel any more foolish about it?

And the more you push them to answer why they’re ignoring you, the more lighthearted or hurtful their answers would get, until their answers just mock your intelligence and sensitive feelings. [Read: How to recognise and stop a selfish person from hurting you]

They don’t care. You should do the same!

Move on. Just how long do you intend to stare at a blank wall or stalk them online? Just walk away. This person doesn’t care about you anymore, so why should you? Of course, it’s going to hurt. And of course, you’ll feel miserable.

But all these sad feelings, well, they’re all going to go away once you make up your mind to move on for good. It may take a week or two, or perhaps, a month or two. But your addiction to this person will end, as long as you make a conscious effort today.

If you’re ready to overcome your addiction and get over this person who’s ignoring you, here are 10 steps that can help you feel better about yourself. But at every step along the way, you need to make the effort to stay dedicated to your goal of wringing their hooks off your heart, even if it hurts you at first. You slip here, and you’ll only fall harder and feel worse about yourself. [Read: If you love someone, should you let them go?]

#2 Begging and pleading won’t help either! You’ll only feel more helpless and frustrated. The more you beg and plead, the more you’ll make them cringe and make them take one more step further away from you.

#3 A heartfelt letter. If you really want to pour your heart out one last time, do it. But I won’t recommend it because there’s a very big chance that this person would just read it, roll their eyes in disgust, and trash your sad, teary eyed heartfelt note.

There is a very, very small chance though, that your letter may prick their selfish heart and soften it up. But think about it, if this person knows how much you love them already, and still chooses to hurt you by ignoring you, would they really care enough to respond to your note or change in the future? Think about it. Even if they stop ignoring you after reading your note, could it last forever? Or would they just ignore you again after a while?

My advice to you here is to avoid pouring your miserable feelings on a letter, even if you want it to be the last time you ever say anything to them. Just walk away, you won’t find any solace in writing a note. And you’ll only feel really miserable if they don’t respond to you. [Read: The perfect way to let go of someone you really love – Hate them first!]

#4 Ask a question if you must. If you really want answers, just ask them a question in a casual manner. They may reason their behavior with a ridiculously lame excuse, but really, what else where you expecting? The truth? Really? LOL!

#5 Keep yourself busy. Once you think you’re ready to get past the stage of trying to get in touch with them or explaining how you feel to them, take your first step in moving on for good. For starters, keep yourself busy doing something that keeps your mind occupied, whatever it may be. [Read: How to let go of a relationship that’s bad for you in every way!]

#6 Stop stalking them, one step at a time. Do you keep track of this person all the time? Have you added this person in your list of close friends so you can make yourself feel miserable each time you know they are online, and still not responding to that message you sent them on facebook? Back away, one step at a time. There’s no happiness to be found at the tip of a blade that’s stabbing your heart, even if you’re the one applying the pressure on its handle.

#7 Ignore them. Consciously make up your mind to ignore this person. Cut the strings that bind you to this person. Don’t try so hard to stay in touch with them. Don’t jump with excitement each time you see their name on your phone. And even if you have the occasional conversation with them now and then, avoid thinking about it. Instead, realize just how trivially they treat you each time they talk to you. [Read: How your self respect affects the way you let your crush treat you!]

#8 Spend time with friends. Have you realized how easy it is to ignore this person when you’re out with friends, having a good time? That’s the key. The more fun you have and the more you keep yourself distracted, the easier it would be to move on and forget this person ever existed.

Remember, conversations with others would prevent your mind from drifting towards thoughts of this person. And that’s always a good thing. [Read: 16 discreet signs you’re being taken for granted by the one you really like]

#9 Meet someone else who catches your fancy. You’re hurt because someone you fancy is ignoring you. So change the person you fancy! Try to focus your interest on someone else, even if that person isn’t someone you know well. All you need here is a distraction, and even a silly crush on someone you don’t even talk to can help you overcome the feeling of being ignored.

#10 Realize your progress. And use this realization to your advantage. You don’t miss this person today, as much as you missed them last week, do you? That’s a positive sign, and a good sign of progress. Realization can be your biggest strength, as long as you’re making the effort to ignore them back!

[Read: 15 signs the person you love is leading you on and taking you nowhere]

If you’re feeling ignored by someone you love, understand these pointers and use these 10 steps to get over them. It hurts, and you may feel helpless right now. But as long as you use these tips, you’ll be in a much better state of mind in no time! Now isn’t that worth the effort? 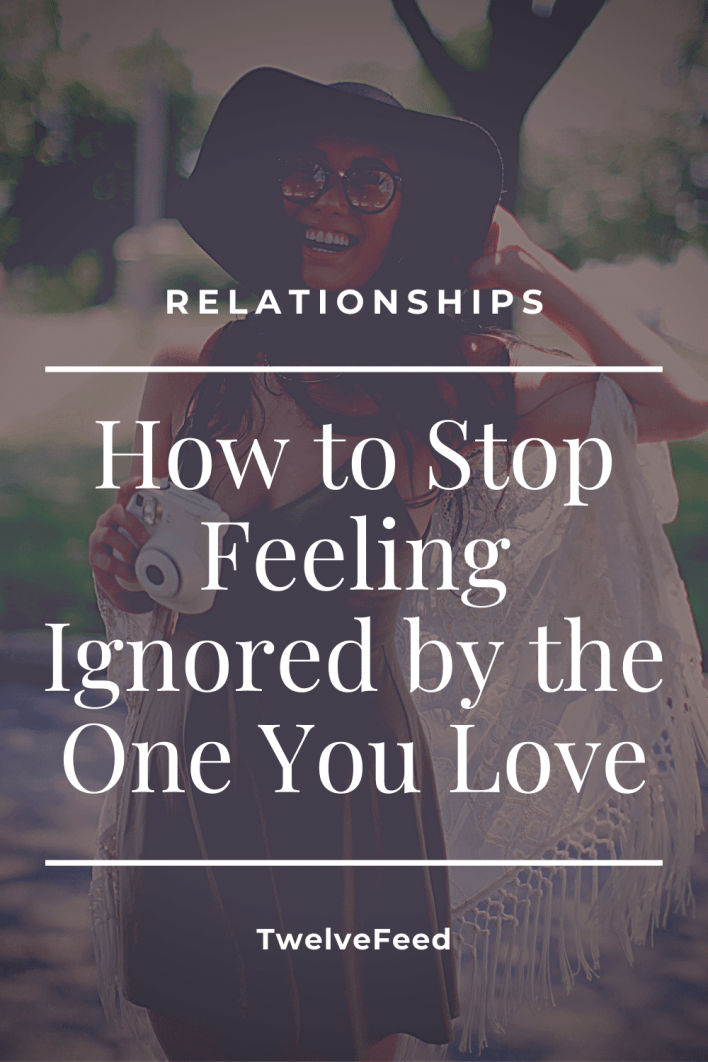 20 Sure Reasons Why a Guy Could Be Ignoring You!

Should You Ever Forgive a Cheating Partner?