Honestly, I hate when my man is in one of his “moods.” Seriously, sometimes it can be worse than a PMS-ing 13 year old on steroids – and that’s putting it mildly. Men have a way of just shutting down completely when they’re feeling down and it can be quite difficult to get in there and provide any kind of assistance.

Everybody has times in their lives when they’re feeling down and just bad about themselves in general. I know for me, it’s generally post-holiday season when I realize that I’ve eaten just about every type of sweet treat and candy I could ever possibly get my hands on. I feel bloated, flabby, and there is a significant dip in my self-esteem.

Lucky for me, there’s always someone there to pick me up when I’m feeling down. Really, all I need is a “you look beautiful”, and that’s enough for me to feel like a million bucks.

But what about a man? How can you stroke his ego when he’s feeling down?

Men are a lot different than women in this sense. Sure, they like to be told they look hot, but that might not do the trick if you want to make them feel better when they’re down. For whatever reason, men don’t typically like to discuss their feelings and the things that are going wrong in their lives.

And as frustrating as that may be, there is one thing that they all have in common that we can use to make them feel better and that is this: men like to feel manly. What better way to stroke his ego than to emphasize these characteristics in him? [Read: 14 things you say or do that makes your man feel less manly]

There are a lot of ways you can stroke his man ego when he’s feeling down and here are a few that seem to do the trick for my man.

#1 Need them. Men love to feel like we can’t do things without them. Even if it’s as simple as asking them to open the pickle jar for you. This not only makes them feel wanted and needed, but it also plays up their strength – making them feel good about their physical shape.

A lot of men put their worth in how much we need them. So if they’re already feeling down and out – whether it’s related to anything like that or not – showing them that you need their strength in their life will make them feel secure again. [Read: The real reason behind why men love damsels in distress]

#2 Compliment the work he’s done. Just like a woman loves to hear that her eyebrows look fantastic *and we know we slaved over them in order to achieve perfection*, a man likes to hear that the heavy shelf he hung up looks perfect in the walkway. When they feel like their skills are being put to use and that they’re doing a good job, it lifts their spirits immensely.

#3 Tell him that he’s special. Every man wants to hear that they’re not like others. Just as much as telling him that no one else could possibly do something as well as him will go a long way in making him feel better!

Something along the lines of, “no one has ever done _____ as well as you. That’s really unique and interesting,” will be sure to lift his spirits and get his ego back in check. [Read: 25 compliments for men they’ll never ever forget]

#4 Be flirty. Flirt with him! Make sure he feels like you still want to hop in the bed sheets with him even though whatever has happened to him is making him feel upset. Knowing that even though his mind is in shambles because of something else but you still want him anyways will make him feel better about any situation.

Giving silent compliments is a great way to flirt with your man. Grab his butt and biceps or run your hands along his sexy abs. Spanking him as he’s walking by and following it with a wink is a great way to show your appreciation for him while being flirty at the same time. [Read: 25 ways to make your guy feel appreciated and cared for]

#5 Distract him. You can do this in any way you think will work. Take him to the mall, or a car show, or a concert, or whatever it is that he’s into. Show him a little something, something naughty – just probably not at one of the places you take him because that could make matters worse. Taking his mind off of the thing that has him in a rut will be sure to make him feel better in no time.

#6 Provide support. Men don’t normally like to talk outwardly about their issues and what is making them feel upset, but that doesn’t mean you can’t let them know you’re there. Even if he doesn’t want to or won’t talk about the problem, it will make him feel better knowing that you realize he’s upset and will be there for him if he wants, but that you’re not pushing him to talk about it.

Giving a man his space will allow him time to self-reflect and figure out the issue on his own. It will also make you look like an awesome, understanding, and supportive significant other and he will recognize that. It’s a win-win for everyone, really. [Read: 10 obvious hints guys give when they want more space]

#7 Give him a sexy back rub. Go out and get a kick-ass scented oil and tell him you want to make him feel good. Not only will the actual massage relax him and make him feel great, but he will also feel better knowing you want to rub him down with oils. It may also lead to a little something else that will make him feel better in different ways. Wink wink! [Read: 12 foreplay moves for men that really, really work!]

#8 Do him some favors. But don’t say anything about it. Silently doing something that you know he will like is enough to lighten his mood and make him feel good. He will realize that you not only recognize that he needs a pick-me-up, but that you’re willing to put in the work just for him without making a big deal about it. That alone will make his ego sky rocket.

Things like cooking his favorite meal, doing his laundry, tidying up his place, and other favors like that will give him a break, reduce some of his stress, and he’ll find appreciation in what you do for him as well.

Ultimately, you know your man better than anyone else, so you really will have all the secrets to making him feel better already.

[Read: 15 sweet ways to make a guy feel needed and wanted in the relationship]

But if you’re not sure how to lift his spirits up, just use these 8 tips and you’ll be on your way to boosting his ego – just be careful that you don’t stroke it too much or you’ll have another problem on your hands! 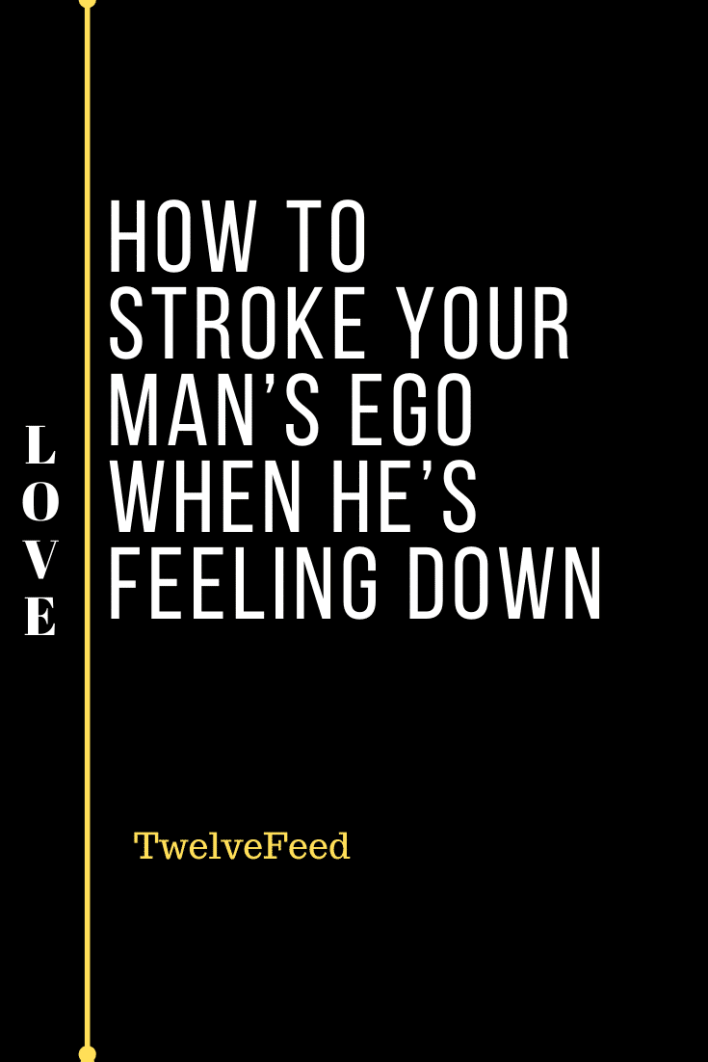 His and Her Guide to the Perfect Offbeat Date

12 Corny Lines that Will Definitely Make Your Man Smile