Do you want to know to think like a man, especially in a relationship?

Ever heard your man grumble that you just don’t understand him?

Or did he whine about how women are just so different?

Now before you try changing yourself for his sake, you should know that men may whine a lot about women and their behavior.

But all said and done, men still want women to behave like women, and leave the “manly” behavior to the men.

There are a few times though, when you behaving like a man can make him exceptionally happy.

So if you want to know how to think like a man, and impress your guy, here are a few starting points.

Thinking like a man is easy. Girls grow up and become women. Boys get bigger and become men.

If you want to think like a man, all you need to do is bring out your inner tomboy child.

Try these manly behavior traits when you’re with your own man. And big chances are, he’ll bear hug you in happiness or brag about how his girlfriend is the bestest in the whole world to all his friends!

Men don’t beat around the bush

If you want to think like a man, start with this one.

When you’re angry, do you always tell your man straight out about the reason behind your frustration? Most women don’t. They’d rather hold it in and grumble in a corner while the man goes back into a series of flashbacks just to understand what and where he did wrong. And almost always, until he realizes what offended his woman, he pays the price.

Men don’t do that. If your man is angry with you, he’d rather just blurt it out to you in a bad way than hold it in and rephrase the crushing annoyance in a manner that would have the maximum impact. If you want to be a man, the next time you’re upset with him for something, say it out straight and don’t beat around the bush. At least then, he’d know what he’s apologizing for!

Ever seen your man sitting by himself and happily building a car scale model or polishing his car? He likes doing that. Men absolutely love their space. He may feel guilty at times and try to spend more time with you to make up for it though.

The best way to deal with this is by keeping yourself occupied with your own hobby once in a while. Go out with your friends now and then, or indulge yourself in a few activities that you enjoy around your own place. By doing this, you’d lift your man’s bag of guilt off his back, and help him appreciate your independence a lot more!

All women know this well. Your man may be nice enough to spend a while indulging in foreplay for your satisfaction, so learn to return the favor now and then by excusing him off a few tongue twister moves and cuddles before sex. Take him straight to bed and ask him to get on top as soon as you feel ready down there. He’d probably be surprised, but it’s going to be a happy one!

Your man loves his gadgets and games

All men love playing on their game consoles or even spending time with their little remote controlled cars. It may seem immature, but for a man, it gives him a bit of time to get away from the world. Now men know their women would never understand this fascination.

But if you want to know how to think like a man, let him know that you can enjoy a good game too. The next time your man’s out for a while, play with his man toys and try to enjoy a good game. There’s a good chance that you may understand his fascination after a while too.

And when your man does get back home and sees you busy enjoying his game, there’s a big chance his eyes will well up with tears of joy!

Men just love losing control of their senses now and then. Every man has his own reason, all the way from hoping he’d get molested in a drunken stupor by a group of sexy girls, to drinking being his way of dealing with the crap life throws at him.

Plan a Saturday night for him. Stock up your refrigerator with beer and booze and get wasted together. Just make sure the doors are locked and you’re close to the bed and the loo. Remember, the fun starts when both of you start trash talking. The best part is that your man would never forget those happy nights when you both have fun binge drinking together. Dealing with the hangover come Sunday morning, well, that’s a small price for a load of happiness, isn’t it?

Ever caught your man in front of his computer late at night with his hands deep inside his pants? Of course, your man will be embarrassed to get caught in a compromising position.

You may be pissed off or even insulted to see that he actually had to watch another naked woman to get an erection and have a bit of fun when he already has you. It’s natural that you’d feel that way, but men don’t understand that.

Instead of rebuking him or getting upset and throwing a pillow for him to sleep on the couch, join him and watch the movie together if you want to think like a man. Watching erotica together can be a lot of fun and he’ll feel relieved too.  How many lucky guys get to have sex with their woman while watching a few other women at the same time? And odds are, you’ll love the hot men in the movie too!

Times when he won’t enjoy your manly behavior

Now that you know how to think like a man, use these tips to impress him and let him know how understanding you can be.

But at the same time, don’t overdo it. It would only upset him or make him wonder what’s going on. Here are a few great examples of woman showing man behavior gone wrong.

# Sex is just sex. Don’t fall asleep immediately after sex like a man does, without even looking at him. If it happens a few times in a row, he’ll probably spoon you and cry himself to sleep.

# Men look at other women even if they’re in love. Don’t do the same. He’d probably pick a fight with the guy you’re staring at, or think you’re a flirty cheat-in-the-box. But use this move if he disrespects you by ogling a lot at other women all the time.

# Men don’t change their favorite frayed pants or tee shirts unless his woman throws it out. If you wear your old, fading clothes and laze on the couch, he’ll probably think you’re starting to look ugly.

# Men burp and fart with their friends. But in your endeavor to think like a man, don’t ever do that. He’d think he’s turning gay or you’re turning into a guy. Either ways, it’s not good news for you. 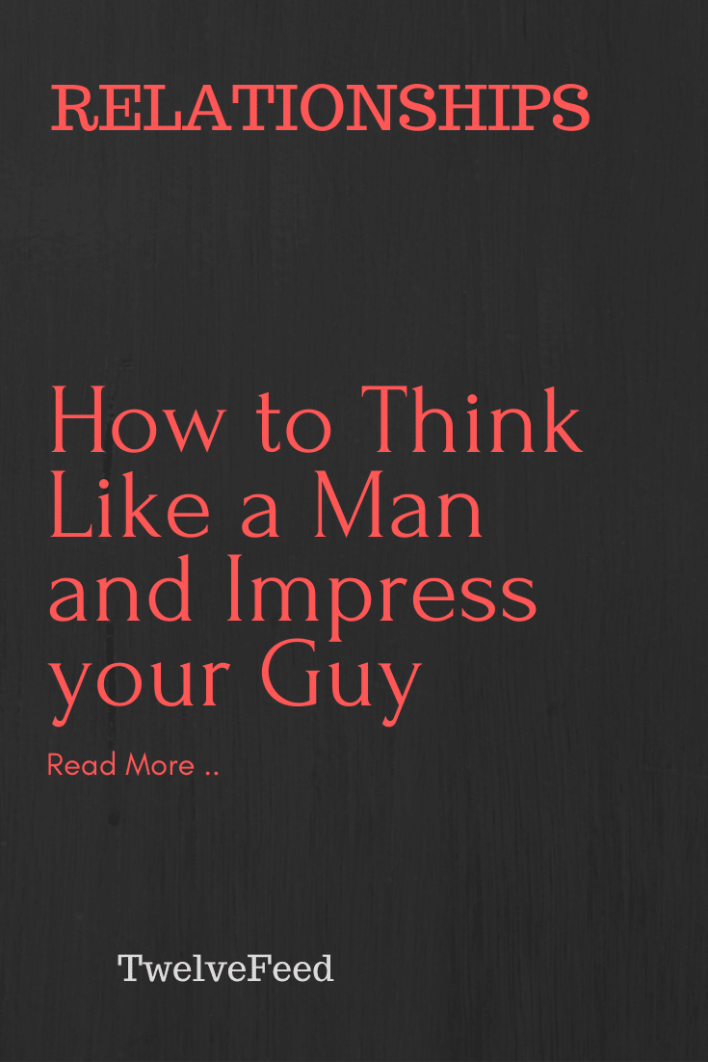 How to Be Friends with an Ex Without Any Complications