It was 3 a.m. that night when I crawled into bed after a girls’ night out. As I lay on my pillow and looked at the dark room, I heard the ping of my cell phone. I reached for my phone and saw his name. It was not even a text, actually, but a snapchat because he didn’t want to leave any proof. I waited three or four minutes before I opened it.

My heart sank into my stomach because I went to that particular bar that night just to see him and he wasn’t there. It was always when I mentally prepared myself to spend the night alone that he suddenly appeared, almost like he had some sort of bell alerting him every time I forgot about him. I wanted to receive texts and snapchats from him, but not at 3 a.m. He didn’t want me at 3 in the afternoon, he only wanted me at night when he was drunk.

After a certain time in this almost relationship, I finally found some good sense and learned a few things about guys who text you at 3 a.m. Although it hurts, you’re not special to him. He hasn’t CHOSEN you among all his options, he chose you because he knows you’re the easiest option. At 3 a.m., he hasn’t thought about you specifically, he thought about himself. A guy that texts you after midnight only thinks about himself.

There are tons of guys like him, and if you’re reading this, it’s probably because you know one or lust after one. When he texts you, you probably want to answer right away because you keep telling yourself, “He could have texted anyone, but he texted me.” In reality, he texted you because he knows you will always answer. You’re not stupid and you’re not naïve, you’re just caring for the wrong person. You still care about him because you remember when he was sweet.

In my case, that’s why I had difficulty moving on; I always remembered the times when he used to send me good morning and good night texts or when he never wanted me to leave in the morning. After he proved to me over and over that he didn’t care, I still didn’t let go. When I went to that boy’s house, I always tried to convince myself that it would be the last time. I told myself that at least five times, and every time I would leave his house, I would feel like shit. I would feel like I’d failed one more time. I never got any news from him except that 3 a.m. text every Friday night.

Even when he was only texting me at 3 a.m., I still saw good in him, and you do too probably. I also know why you can’t move on, because he’s probably the only one capable of making you feel special and you’d rather feel special at 3 a.m. than not feel special at all. I want you to know that you are special, with or without him.

Stop allowing him to make you his backup plan; stop settling for less. The person that is meant for you will always treat you like his first priority. He will text you in the morning, at lunch, for dinner, and at night. He will text you to tell you that he misses you and will want to see you at 3 p.m. and 3 a.m. You’ll never be confused with him because you’ll know you’re important to him. Do this for me and don’t answer his 3 a.m. text. 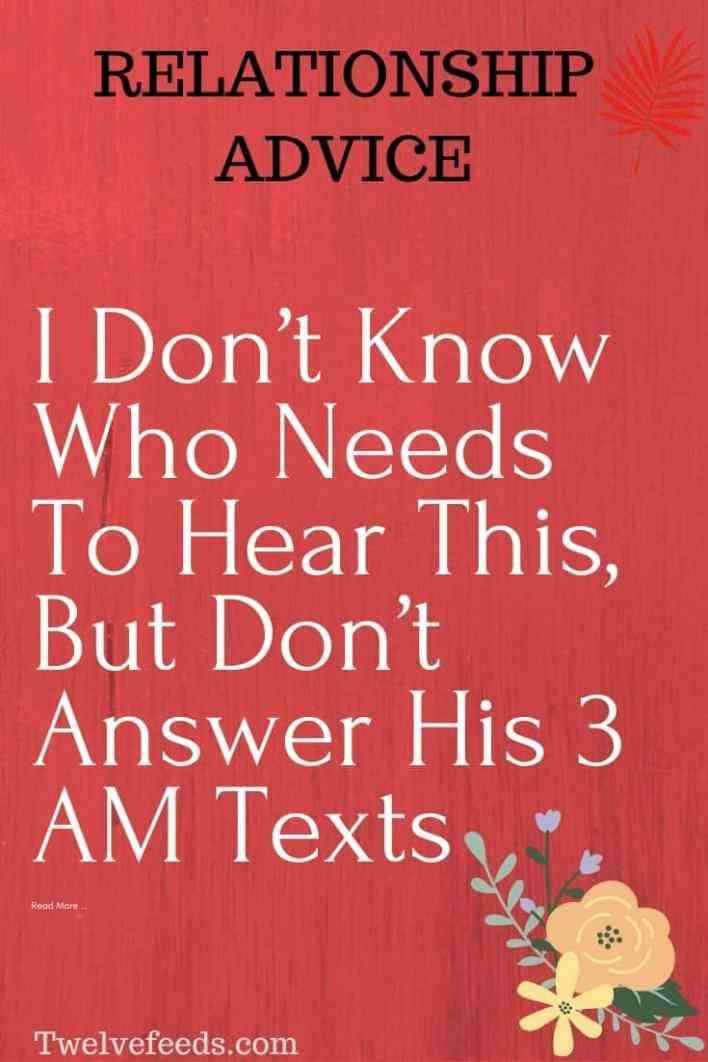 I Don’t Regret You, First Love

No, The Global Crisis Hasn’t Made Me Think About My Breakup Any Less