When I think about the things I enjoy about sex, I think about the connection I feel to the other person and how it feels to experience something sublime with someone else. Later on, I think about physical pleasure, but I can get that on my own, it’s not exclusive to sex so it’s not one of the main reasons to seek it out. For me, it’s more about connection and that has become a rare thing to find.

I remember trying to explain to a guy on Tinder once that I wouldn’t have sex with him because it was destined to be bad sex. He couldn’t understand (or, he understood just fine and couldn’t care). For men like him (and, it’s a lot of men, percentage wise) even bad sex is good sex because he gets off and adds to his body count. What do I get? Certainly not any of the things that makes sex special or pleasurable for me. I just get to live with another layer of STD/pregnancy anxiety until I get my period and/or next visit the doctor.

And sure, men have to worry about STDs and pregnancy too, but let’s be real. Because of the nature of sex and the way our bodies work and the roles we have been socialized into, it’s way easier for women to get infected than for men. And if a woman gets pregnant, it’s her body that has to go through pregnancy or abortion, and even if they get married the woman is, no matter what, likely to be doing most of the childcare and planning for the kid’s life and future. This is just the way it shakes out most of the time and an extra burden for women to carry if they are sexually active with men.

Knowing this, I’ve still had casual sex because it feels like the cost of entry to not be alone. I haven’t felt like it was something I could opt out of if I wanted a normal life. And I’ve had a lot of bad, unwanted sex as a result.

I’ve been dating men for about 15 years and in that time my anxiety has grown like a hockey stick. I don’t think it’s a coincidence that being told my feelings are inappropriate and second guessing every time I feel angry or hurt about something has harmed my health. I think that my self-esteem and sense of self-efficacy have been eroded by gaslighting, and it’s caused pretty major damage to me. I went to the emergency room when I had a panic attack in my doctor’s office during a routine appointment. How did I get to the point where I didn’t trust myself to make it through a doctor’s appointment so much that I panicked and ended up in the ER? It might have something to do with being consistently told that the way I think, feel, and act is “wrong” when it doesn’t fit into hookup culture’s race to the bottom of how robotically we can treat each other.

I’ve come to the point of working on my self-esteem where I have to wonder if maybe I’m not just flawed. Maybe my feelings are valid. Maybe instead of being fundamentally unhealthy I’m just putting myself in unhealthy situations again and again.

I don’t agree with “you don’t owe them anything” culture. I think you owe it to everyone you encounter to treat them with respect and care. What else is the point of civilization? What else is the point of living in community? You should treat everyone you meet as if they deserve dignity simply by existing. If they become toxic to you, establish boundaries, but you don’t get to blow people off once you’ve used them for whatever fun you can suck out of them. You don’t get to haggle with them for the least care you can give them while being intimate with their body.

It feels like I know this is wrong, but I feel wrong because so many people tell me that it feels perfectly healthy for them. I feel like a burden for wanting someone to care about me. I feel like I am one of those people in the Erin Brokovich town that is telling people I drank the water and got sick and everyone has a vested interest in trying not to believe me. It’s “my fault” for not being clear enough that I’m unable to enjoy sex without care. I just think people should care about each other whether they are having sex or not.

And I know male socialization plays a big role in this. We acknowledge that people who are veterans have an unavoidably higher risk for suicide because of the way we train them to be soldiers. We teach men that they are more manly when they sleep with a lot of women. We teach them that they are weak for wanting to connect, for wanting to be touched or loved or cuddled. We teach them to avoid forming emotional connections with people in order to achieve while we also teach women that their emotional connection with a man is the most important thing in their life. This isn’t something individual men are in charge of or to blame for, but we can also acknowledge it isn’t a great system for women.

If I am not getting what I need and want out of sex, I am not going to have it anymore. If that makes me difficult or prudish, so be it. If I am single forever, then that is a price I am willing to pay to no longer have unwanted and unenjoyable sex with men. I wish someone would have told me this was okay sooner but I will settle for having learned it by my mid 30’s. It feels good to know I am no longer going to do something that doesn’t serve me. 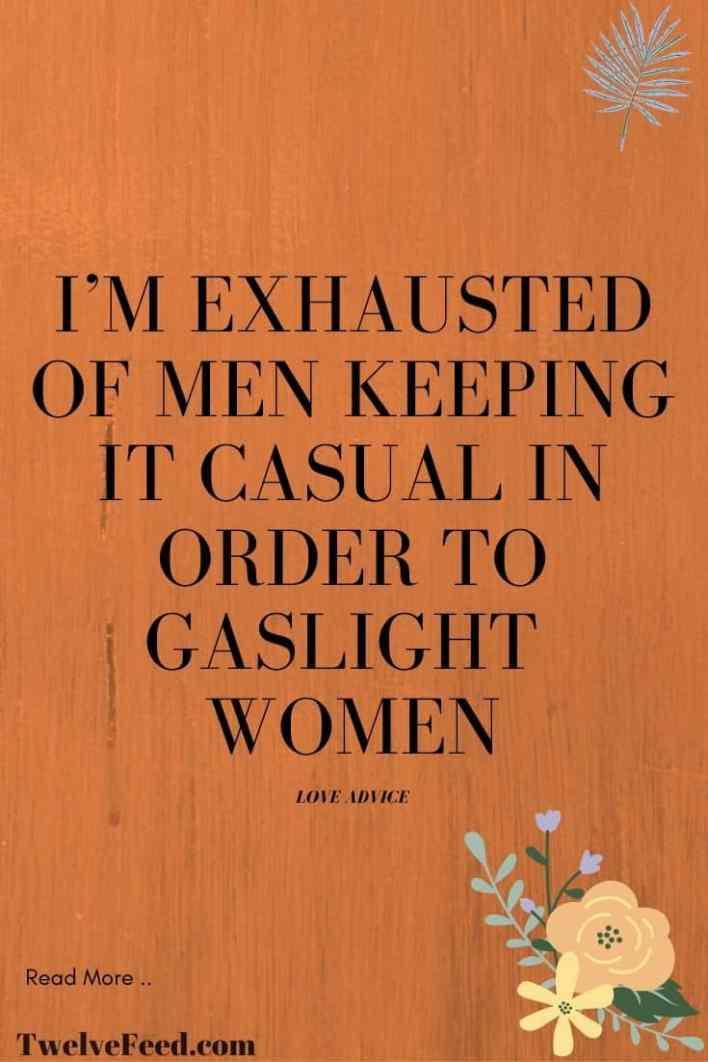 Darling, Don’t Doubt Yourself Because Of Some Stupid Boy