There are some of us who form a life around finding our value in making those around us happy. That is a road to emptiness. The fact is you spend your whole life trying to get everyone to like you and you won’t ever be able to. There are some people who will dislike you simply because you try too hard to get them to like you. Sound crazy? It is, and that is why you need to learn how to say no.

If you are overscheduled and constantly feel overwhelmed, then you have no one to blame but yourself. Whether it is work or family obligations, you always have two options. You can say yes, or you can say no. For those of us who want to please people, saying “no” goes against all that we are.

I always admired people who call someone when they need help, admit that they are in over their head, or even just put themselves first and not have a problem just saying “Sorry, I can’t.” The problem is that I try to say “yes” to everyone and create a scenario where I am getting the exact opposite result of what I try to achieve.

Learning the art of saying no by reasoning through it

What I find is that I say yes to make people happy. But, in the end, I either end up letting people down by not coming through or behave illusively while doing whatever it is I said I would, which drives people away. Being stressed out doesn’t make me very liked, which is the very reason I said I would do it to begin with.

If this is a cycle you are familiar with, the only way to break it is by figuring out how to say no. Although seemingly a bad word, no said in the right way, isn’t bad at all.

If you learn how to communicate better and say no honestly and with sincerity, no one is going to be upset that you can’t help them out. They see that saying “yes” won’t be doing either one of you any favors.

#1 Don’t overexplain. The key to saying no is not to overexplain. You don’t have to give someone your entire schedule or explain why you can’t do something. That just leaves you purging all over them. If you can’t do something, it isn’t on you to explain why you can’t. Just like it is anyone’s prerogative to ask for a favor, it is your prerogative to say no. It really is that simple.

It is best to keep a concrete schedule, and, once full, you just can’t do anything more. Constantly moving things around or shifting your responsibilities leaves you stressed, overworked, and probably leads to you dropping the ball and letting people down. It isn’t your responsibility to work around everyone else’s schedule. If they ask for a favor, make it fit your life, not the other way around.

#3 Offer an alternative date/time/situation. If someone asks you for a favor and you can’t do it, find out if there is another time that you can help them out. Sometimes things can be flexible and sometimes they can’t.

Giving people the option to find another time for you to help is not exactly like saying no, rather it is saying “maybe another time.” If they can’t do it any other time, at least you tried to do more than just say “no.”

#4 Realize if they are mad it is on them. If you continually say yes to get people to like you, then you aren’t doing it for the right reasons. It only leads you down the road to misery.

If someone makes you feel like they will be upset with you if you can’t do something, then they aren’t really concerned about your feelings at all. Why try to make someone happy if they don’t care about how you feel? Doing things to make others happy or out of fear, never leads you to find happiness. It ends up making you feel empty.

Negotiation is a great tool to help you feel less used. Over time, if all you ever do is say yes, even when you don’t want to, you begin to feel used. It will have a real consequence on your self-esteem. Giving something to gain something is a much more equitable system for your psyche.

#6 Think of the worst-case scenario coming from the word “no.” Fear can be a very persuasive motivator. If you want to say no but are afraid to, try to think about what the worst possible thing from telling someone you can’t or won’t do something is.

Likely, whatever you think is going to happen from saying no, is way more stress provoking than real. If you say no, the consequence is going to be that they ask someone else and totally forget about the entire scenario.

#7 Realize your self-worth is not in doing things for people. It isn’t your job to make the world go ‘round. If you always say yes to people because you think that is why you are here on earth, then you negate your first obligation which is to make you happy.

If always saying yes isn’t making you happy, then you let yourself down. You can’t define your self-worth by what you do for other people. If you do, you are always going to feel pretty worthless.

#8 Create boundaries. There are going to be some people who abuse your kindness and turn to you for everything in their life. It is important to recognize those people who take advantage of your generosity.

People that continually ask for things but rarely give back don’t deserve your time or your help. If you wouldn’t feel comfortable asking someone for a favor, then you shouldn’t be doing them one, period.

There are reasons that some people can never say no. Mostly, fear of reprisal or to gain acceptance and to be liked. The truth is people will like you for you, not for what you do for them.

Doing things isn’t a way to gain friends or make yourself happy. In fact, spending your life saying “yes” when you really want to say “no,” is a self-sabotaging behavior that almost always lead to feelings of emptiness. 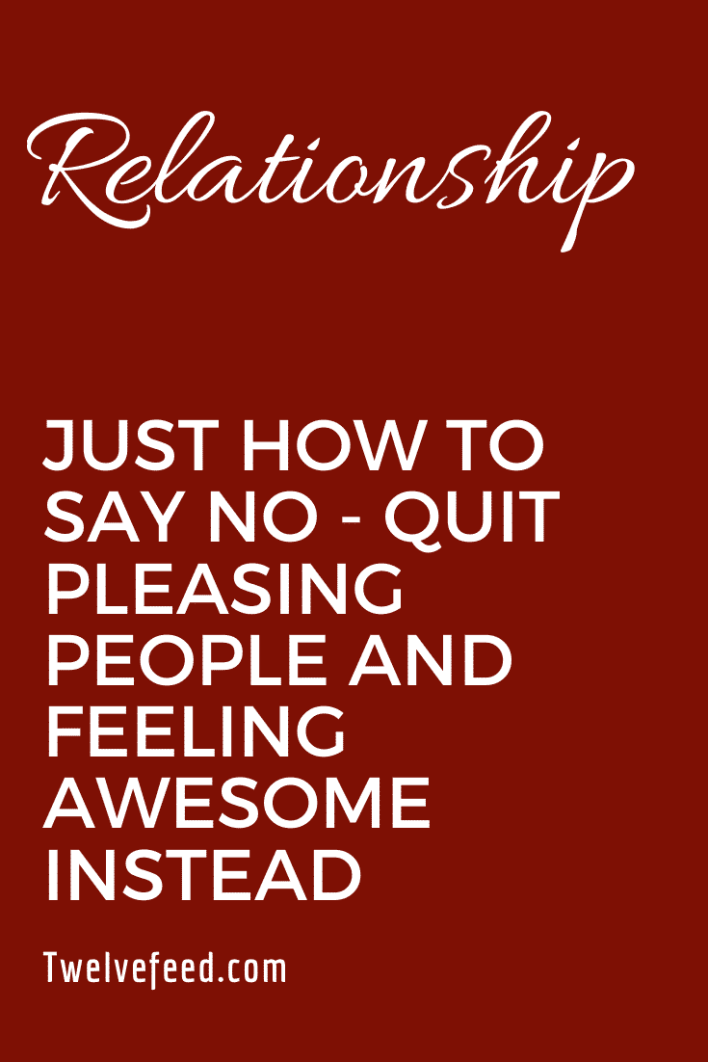