Ghosting is something that has become popular as a means to avoid confrontation when it comes to—well—dumping someone. Many people use it so they don’t have to face the other person’s emotions or reaction. They think they’re safer just not communicating at all, and that they’ll be completely off the hook!

But are they really? Many people only see one side of ghosting: they refuse to return phone calls, texts, emails, and cut off every other form of communication. But what about the other side? What about the people who sit on the other end of that silent stream of nothing, contemplating all the things they may have done wrong—or even worrying that something has happened to the ghoster?

Ghosting: is it really the best way to go?

Never having been ghosted myself, I can’t say for certain what I would do in that situation. But I do know of a few people who took it the extra step, and retaliated against their ghoster. I quickly realized that ghosting actually happens more often than we realize.

People who ghost do not always get off scot-free. It may seem that they can just ignore their significant other and leave it at that. But there are people out there who have had enough of this behavior and want some answers.

I, for one, would definitely be one of these people, if it ever happened to me. People who are sick and tired of the ghosting trend sometimes go out of their way to make sure the ghosters know exactly how they feel. [Read: What is ghosting and how it affects you]

If you’re someone who finds that it’s easier to just ghost people rather than confront them, you’ll want to beware of these consequences. Watch out for who you ghost!

#1 Face to face confrontation. That’s right. There are people out there who will have none of your ghosting ways! If you’re scared of the confrontation to begin with, then ghosting is not the way to go; some people will actually find you, and confront you about the matter.

They could show up at your door at 2 AM, demanding answers. Not only will you have to deal with the confrontation, but your ghostee will be MAD and not so understanding. Good luck.

#2 Making the situation worse. Yep. You just made a sort-of awkward situation MUCH worse. People are understanding. Even though you think they will throw a huge fit and yell at you for not being interested, most of the time people will not react this way.

They may be bummed out, but usually a spurned lover won’t go crazy. By ghosting them, you are immediately fueling and lighting their fire, making a simple situation horrible.

#3 Retaliation. Some people may be above this, but there are a lot who aren’t. By retaliation, I’m talking revenge. There are people out there that will be so hurt and confused by you, that they will go out of their way to hurt you in return.

Did you send them some racy photos? You may be surprised to find that they could show up on the internet for the world to see. Now, that may be extreme—but it’s a chance you’re taking by ghosting. [Read: 12 devious ways a crazy ex can get their revenge]

#4 Future problems with dating. People talk. If they see you’re dating someone new, it just might push them over the edge and cause them to do something a bit drastic… like telling your new fling that the second you’re done with them, you’re just going to run off without a word.

This could cause so many problems down the line, if you’re really interested in someone, and they find out you ghosted a former flame. It could turn them off completely, even if you wouldn’t do that to them. Because, honestly? What kind of person just up and leaves without a word? They may find that behavior inexcusable and decide they don’t want to pursue anything further with you.

#5 Crappy self-worth. Guilt? Remorse? Those feelings could be the real deal if you’re someone who ghosts often. Only if you have a heart, though. If you put yourself in the other person’s shoes, you may realize that what you’re doing is inconsiderate, and even cruel.

You may start feeling bad about yourself because you realize that you haven’t been the best person you could be. That will certainly change your self-worth.

#6 Karma. What comes around, goes around. If you’re someone who is frequently ghosting and leaving people hurt, angry, and confused, then chances are that not many good things are going to come to you.

Whether you believe in karma or not, ghosting itself has consequences that function the same way as karma. Next time your car breaks down, or develops a mysteriously punctured tire, just think about if you’ve recently ghosted someone—because you may be paying the price.

#7 Disappointment from others. When people find out you ghost, it may change their opinion of you. I’m not just talking about future potential lovers, either. I’m talking about people in general, including friends and family.

You may have made a new friend and divulged the truth about how you ended things with your previous lover, and they might think differently of you—they might think negatively of you. It could potentially cost you a friend, because you couldn’t muster the courage to communicate. [Read: 17 bad friends you should unfriend from your life]

#8 Losing out on something great. Seriously. It could have been way too early in the relationship to decide that you’re not interested. By ghosting your significant other, you could have lost out on something really great. Ghosting means never giving someone the opportunity to make a case for themselves. Shame on you!

#9 No future chances. If you ghost someone, and later realize that maybe they were better than you thought, and you want to try things again, you most likely won’t have that chance. By just cutting them out without a rhyme or reason, you’ve just ruined any future chances.

You can’t abandon someone without even a single word, leaving them wondering and hurt and upset, and then expect to just waltz back into their life. No way. Not a chance. [Read: 10 signs your past relationship is holding you back from a better life]

#10 Inability to break up normally. If you end up dating someone wonderful and you’re together in a real relationship for a long time, but they one day decide that they’re not your soul mate, you will lack the experience to make a clean breakup.

You won’t know what to say, or how to make things right—and you’re in a situation where ghosting is not an option. This could potentially lead to you staying in a relationship that you’re unhappy with, solely because you just don’t know how to break up.

[Read: 5 signs of ghosting and 5 ways to deal with it]

We all know ghosting is just NOT the way to go when breaking up with a person. Those of you who think it’s a good idea… maybe you should reconsider. The consequences above just may make you think twice before ghosting your next victim. 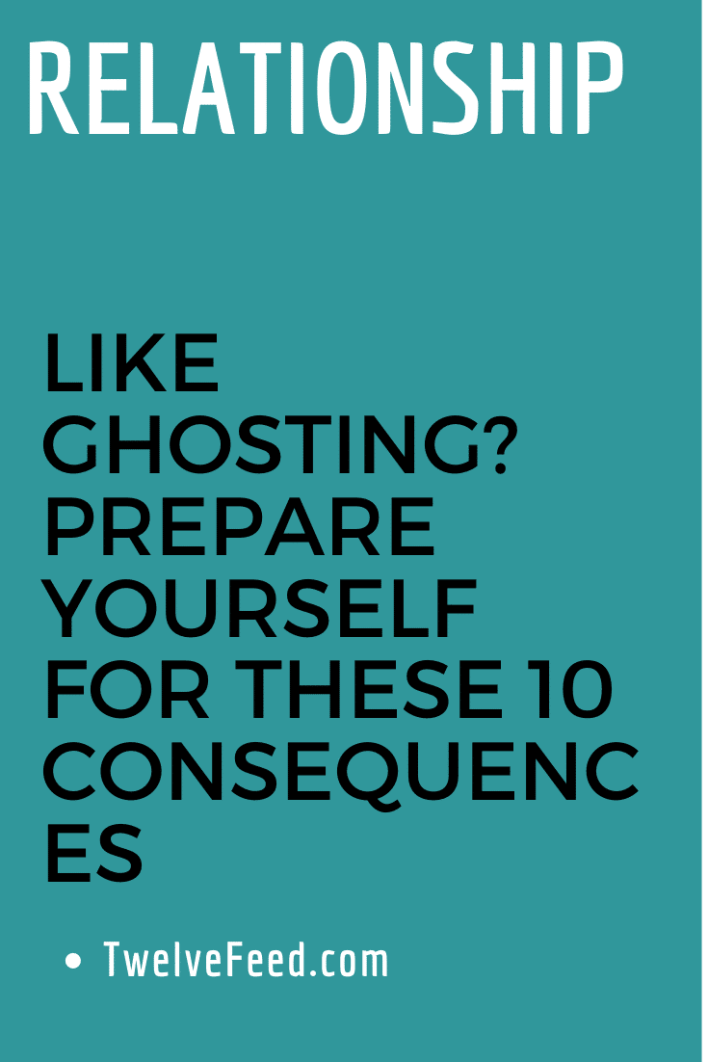 8 Healing Steps to Help a Friend Get Over a Breakup