Not all men are interested in doing the nanny, and not all nannies want their bosses to hit on them. It’s the truth, but apparently there are a lot of cases like this coming to light.

With all the news about celebrities taking leave of their insanely attractive and successful wives for their less accomplished au pairs, you can’t help but think that there might be an underlying norm in our culture of husband-nanny relationships.

Let’s take a look at the transgressors in the media

These famous celebrities all had affairs with their children’s nannies.

#1 The latest was Ben Affleck, whose she-nanny-gans allegedly started after he and Jennifer Garner broke up. But when the existence of the insanely hot nanny came to light, any other reason for their divorce was chucked out the window.

#2 Jude Law‘s affair was probably the most sensationalized. This was around the time that Sienna Miller was gaining substantial ground within the acting community.

#3 Arnold Schwarzenegger, inarguably the most famous baby-daddy of a nanny on the planet, ended up with a hefty amount of child support to pay, while still married to a Kennedy.

#4 Ethan Hawke was married to Uma Thurman, one of the biggest female powerhouses in Hollywood. After their divorce, he married their nanny.

#5 Last but not least, there was Robin Williams. He married his babysitter after he and his wife divorced. Valerie Velardi was an actress as well.

This then begs the question: How did these guys end up falling in love *or in lust* in the first place? [Read: Why do men cheat? 3 big reasons + 27 more]

Why is this happening?

Celebrities are major tabloid fodder, so it’s understandable that their transgressions will be highlighted more than they would be if they were regular people. You’d think that maybe it was just them, but apparently, us little people aren’t immune to this sort of situation. Just look at what happened to these ladies.

We can’t call it a trend, because that would be like calling human nature a trend. The fact remains, however, that there is a cause for concern about some men’s frequent exposure to their baby-sitter or nanny. Here are some reasons why these affairs are commonplace.

#1 Who’s your mommy? Sociologists say that men are inclined to be more attracted to women who exude the mother figure persona. When a guy sees the nanny with his kids, he knows she’s not their mother; however, there might be a small chance that their subconscious relates to the nanny as a mother.

#2 Let’s have a baby. There’s also the case of men associating child-rearing with fertility. It’s another way to say that their bodies betray them because they’re looking for someone to impregnate. [Read: 10 deceptively simple reasons why men cheat on the best of women]

#3 Men and their sensitive side. Dads are more open when their kids are around. They are usually at their most vulnerable whenever they spend time with children. If the nanny is around, she will be privy to a very personal side of the man who employs her. If it turns out that they are easily attracted to that, the idea of an affair may cross their mind.

#4 Too close for comfort. A study showed that potential couples who spend a lot of time with each other are more likely to develop a relationship. That could be the reason why workplaces and schools are the most common places where people meet their life-long partner, and unfortunately, often their backdoor lovers as well.

But having a nanny around is sometimes a necessity. It’s impossible to write off the idea just because there are risks to your existing relationship with your partner.

It’s also very unwise to choose a nanny based on their appearance or age. If you focus too much on that factor, you won’t be able to see the important points, like how good they are with kids and whether or not they are trustworthy enough to let into your home.

So how can you prevent the clichéd Nanny-Daddy affair from happening at all, if you need to find someone who can take your position when you’re out of the house? [Read: 13 lusty signs of attraction you need to keep an eye on]

Which men are the most likely to stray with the nanny?

If you look at the aforementioned list of celebrities, you can see a few common factors stringing their different lives together.

#1 They’re all rich and powerful men.

#2 Their wives are rich, powerful, and accomplished women.

#3 They have nannies for varied reasons, but they all relate to needing someone to help out with their busy lifestyles.

It’s too wide a scope to actually consider these reasons as a basis when looking out for nursery room affairs. Generalizing won’t help, in case you’re wondering if it will happen to you. But here are a few factors you may want to look into. [Read: 16 very subtle signs your husband may be cheating on you]

#1 Egotistic husbands. Experts say that egocentric men are the ones who are more likely to cheat with the nanny. How so? Because it’s how extremely narcissistic people work. Knowing that something will put them on top of the food chain gives them grounds to do it in their minds, ergo getting it on with someone submissive is okay. [Read: 10 clear signs you’re dating a self obsessed narcissist]

#2 Submissive nannies. These are nannies who don’t seem confident in their line of work. Being an au pair is a serious job, no matter which way you look at it. If your nanny forgets what she’s supposed to be doing, that’s when the trouble starts. Not all nannies are submissive folk, but you can see how that tendency can develop when someone is paying you and is marginally more successful than you are.

#3 Neurotic husbands. These men are also control freaks. They need to dominate something and put it under their control. When a nanny they chose complements that need – meaning that they lean more towards being insecure and pliable – they will become prime targets for the wandering eyes of questionable husbands. [Read: 20 signs of a control freak who wants everything in control]

#4 Husbands who put too much value on their wife’s status. Unfortunately, because they are egocentric, they choose to acquire trophy wives. That’s not to say that they never fell in love, but you can’t ignore the fact that the ex-wives of the celebrities listed above are insanely awesome women. The downside to this is that the type of women these men go for are not ones that they can mold or manipulate. This can then lead to finding an alternative who they can control.

#5 Domineering wives. There’s a difference between a woman who is confident and assured, and one who oversteps her boundaries and ends up overshadowing her husband’s role in the marriage. When this happens, it can lead to resentment from the husband, which may be eased by someone who is readily available and open for communication. So, who is willing to provide that? Someone who is paid to care, maybe? [Read: Why men feel emasculated and the repercussions of it]

What should you do to keep this from happening?

If your husband is a cheating bastard, there’s not much you can do about him having an affair with another consenting adult.

If, however, hiring another woman to take care of your children worries you, you need to start fixing things at home beforehand. And it all starts with how you and your husband feel about each other.

Spend more time together, have more sex, take a trip, talk all night – no matter how you choose to do this, focus on your marriage, and not the external factors that are bothering you, like hiring a hot nanny. [Read: The 16 most important secrets to a really happy relationship]

If she’s already present, she probably doesn’t give a hoot about you and your marriage problems, unless it’s affecting the children. And if you think an affair’s already started, you better nip it in the bud by confronting your husband *calmly and logically* before things get out of hand.

When you can’t control the outcome and it’s already too messed up to begin with, it’s best to start putting your ducks in a row and making sure the children are safe and taken care of. Other than that, you better hope you didn’t hire a wolf in Mary Poppins’s clothing. 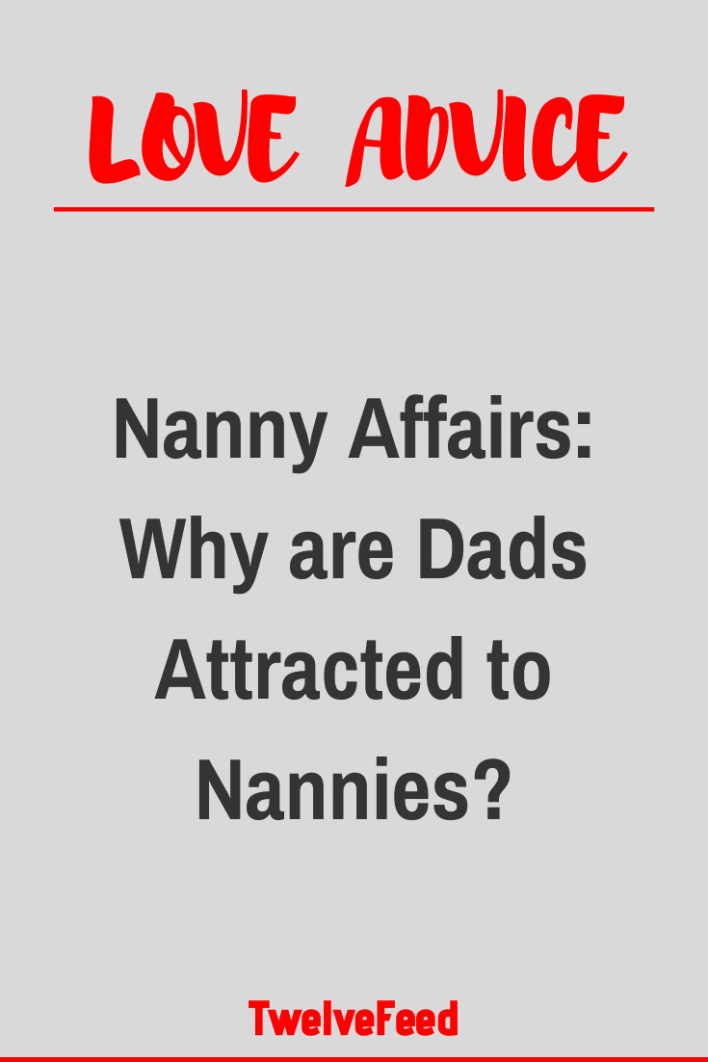 10 Things You Should Never Lie About on a First Date

15 Ways to Tell if Someone Likes You without Asking Them