As my friend hastily packed to escape from New York City before the rumored shut down, she asked me, “So, has the global crisis made you think less about your breakup?”

“Not really,” I replied.

My ex and I started dating the spring of our senior year of college, but we’ve known each other since we were freshman. After graduation, I moved to New York for my analyst job at a financial firm and he ended up getting a consulting job based in Seattle, his hometown. For his job, he traveled every week all over the country, so we started meeting up in different cities every weekend. It was exciting, and every time I saw him, it felt like a vacation. After about a year, he started a new job in Portland, Maine, and I was so happy we were finally on the same coast. I helped him move in and went up almost every other weekend.

On Valentine’s day, he came down to New York. The weekend was special because it was also very close to our two-year anniversary. I should have known when I got him a $75 bottle of champagne, his favorite dessert, and lingerie for Valentine’s day and he got me a box of sweethearts that we were not on the same page. That Sunday, he dumped me. He told me we were too different and he’d been unhappy for awhile. I felt blindsided. Two days before, he let me buy plane tickets to visit him in Portland a couple weeks later. The day before, we cuddled and he fell asleep between my legs. That morning, he made me pancakes as we talked about how many kids we wanted. The breakup didn’t even feel real. It wasn’t a discussion or a conversion. After two years of being partners and making every decision together, he shut me out.

Two weeks later, he came back to New York and stayed with a friend. After not talking since the breakup, we agreed to meet up for coffee, but the night before he bailed. He said that “it wouldn’t be beneficial for him to talk to me in person” and he was “still figuring things out.” I was just so mad because it felt like he didn’t consider my feelings at all. I was half of the relationship and he was not giving me the closure I deserved. I couldn’t wrap my head around how someone who supposedly loved me for years could now treat me like this.

After that, I decided the closure I was going to get was knowing that I deserved better. I threw myself into work, exercised every day and planned travel with my friends. A week or two in, I started to feel like myself again. Then it all came crashing down.

I think I was in denial about how serious coronavirus was at first, but it started to have serious ripple effects in my life. Everyone started working remotely. Having that structure of going to work every day and feeling productive and spending time with people outside of my personal life really helped me. The idea of sitting in an empty apartment alone gave me a lot of anxiety. It was a wave of emotion I was not expecting. There were also rumors starting that New York City was going to be shut down. Most of my friends left to go back home. I had to cancel all my fun trips I planned for the coming weeks and reality set in that I was probably going to have to be quarantined alone.

All the ways I would normally deal with a breakup were gone. I usually try to keep busy and fill my life with happy things. Yet in this environment, I couldn’t travel. I couldn’t go out with friends. I couldn’t go to my exercise classes. Work wasn’t even the same! Within a month, major anchors in my life either disappeared or significantly changed.

Needless to say, I was not feeling normal anymore. No one was! In the heightened environment of anxiety and loneliness, I was feeling it more than I have in my entire life. This period would have been a great time to be in a relationship. I would have loved to have him as a support system, go up to Portland and get quarantined with the person I loved. So, his absence felt even greater. He didn’t even reach out to see if I was okay.

Well, I went to therapy for the first time. It’s never been something I considered, but I like to talk and talking about my anxieties made it better. There have been additional stressors in my life, as I also got serious health news a few months ago. My ex was one of the people with me when I had to have emergency surgery. Therapy helped me process all the changes that were happening in my life.

I called and FaceTimed my mom, my sister, and friends a lot. I’m lucky in my life that I have so many great friends in New York and in different places. I would really work those time zones when I woke up early or couldn’t fall asleep late at night. It was nice knowing that even though I felt really alone, I wasn’t.

I tried to take care of myself better. I started working on long-term goals that only have to do with me. I started studying for the GMAT and thinking about graduate school. I ate better, did yoga every day, and acknowledged things that made me feel better and things that I am grateful for.

It’s hard to pity yourself and your breakup during a global crisis. We are all facing so much uncertainty and stress, and I understand that other people are in much worse situations than I am. It just really seemed that as soon as I started making real progress in recovery, I had a new crisis to deal with. I just felt so helpless, as I didn’t know how to make myself feel better. It’s daunting to think we don’t know what will happen or how long this will last. For me, that is the scariest part about the global crisis and my personal one.

But in a weird way, the universe is forcing me to confront and deal with everything. I put a lot of pressure on myself to be okay and get over things quickly, and I have to stop judging myself and putting a timeline on healing. I still feel sad and miss him sometimes, but I also feel empowered when I feel full by myself. In this environment, I have all the space and time to heal. I have no choice but to confront my issues of letting go and not feeling in control. Self-care and kindness is not an option, it’s a necessity. I have already learned it’s okay to feel overwhelmed and unbalanced sometimes, because I know that these feelings are temporary. I am learning to be my own emotional rock and needing no one but myself.

So, no, the crisis did not make me think about it less, but differently. It has made it harder and more lonely but also more reflective and inward. There are no distractions, and I am forced to find closure and acceptance in myself. 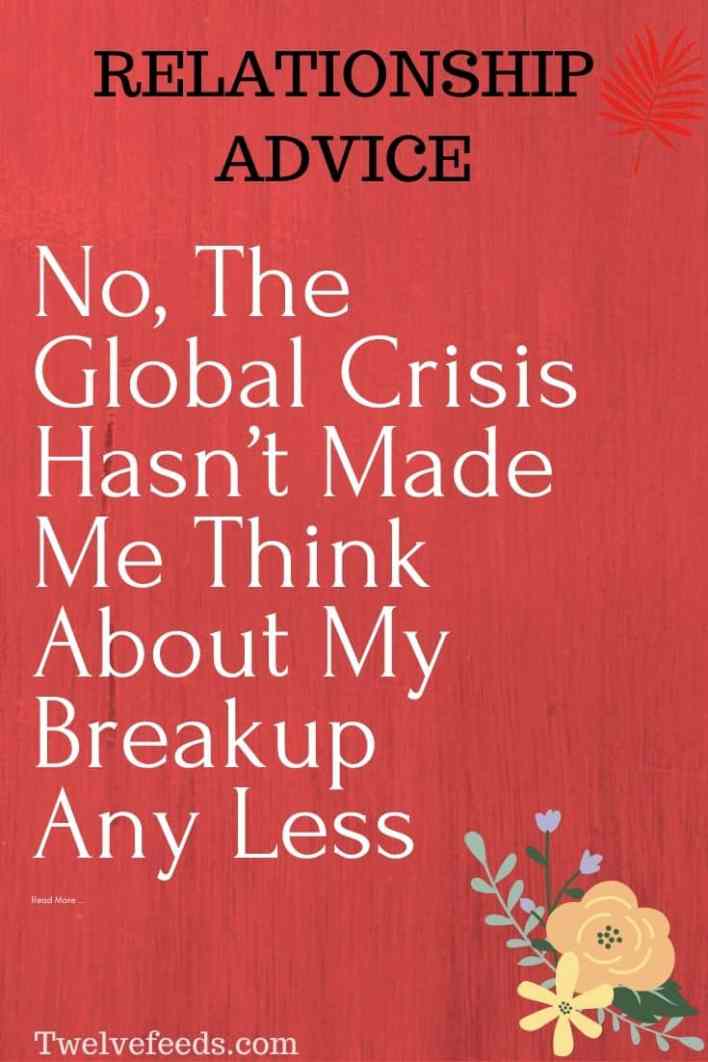 I Don’t Know Who Needs To Hear This, But Don’t Answer His 3 AM Texts

So Maybe This Could Be Everything To Me