We’ve all done it. And by “it” I mean we’ve all fallen into the trap of flirting with people via the internet. And for those of us with a significant other sitting next to us on the couch munching on Cheetos and flipping through every sports channel there is, online flirting can become a bit of a problem if you take it from innocent to something more.

It can happen to everyone. Whether you’re just replying to a silly comment on Facebook and adding that little wink emoji, or if you’re actually in the online dating community *Tinder?* just for the fun of it, online flirting can cause many problems in your real relationship.

One little comment taken too far can be the end of something real. Who would want that? I know I didn’t when a simple wink face turned into a full-blown argument and eventually the demise of one of my relationships… yikes! [Read: Emotional cheating and 10 bad things it can do for you]

Is online flirting really cheating – How do you know if you’ve crossed the line?

I’ve been in a relationship or two that have gone south because of too much online flirting. Not only have I been the victim, but I’ve also been one to flirt quite a bit as well. Had I known the warning signs about what is considered too far and what’s not, maybe I could have saved the relationships.

Take it from someone who has been on both ends of this controversial subject and read all the tips I’ve shared about online flirting and how to know if you’ve made the mistake of taking it too far.

There a number of ways to know for sure whether or not you flirting online is actually a form of cheating. But most of all, you need to remember that cheating doesn’t have to mean that you’re engaging in physical intimacy with someone other than your committed partner. It can even just be purely emotional – and that’s where cheating via the internet can be applied. [Read: 10 annoying partner habits that can drive anyone to cheat]

#2 You feel the need to hide it from your significant other. Nothing spells out “cheating” more than feeling guilty for interacting with someone. Now don’t get me wrong, you can occasionally get away with sending a flirty comment here and there, but if it gets to the point that you’re stuffing your phone in your pocket the second your partner gets in the room, then you’ve got a problem.

Not to mention if you’re lying about it as well! When your partner asks who you’re talking to and you lock your phone and say, “Oh, umm… just no one? Er – I mean my sister,” then you’re cheating on them whether you want to accept it or not. [Read: How to stop lying to yourself and your partner]

#4 If your flirting leads to meetings *or the discussion of meeting in person*. This is really obvious cheating. If you’re flirting and chatting enough with someone else to warrant an actual meeting, then you’re cheating. Especially if your significant other is unaware of what’s going on. You don’t have to be getting intimate with that other person for it to be considered unfaithful.

Cue the guilt and lies, you cheater! *Disclaimer: you can be friends with people and spend time with them just fine. But when flirting is the #1 way you communicate with them, then there’s more than just friendliness going on.* [Read: 15 really obvious signs of flirting between a guy and a girl]

#5 If you develop feelings for the people you flirt with. Or rather, just a person you’re flirting with. When innocent flirting turns into real feelings for them, you are cheating on your current partner. You are not being fully faithful and committed to them in the way you should be.

Okay, okay, I get what cheating is, but when does my flirting actually cross that line?

Flirting is probably harmless most of the time, but there is a line that can be crossed and sometimes you can’t get back over it. If your flirting is accompanied with any of the following, you may be crossing that fine line.

#1 It’s very frequent. Occasional flirting is fine. You can make a comment or like someone’s half-naked picture every now and then, and it’s completely okay. But when you’re flirting with everybody that’s out there on the internet all the time, you may be crossing a line that your partner won’t be too comfortable with.

#2 When you get excited to get back to your phone or computer so you can flirt. You may not notice it right away, but if you’re crossing the line then you are probably always excited to hit up Facebook or Tinder. I’m sure your significant other would NOT be happy with your super excitement over flirting with other people.

#3 When you go out of your way to make it happen. Casual and innocent flirting is not something people go looking for. It just happens naturally and you reply flirtingly. But if you’re seeking out opportunities to flirt with someone online, you’re just about to cross that very fine line between innocence and potential cheating. [Read: 13 lusty signs you’re starting to get sexually attracted to someone else]

#4 If your partner notices a difference in your behavior towards them. This one is pretty big and basically means you’re standing ON the line. When your lover notices your behavior has changed – and you know it’s because of your fun flirting online – then you may as well just take a step further because you’re almost over that line.

#5 If you silently defend it. Does anyone else have mental conversations arguing with themselves? No? Just me? Okay… but honestly, if you are feeling the need to justify your flirting – even to yourself – then you recognize the line and that you may be crossing it. Innocent flirting doesn’t make you feel guilty. [Read: Love triangles and its confusing complications]

#6 If your flirting is leading to any other emotions. BEEP BEEP BEEP. Cue the red lights and loud sirens because you have officially crossed the line from innocent flirting to cheating. When casual flirting become frequent and you develop feelings for the other person, then you have definitely crossed that invisible, yet very prominent, line and are in for some trouble.

Casual and innocent flirting online is not only really fun, but it can be healthy for a relationship as well. But if you’re investing too much time into it and not enough into your special someone, then you’ve got a problem. 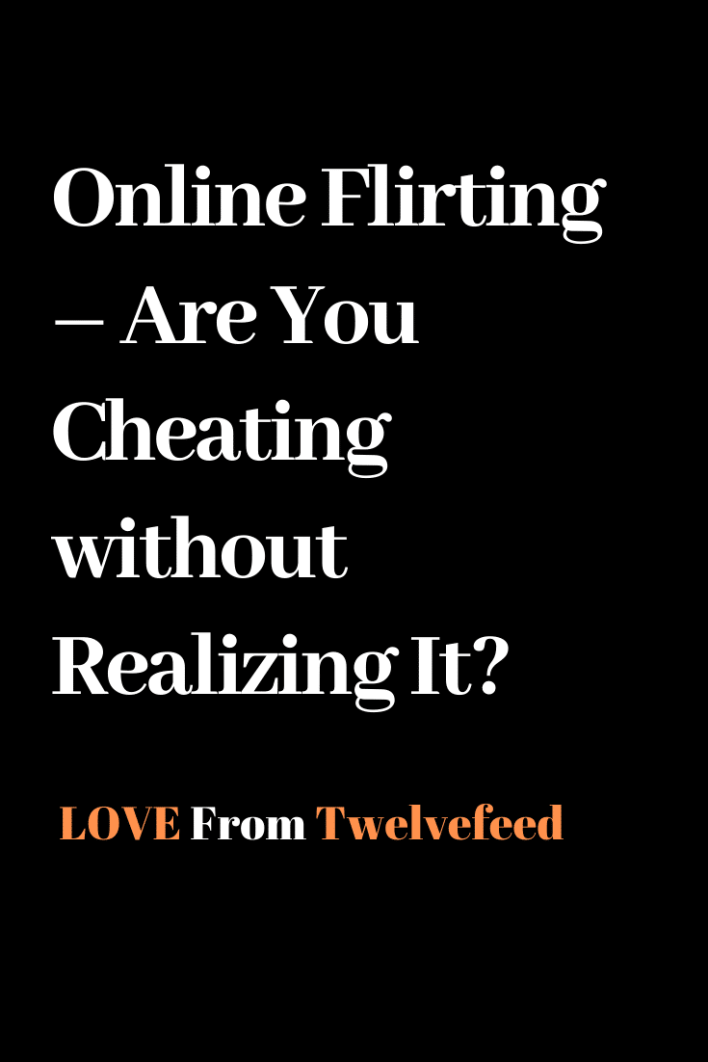 8 Subtle Hand Gestures to Make Your Date Fall for You