Okay, if you pay it forward, you probably won’t change the Mideast Crisis or solve world hunger, but what it will do is make someone happier, if even for a moment. And, if nothing else, change one person’s life for the better, which is much better than just leaving the world to itself, no?

Paying it forward is a notion that is the opposite of paying someone back. It means that when someone does something nice for you, instead of paying them back, you pay it forward to someone else and so on….

10 ways to pay it forward today

If you are looking for small incremental changes that you can do on a daily basis to pay it forward and make small, yet, significant, changes in the world around you, try these pay it forward things.

#1 Take and return someone’s shopping cart for them. I know, totally stupid and we ALL hate to do it. But, you will be paying it forward for two people. First, the poor guy that gets paid to collect the carts and second, that person that has three kids in a car and is trying to get everyone buckled in. You have no idea how much you will make his or her day.

#2 Leave a Starbucks gift card in the ATM with a little note saying “have a good day.” Nothing says “awesomeness” like a free cappuccino. Chances are good that the person you leave it for will leave a nice tip for the barista… see how it works!

#3 Stop to let someone take a turn in the height of traffic. Tricky, you might piss off the person behind you, but a little wave to go ahead can relieve someone’s stress. Who knows, maybe they are way late for something important and you just saved their job… or, even more severe, life.

#4 If someone has only a couple of items, let them in front of you in the grocery line. Right? Who doesn’t hate bouncing from one crowded line to the next at the grocery store juggling two gallons of milk and a tub of butter? If you have a buggy full, then let them pass before you. It might cost you like two minutes, but it will save them tons of time.

#5 If you see someone struggling with a heavy box, offer to help them. The worst feeling is standing in public and struggling with an oversized box or something super heavy. If you ever want to feel all out on your own, try handling something with too much weight and awkwardly shaped while everyone around you passes by.

#6 Tell a complete stranger that you like their outfit. Paying it forward doesn’t always have to come in the form of money or a favor. Sometimes just telling someone they look nice is a good enough thing for humanity.

Putting that person in a good mood, they are more likely to share the wealth and brighten someone else’s day like a contagion.

The key is to make sure that you are leaving so that it doesn’t come across as you hitting on them. That way, they know you were just buying them a friendly drink.

#8 Clean up your own table by stacking things at the restaurant. Sure, they get paid to clean up the table, but stacking your things nicely so they can clean it in one fell swoop is an excellent way to make someone feel good.

#9 Leave hand me downs on someone’s porch who you know can use them instead of reselling them or taking them to the thrift store. If you drive by a house with little kids running around, and you just have a feeling that they could use some hand me downs, drop them on their stoop later in the evening unnoticed.

In order to pay it forward, the key is to make someone feel good, not indebted or pitied. It is nice to get a surprise you need without the humiliation of thinking someone is pitying you or thinks you need their help.

#10 If you have the lawnmower out, cut your neighbor’s lawn too. It will take you, like, ten minutes but will make a huge impact on their weekend when they come out, and something is off their “to-do” list. You already have it fired up, so go the extra mile. 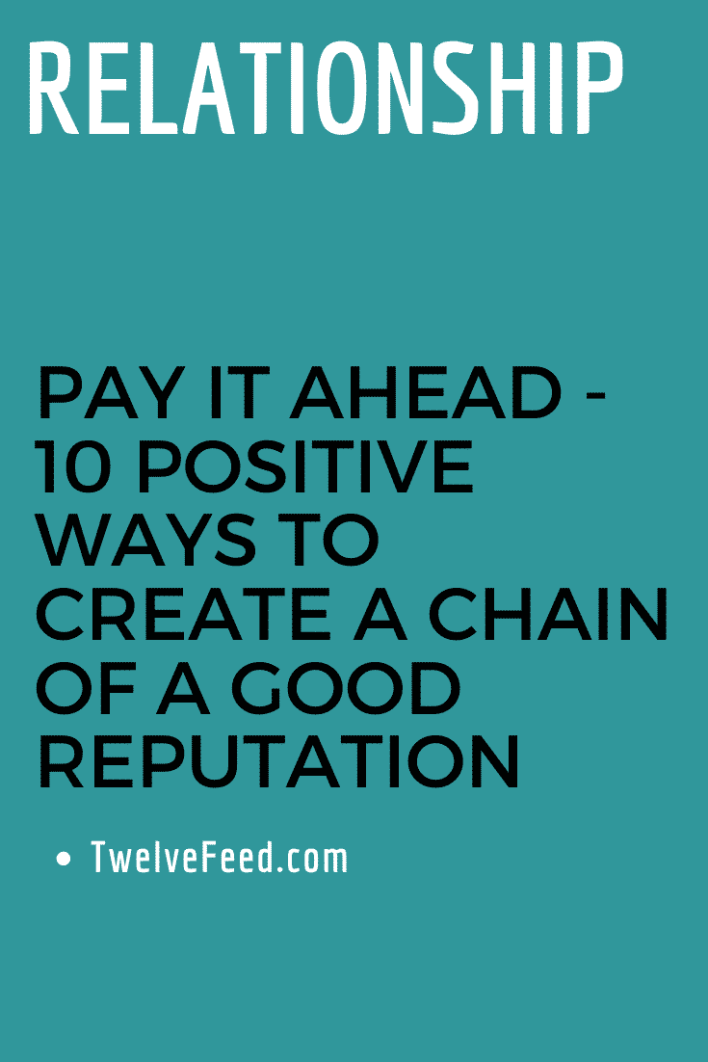