Having a crush on someone doesn’t always mean you want to date them. In fact, you can have a platonic crush and be head over heels for someone – as friends. If you’ve ever watched someone from a distance and just wanted to be their friend very badly, you know how it feels to have this type of crush.

But how do you proceed when you have these feelings? Believe it or not, there are far more people out there who’ve had a platonic crush than would admit it. Why? Because sometimes it’s more embarrassing to admit you really want a friendship with someone than it is to admit you want to be involved with them romantically.

The power of a good friendship

As you get older, you lose friends. That’s just how life works for a number of reasons. When you’re young, you become friends with people who like the same things as you. If they like pizza, you’re their friend. If they like kickball, you befriend them.

But when you grow up and realize that a good friendship is so much more than common interests, you end up with far fewer friends. Making a connection with someone on a platonic level is rare. There aren’t many people who share your values and beliefs. For that reason, you need to make sure you’re going forward and securing a friendship with anyone you have a platonic crush on.

What having a platonic crush means and how you should proceed

How you know if it’s a platonic crush

First, we have to figure out if what you’re feeling is actually a crush of platonic nature. If you’ve felt the below things, it’s definitely a platonic crush and you should make moves to secure that friendship.

#2 You frequently check their social media. If you’ve found this person on social media and have a platonic crush on them, you’ll be all over their feed. You’ll go to their profile for updates and you may even turn on their notifications. That’s all because you want to know what they’re up to. Their ventures are of interest to you.

#3 You value their opinion highly. If you seek approval through this person, it’s definitely a platonic crush. This isn’t so much about you being someone they like, but it’s more about their opinions and thoughts being of value to you. That’s why you care about what they think about you.

#4 You have a strong desire to get to know them on a deeper level. This is a very similar feeling you get when you meet someone you may want to date. Except with a platonic crush, it only has to do with friendship. If you just want to talk to them and get to know them deeper, it could be this type of crush.

#5 You idolize them in a way. You basically hold a person up on a pedestal. You met them, talked to them, and now you look up to them. It’s like you care for them as a good friend before you’re even friends. That feeling is what a platonic crush is.

#6 But you don’t want to get in their pants. You can have a platonic crush on literally anybody. It doesn’t have to be a specific gender and it can even be someone you’re typically attracted to romantically. The difference is that you’re not at all into them in those ways.

What to do when you have a platonic crush

So you’ve determined you have a platonic crush on this person, what next? While you may think it’s easy to start a friendship, it can be a little more complicated than just saying, “hello.”

#1 Ease your way into it. If you go full force at someone trying to make them your friend, it’ll come off as creepy. They’ll get weirded out and you’ll give off a stalker vibe. Think about how you made your current friends. You eased into it. You got to know them and eventually became friends.

#2 Strike up a casual conversation. If you’re around your platonic crush, just strike up some causal conversation. If the two of you have things in common and vibe well, it’ll likely turn into something more than just chatting about the weather.

#3 Forget the fact that you’re “crushing.” Chances are, you’re pretty excited about this person. They might make you nervous and your desire to be their friend could cause you to act a little crazy. So just forget about the fact that you like them so much. Just focus on talking to them.

#5 Don’t force anything. When conversation is forced, it’s super noticeable. It’ll make the exchange really uncomfortable. So don’t force the conversation to keep going. If it dies out, let it and try again some other time.

#6 Ask them meaningful questions. Just like you would a romantic crush, you should be asking engaging questions to someone you want to get to know better. You can’t have a platonic crush without wanting to pick their brain about stuff. So do just that!

#7 Don’t try too hard. Same as forcing conversation, trying too hard will be obvious. You’ll come across fake and like you’re just trying to get them to like you. Both of which aren’t good.

#8 Just be yourself. Don’t try to be someone else just because you want to be someone’s friend. If you do, the friendship won’t be real and it won’t last long. Being yourself is the only way to attract the type of people who will stay in your life.

#9 Let it remain just a platonic crush. You can’t always be friends with each person you form a platonic crush on. In fact, you may form this type of crush after you meet briefly at a bar and never see that person again. So if you’re not able to be friends, just accept it. 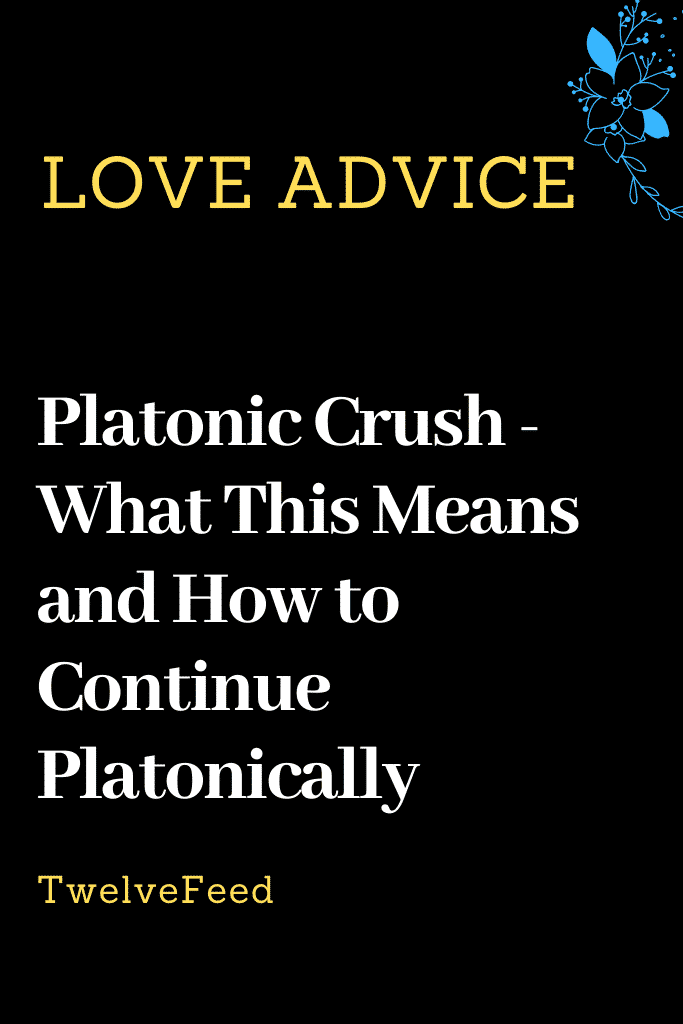 Just How to Stay Single Till You're Seriously Prepared to Socialize

Will He Return? 10 Subtle Indicators He'll Be Back or Not