As teenagers, it’s practically expected that we’ll pick up some terrible form of advice or another regarding sex, orgasms, and the opposite gender, but what age do you drop the dirt and start getting educated?

Sex myths and poor sex advice flood the Internet by way of articles, and even in famous magazines. Body misconceptions about pregnancy, penis size, semen, STDs and even weight loss have been some common topics in the sexual rumor mill.

So who’s spreading such slanderous sex-myths? To be honest, nobody knows. The thing we do know is that these bad tidbits of naughty advice are out there for the world to see, giving men and women everywhere reasons to fret over bad sex, and leading them down the path of being a misinformed lover.

Sex myths you should never fall for

Ready to get your sexual myths busted? We’re looking at 8 pieces of poor sex advice for you to avoid.

#1 Pulling out won’t get you pregnant. Many of us probably remember hearing this as teenagers, and the shame of it is this rumor is still floating around. A hilarious Internet meme was floating around not too long ago that showed a young man with a baby and loosely read: Pulling out leads to babies.

For one thing, it’s entirely possible for the guy to pull out a little too late. Ejaculation can come out at an alarming speed, after all. Secondly, and more importantly, small amounts of semen can be released even before a man orgasms. This small amount can be enough to get a woman pregnant.

#2 It’s not the size, it’s how you use it. Sorry to be the one to break it to you, but size does matter. Women can shake their heads at this statement all they want, but would these women prefer a 2″ lover? Likely not. Nobody wants to feel a pencil dick inside them. Both girth, and to a lesser extent, length are important in the art of sexual lovin’, as well as the aforementioned skills in between the sheets.

#3 Pre-cum doesn’t have semen in it. Why yes, sir, many studies have found that it does, and therefore pre-cum might be able to get a woman pregnant. In fact, any sort of live semen coming into contact with the vulva can turn itself into a sexy swimmer and get your girl pregnant.

#4 You can lose weight from sexercise. In a possible effort to make exercising seem more appealing, some loudmouth decided to spread the rumor that you can burn calories and shed those pounds by having vigorous sex on the daily. While we wish this were true, one sex study done at the University of Montreal found that men burn a mere 100 calories, and women burn 69 per 25-minute sex session. While you may not be dropping pant-sizes anytime soon, it’s certainly a fun way to go about it.

– If you have sex in water. Not sure who made this one up, but it is definitely false. Sperm are Olympic style swimmers, and they can get where they need to go in pretty much any circumstance.

– If you are on your period. While there may be a reduced risk due to the position of the egg, the miracle of conception works in mysterious ways, and your girlfriend could still conceive during this time.

– If you aren’t ovulating. Wrong again! While it’s true that most women commonly conceive during ovulation, many women have gotten pregnant at other times during their cycle.

#7 All orgasms are mind-blowing. While orgasms can be pretty great, not all of them are bed-breaking. In fact, both men and women have reported varied levels of pleasure experienced during orgasm, ranging from weak to OMG! If you’re having a mediocre orgasm one week and an earth shattering experience the next, don’t worry about it, you’re totally normal.

#8 My UTI will just go away. Urinary Tract Infections happen when bacteria makes its way to your urethra. This can happen any number of ways, including improper wiping where bacteria from the anus could get near the opening of your vagina, a man’s penis playing around the anus and then entering your V without a condom on, dirty fingers, or even sweet sugary fingers entering the vagina. Regardless, anyone who has ever experienced a UTI knows it’s no picnic.

Some women absolutely swear by drinking cranberry juice to clear up the infection, saying they can cure it themselves. While cranberry juice is great at flushing out bacteria, it will not clear up your UTI. While your symptoms may have gone away, the bacteria can continue to grow, unbeknownst to you, and cause kidney damage. So if you’re starting to get that burning feeling, your best bet is a visit to your doctor to get some antibiotics.

Be body-aware and don’t follow advice that sounds like a 12-year-old has thought it up. Remember, next time your friend wants to sprout out bad sex advice, make sure you give them a hard reality check and set the record straight. 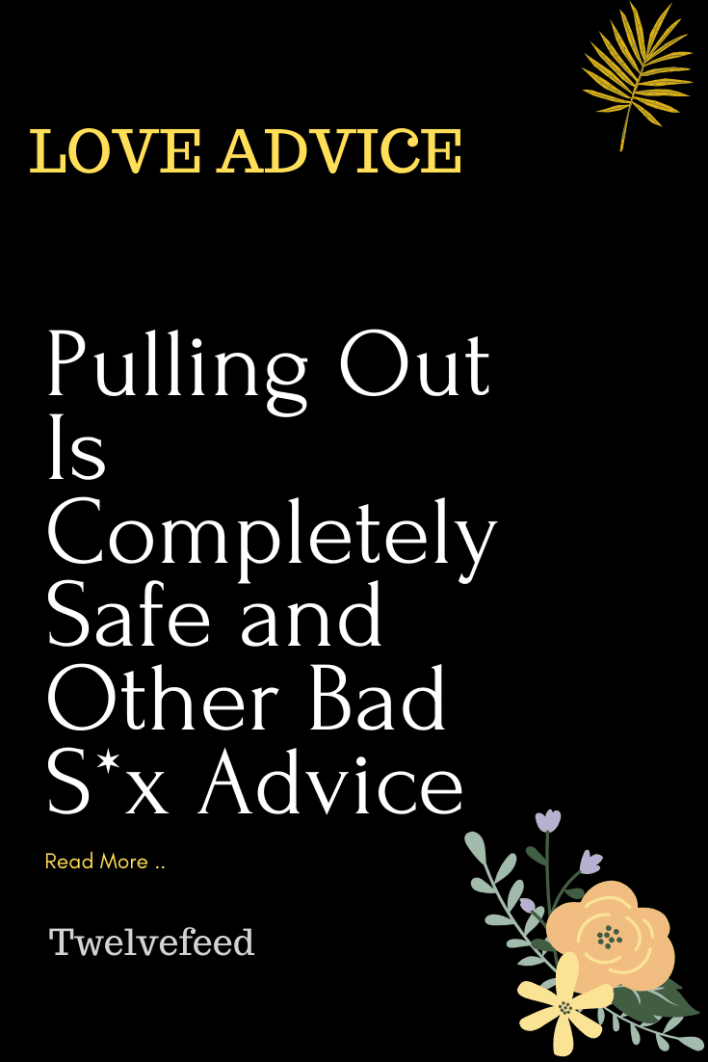 9 Tips to Avoid Online Creeps and Their Creeptastic Ways

What Men Should Do When Given the Silent Treatment