When I was in high school, I would have huge sweat pits by the end of any school dance or house party. No, it’s not because I was twerkin’ on the dance floor, it was because I was anxious. About what? You know, I don’t even know. I guess what people thought about me. So, I laid low in the background, and though I was outgoing, I learned to be quiet.

Being socially awkward sucks. Instead of meeting cool and interesting people, you’re busy hanging out with the chip bowl as you anxiously hold it for support. I get it, oh, I get it. But it’s time to get out of that social slump and work on reducing your social anxiety.

How to stop being socially awkward

It’s going to take some time to stop being socially awkward, but soon enough your pits will be dry *not a bad rhyme*. Don’t worry, if you follow these tips, then you’ll be a social butterfly in no time.

#1 Admit that you’re socially awkward. Don’t pretend and act like you’re not socially awkward. No, you sweating excessively every time you walk into a room is not a natural occurrence. It’s just time for you to admit this to yourself. But lucky for you, you can actually change it.

#2 Figure out what environments make you socially awkward. What environments trigger your social anxiety? Large groups of people? Small, intimate gatherings? You need to know the triggers so that you’ll know what you need to work on. So, the next time you’re out at a party or event, you can be self-aware of your body and mental state.

#3 No one actually remembers. Okay, I know this sounds lame, but you have to understand that no one actually cares about what you have to say. Like, no one remembers that time you made some comment about Britney Spears’ music. Unless you’re Obama, most people take information in one ear and out the other.

#4 Don’t aim for success. Don’t try to aim for success. Instead, look at this as a learning experience for how to stop being socially awkward. This isn’t going to be a one-time thing that you do once and then you’re socially in tune for the rest of your life. This is going to take a long time for you to develop.

#5 Get out of the negative loop. Being socially awkward is all a mental thing. You think you’ll screw up, say something stupid, and people will hate you – I know the whole thing. But you’re going to have to get yourself out of that negative loop because it’s not working for you. Sometimes faking it until you make isn’t the worst thing you can do.

#6 Write it down. You can’t keep your feelings bottled up inside of you… you need an outlet. So, write your feelings down in a journal. Before going out you can write down how you feel, and when you return home, write down how it went, what happened, etc. It’s a great way to later reflect on your progress.

#7 Practice. Yes, yes, yes. I know you have traumatic memories of your parents lecturing you about practicing your flute, but seriously, they were right. You have to practice. So, ask your friends to bring you to parties or events. The only way you can practice is to actually go out.

Of course, there are some basic rules like not to pee on the rug, so, if it’ll help reduce your anxiety, figure out what these rules are. If you feel that you broke them, just apologize… no one is going to kill you.

#9 Leave your house. How can you practice socializing if you don’t leave your house? No, playing video games online doesn’t count. So, you need to make a vow to yourself that’ll you’ll go out to a function at least once a week. I don’t care where you go as long as you have to socialize.

#10 It’s not a big deal if you mess up. The thing about being socially awkward is that you’re worried about screwing everything up, and that’s why you’re awkward. But listen, you’re not going to lose your job, your house, or your best friend. If anything, people will question what you just said and continue on with the conversation. You will live! 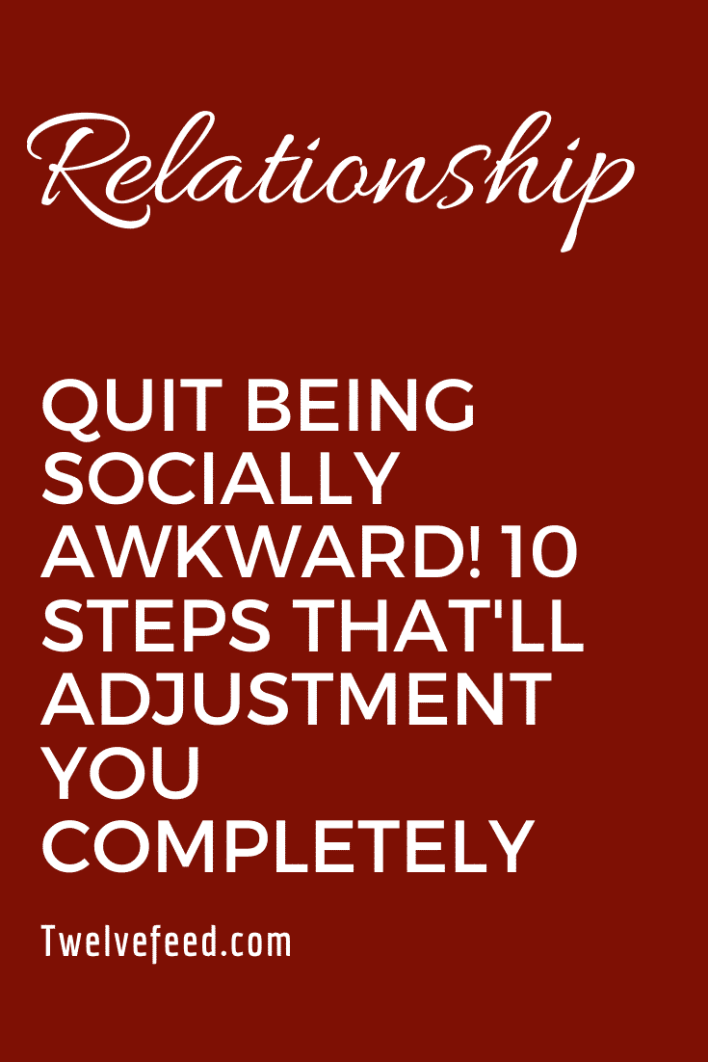