They seriously haven’t been able to stop thinking about you. Even though you truly hurt them, they are very open to forgiving you because they are so invested and still feel all those strong feelings for you. Plus, Cancers are naturally prone to giving out second chances anyway because they know people aren’t perfect.

Libras thrive on harmony, and there is nothing that messes with them more than a fight or conflict that throws everything out of balance. If you truly appear to be sorry and ask for another chance, Libra will most likely give it to you out of fairness, and out of a desire to just want things to be peaceful again- but don’t abuse it.

Pisces are extremely patient people who tend to form strong emotional bonds easily- and those bonds are difficult to break, even when they’ve been brutally hurt. Though they may be a little wary, Pisces tend to be one of the more trusting signs, so if you seem sincere, you’ll likely get them to take you back.

Sagittarius are natural optimists and try not to take life too seriously. Though they still feel the hurt from whatever you did, they also tend to prioritize your better qualities, and if you ask for another chance, they likely will give it to you- as long as they haven’t already moved on to something (or someone) else first.

Aries are passionate and they don’t take kindly to being betrayed by the people they care for. Though they’re likely to be angry and definitely let you have an earful about what you’ve done, if you’re able to wait out the storm and sincerely apologize, they’ll likely be willing to try again- simply because they feel such a strong connection with you.

Geminis are essentially wild cards because though they are kind, loving, and light-hearted, they also can be distant, prone to mood swings, and slightly vengeful. It really depends on exactly what you did, and when they found out about it- if the hurt was too large or they found out at the wrong time, they’ll have no problem cutting you off and leaving you behind, so tread lightly.

Virgos are very particular and it takes quite a while for them to enter into a relationship in the first place, so if you betray them in any capacity, your chances at trying again with them drop down significantly. The main factor here is that if a Virgo believes a relationship can be worked through (and that the person is worth working through for) they’ll potentially extend a hand in forgiveness- so hopefully you caused more joy than pain during your time together, otherwise, they’ll have no problems saying goodbye.

Aquarius people are definitely known for a lot of things, but growth and holding themselves (and their partners) accountable is easily one of them. If you lied, cheated, or broke a promise, an Aquarius won’t roll well with that and will make sure you fully own up to what you did and realize why it was wrong. Yet even with the most sincere apology, an Aquarius likely won’t give you a second chance, except under certain circumstances- and they’ll make it clear if that’s the case.

Leos are fierce and big-hearted, and they devotedly love their friends and partners. Yet Leos are also known for their stubbornness, and they won’t put up with someone betraying and humiliating them. Even if you pull out all the stops with your apology, the Leo has likely already moved on and has let everyone know about it.

Capricorns are naturally wary of relationships in the first place, so they always kind of expected that you would hurt them. Nonetheless, they invested their time, effort, and life into you because of how much they cared, hoping maybe they might be wrong. The moment you hurt them, though, their walls went up instantly, and even though in time they might forgive you they also don’t have any desire to try again- you’ve already proven their point.

Taurus people are very selective in who they allow into their lives, and they don’t put up with anyone who betrays their trust since they rarely hand it out in the first place. They may deep down wish they could give you a second chance, especially if the relationship was long term and you’ve established a consistent life together, but their stubbornness and pride will never let that happen.

If you chose to betray a Scorpio you clearly had some kind of death wish in the first place. Scorpios are naturally untrusting, but they love and invest deeply into those they care about, and they don’t hesitate to show it. Yet when you hurt a Scorpio, you might as well take cover and only offer an apology if you really mean it- though it doesn’t really matter since they’ll likely never forgive you or let you forget it. . 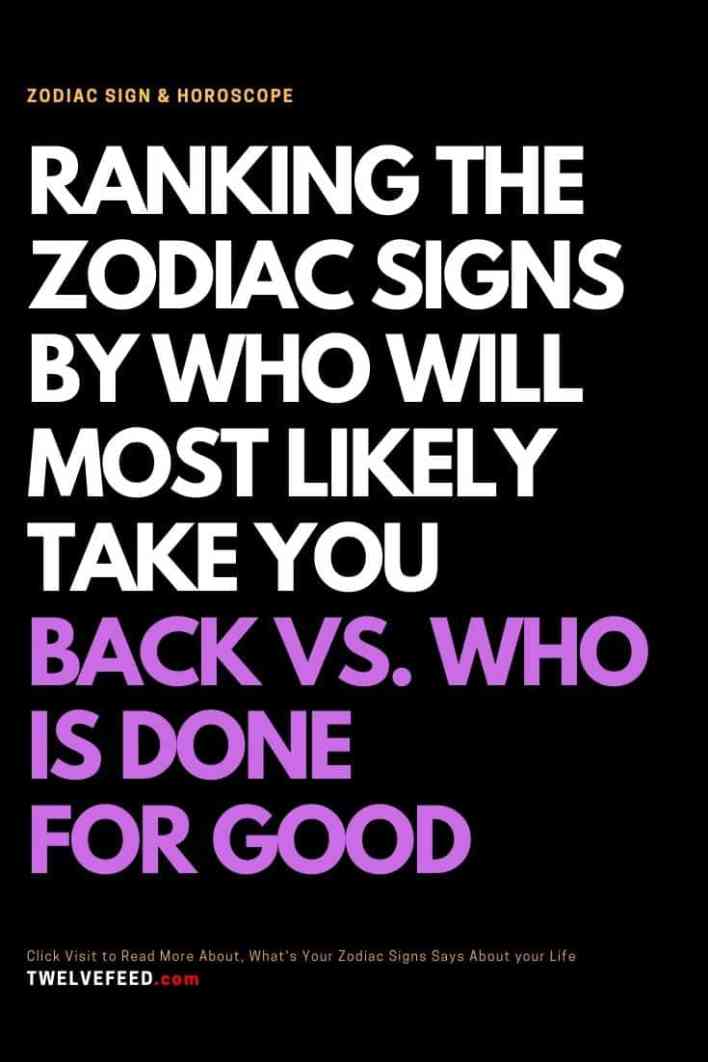 What She Doesn’t Want You To Know, Based On Her Zodiac Sign